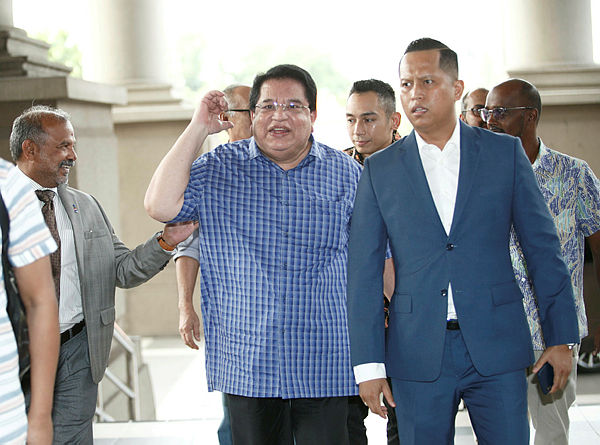 KUALA LUMPUR: Aset Kayamas Sdn Bhd managing director Tan Sri Chai Kin Kong told the High Court here today that he gave out political donations not only to Umno, but other political parties as well when the Barisan Nasional was in power.

Tan: Was it your first political donation?

Chai: It was not the first.

Tan: Is it true that you made political contributions to the ruling party (Umno) and other political parties?

Chai, who spoke in Cantonese, which was then translated to Malay by a court interpreter, concurred with Tan, who said that the RM2 million sought by Tengku Adnan from him in 2016 was on the belief that it was for the Sungai Besar by–election in Selangor and the Kuala Kangsar by–election in Perak in June 2016.

Chai, who had known Tengku Adnan for more than 30 years, said he received the official receipt for the RM2 million political contribution from Tengku Adnan himself on June 14, 2016.

“I received the receipt two days after giving the cheque for RM2 million,” he said, while taking out a receipt from his blazer and producing it to the court.

Tan: Is this the receipt issued by Umno for the contribution of RM2 million for the Sungai Besar and Kuala Kangsar by–elections?

Earlier, when questioned by Deputy Public Prosecutor Julia Ibrahim on the reasons for the RM2 million contribution to Tengku Adnan, Chai said: “At that time, BN was still the government, I gave contributions not only to BN, but also to schools, associations and people in need.”

Julia : Why did you give the contribution to Tengku Adnan?

Chai : It was because Tengku Adnan told me Umno needed it.

Yesterday, Chai, when reading out his witness statement,confirmed that he gave a RM2 million cheque to Tengku Adnan as a political contribution and that the former Federal Territories minister had mentioned to him that Umno needed about RM5 million to RM6 million for its by–election funds.

Tengku Adnan was charged in his capacity as a public servant, namely, Federal Territories Minister, to have accepted for himself RM2 million from Chai Kin Kong via a Hong Leong Islamic Bank cheque belonging to Aset Kayamas Sdn Bhd which was deposited into the CIMB Bank account of Tadmansori Holding Sdn Bhd in which he had an interest, when it was known that Aset Kayamas had connection with his official duties.

The charge was framed under Section 165 of the Penal Code, which provides for a jail term of up to two years or fine or both, on conviction.

The hearing is before judge Mohamed Zaini Mazlan. — Bernama

To be world’s best, you must be able to handle pressure: Chong Wei

PLUS committed to prevent congestion at toll plazas

1.PLUS committed to prevent congestion at toll plazas

2.To be world’s best, you must be able to handle pressure: Chong Wei