Woman, 65, among three burnt to death in Kajang accident 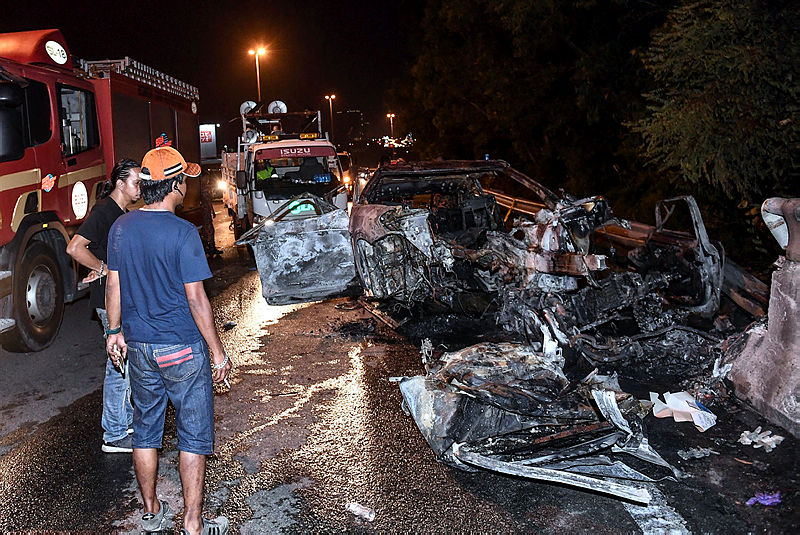 The burnt wreckage of the BMW following a crash which claimed the lives of three people, at the SILK Highway (Kajang-bound), on Feb 5, 2019. — Bernama

KUALA LUMPUR: A 65-year-old woman was among three people who were burnt to death when the BMW they were travelling in skidded and caught fire in an accident at Km6.9 of the SILK Expressway heading towards Sungai Long, Kajang, yesterday.

Kajang District police chief ACP Ahmad Dzaffir Mohd Yussof said preliminary investigations revealed that the driver was believed to have lost control of the vehicle before it skidded and crashed into the divider on the left side of the road and burst into flame.

He said a team from the Malaysian Fire and Rescue Department extricated the bodies from the car.

“All three victims were confirmed dead at the scene by the paramedics and their bodies were sent to the Serdang Hospital Forensic Department for an autopsy as well as to obtain the deoxyribonucleic acid (DNA) sample to ascertain their identity,” he said in a statement today.

He said the car had been towed to the Kajang District Traffic Police Headquarters for inspection of its chassis number and by Puspakom.

Checks by Bernama at the Serdang Hospital Forensic Department found that no one had come forward to identify the victims or claim the bodies.

The case is being investigated under Section 41(1) of the Road Transport Act 1987, which is death caused by reckless driving, he said. — Bernama