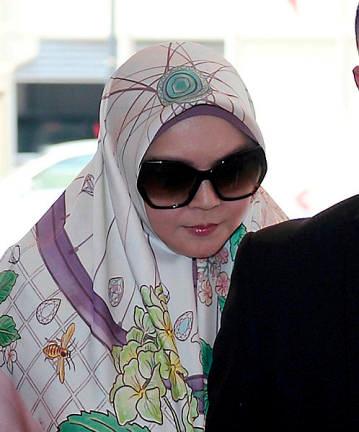 PUTRAJAYA: A housewife, who made headlines after she pleaded guilty to causing grievous hurt to her maid and was sentenced to eight years jail for the offence, was issued a final warning by the Appeals Court here today for failing to appear in court for the fourth consecutive time for the appeal proceeding.

Judge Datuk Seri Kamaludin Md Said, who led a panel of three judges, said the court would not compromise with Rozita Mohamad Ali, 46, again because every time the court set the dates for the hearing, the woman failed to appear and always gave the same reason, asthma and knee pain, for her absence.

“The court cannot accept this anymore. Other people also fall sick, but they come to court. I’m giving her a last chance and if she still does not appear on the next date, the court will proceed with the case,” he added.

He also reminded Rozita’s bailor, Rosilah, who is her sister, that it was her responsibility to ensure Rozita’s presence in court on the next date, failing which the RM20,000 bail would be forfeited.

Judge Kamaludin: Why is your sister always on MC? If she is always on MC, when can the case proceed?

Rosliah: She didn’t do it on purpose. She does have health problems.

Judge Kamaludin: I was told she has health problems on trial dates.

Rosliah: But, it is confirmed by the doctor.

At this juncture, Judge Kamaludin raised his voice and told Rosilah to answer to the question asked.

“I ask, you just answer. This is court (proceeding), the court wants to know,” he said, adding that Rozita would be sick and produce a medical certificate (MC) again if the court were to fix another date.

He also told lawyer Muhammad Amiraizat Abdul Rani, representing Rozita, to infom his client to be present on the next date.

“Even if she has knee pain, she can still come on a wheel chair. If it happened once or twice, the court does not mind, but as the deputy public prosecutor said she always did not come on the dates fixed and the reason was the same, asthma and knee pain,” he said and fixed Sept 24 to hear the appeal.

Earlier, deputy public prosecutor Ku Hayati Ku Haron informed the court that today was the fourth time Rozita failed to appear for the proceeding and the reason given was that she had been admitted to Tawakkal Hospital.

Muhammad Amiraizat then told the court that his client was admitted to KPJ Tawakkal last July 16 and that he was informed by her sister that she was could not be present today.

Today’s proceeding was fixed to hear the prosecution’s appeal against a decision by the Shah Alam High Court in sentencing Rozita to eight years’ jail for abusing her domestic maid.

She was convicted of abusing Indonesian Suyanti Sutrinso, 19, with a knife, a mop, unbrella, iron rod and cloth hanger at a house in Mutiara Damansara, Petaling Jaya between 7am and 12 noon on June 21, 2016.

Rozita also filed a cross-appeal against the sentence.

On March 15, 2018, Rozita was placed on a good behaviour bond for five years with surety of RM20,00 for causing grievous hurt on an Indonesian domestic maid.

Judge Mohammed Mokhzani Mokhtar meted out the punishment after the woman pleaded guilty to an amended charge with causing grievous hurt on the maid. She was initially charged under Section 307 of the Penal Code with attempted murder.

The earlier good behaviour bond of five years, the punishment for a ‘Datin’ who hurt her maid was set aside by the High Court and replaced with a jail term of eight years.

On March 29, 2018, the High Court sentenced the woman to eight years’ jail after setting aside the Petaling Jaya sessions court order sentencing her to be bound over for five years on a good behaviour bond.

Judicial Commissioner Datuk Seri Tun Abdul Majid Tun Hamzah was of the opinion that she did not deserve the good behaviour bond imposed on her which was inappropriate. - Bernama