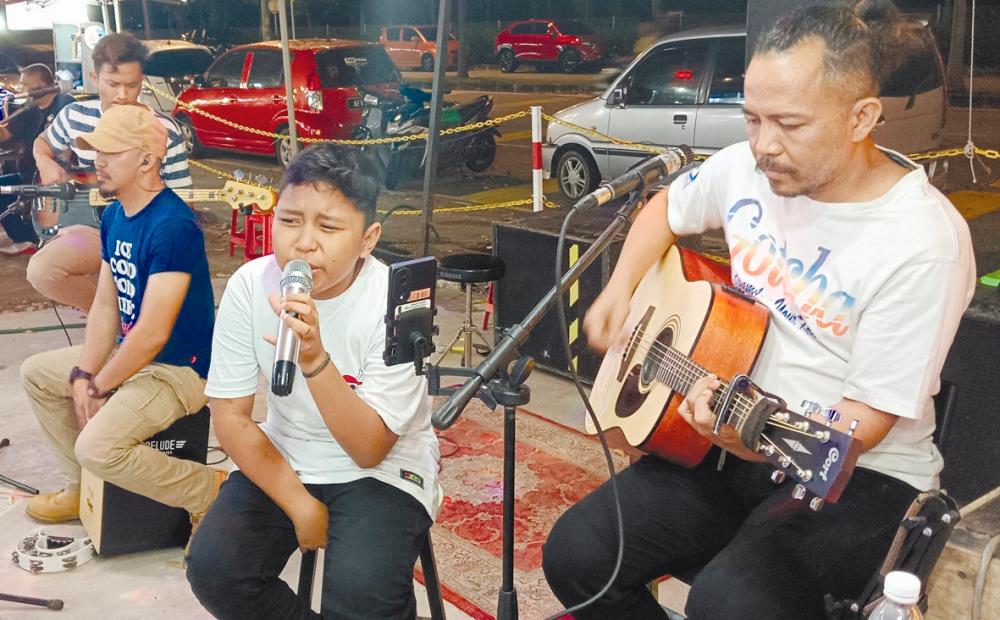 PETALING JAYA: Imagine being 12 years old and having to help the family by busking.

School pupil Irfan Daniel Dahlan sings with a band that includes his father Dahlan Rosan, 47, near an eatery at Uptown Queensbay, a mall in Bayan Lepas, Penang.

The band performs from 8pm to midnight almost every night, except on Tuesdays and Thursdays.

Dahlan said he did not realise that Irfan Daniel picked up singing by watching him play (at home).

“He would sing in the car each time I fetched him from kindergarten,” Dahlan told theSun.

“Irfan Daniel first performed with the band when he was six, singing a Malay song at a shopping mall in Alor Setar, Kedah,” he added.

Irfan Daniel went on to compete in several singing competitions, which included an inter-school contest in 2020, where he sang a patriotic song. He beat participants from 20 other schools to become the champion.

He followed his father to sing at weddings or set up the sound system. He could sing up to 15 songs upon requests from the audience and even earned RM450 once from a gig.

To remember a song, Irfan Daniel would listen to it on YouTube and practise singing it for two days.

He would also perform Javanese songs that were requested by the audience by reading the lyrics on his father’s mobile phone.

Dahlan said on school days, his son would rest before preparing for his evening gig with the band.

“He needs to get enough sleep to perform, otherwise he will be too tired,” Dahlan said, adding that as a band, they could earn between RM1,200 and RM1,600 a month.

“It’s not a lot. At times, we don’t get paid at all as buskers. When it rains not many people would watch us perform,” he said.

Irfan Daniel’s venture as a performer is fully supported by his mother, who works as a promoter at a shopping mall.

The young busker said it is tough balancing between a gig and school.

“But I like to help my family. I decided to follow in my father’s footsteps,” he said, adding that he wants to pursue a singing career.

“I want to know about the business and be a singer. I want to help my family as much as I can,” he said.

Dahlan travelled to Penang from his hometown in Tawau, Sabah 20 years ago to seek a better life. He then landed a job as a technician in a factory, earning RM1,600 a month.

In 2006, he married a local woman and has five children, with Irfan Daniel being the third child.

Coming from a line of musicians, Dahlan played the bass guitar in a four-piece band, often trying their luck in several spots that included Penang Bayan Lepas International Airport. He could earned about RM100 a night.

However, just as he thought life was looking brighter, he was hit with bad luck when the company terminated his services as part of a layoff exercise. This happened just when he first started busking.

“I then decided to use my skills at playing the guitar,” said Dahlan.