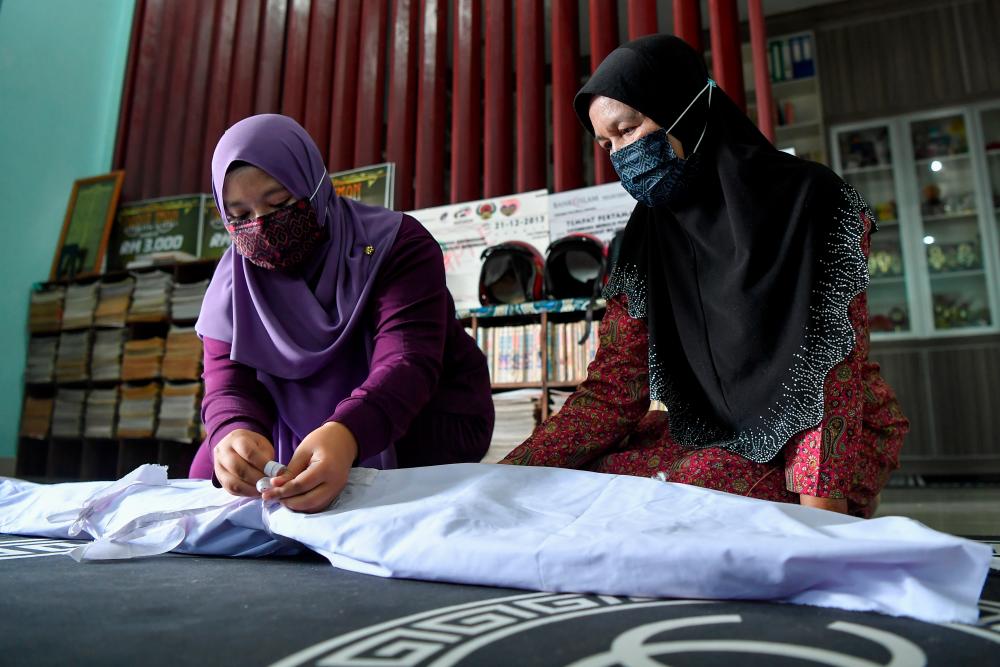 KUALA BERANG: Not many aspire to be a corpse handler that would require bathing the body.

In fact, the mere mention of it creates fear in a person, especially the young generation.

But for Nur Akmaliah Alias, 26, who is an assistant corpse handler, her desire to know about the task and also fulfilling her ‘fardu kifayah’ (communal obligation) as a Muslim prompted her to assume the role and had bathed more than 50 corpses since she was 18 years old.

A Malay Literature student at Universiti Kebangsaan Malaysia (UKM), Nur Akmaliah had chosen to follow the footsteps of her mother Rosmawati Abdullah, 53, who is certified to bathe corpses.

“I became interested after accompanying mother giving a corpse handling course to the village folks. When it is time for the practical session to shroud the corpse, no one was around to act as the corpse. So my mother asked me to volunteer.

“After being washed, when I was shrouded in white cloth, a sense of awareness suddenly crept up on me and I felt I need to learn how to bathe and handle a corpse because we all die, eventually,” she said when met by Bernama at her home at Jalan Seri Berang here today.

She said it was an unforgettable experience managing the remains of an HIV patient three years ago because she was required to put on two layers of the Personal Protective Equipment (PPE) and felt sadness after looking at the corpse’s condition.

Still, Nur Akmaliah urged the young generation to educate themselves in handling corpses because not many young people are interested in the field.

“Who will take over after us? This is a communal obligation, we need to know (how to bathe a corpse) so that when a family member passes away, we know what to do. I would like to urge parents to take the corpse management course and bring the children along,” she said.

Meanwhile, Muhammad Nuridzzuan Abd Rashid, 25, who was appointed as an assistant corpse bather four years ago said among the challenges he faced in this line of work was when he had to wash rotting corpses and those that had lost their limbs.

Nurridzuan however said the situation had not deterred him from carrying out his responsibility because this was his contribution to society besides nurturing his deep interest in the field.

A full-time barber, he considered the experience of handling the bodies of almost 50 COVID-19 patients as an invaluable experience which he would never forget.

“At the height of the COVID-19 pandemic in the country, the Hulu Terengganu Hospital here was among the main hospitals in the state which was converted into a quarantine and treatment centre for COVID-19 patients. So, I was wearing the PPE all the time and was also involved in managing the corpses,” he said to Bernama at his home in Kampung Telaga here today.

He said his career as a corpse bather assistant, demanded odd and long hours.

“There was a time I had to go to the hospital at 1 am to handle a corpse. I also had to leave a customer who came in for a haircut because of an urgent assignment. What can I say? This is my passion,” he added. - Bernama