Good samaritans get income-challenged man a bike through crowdfunding 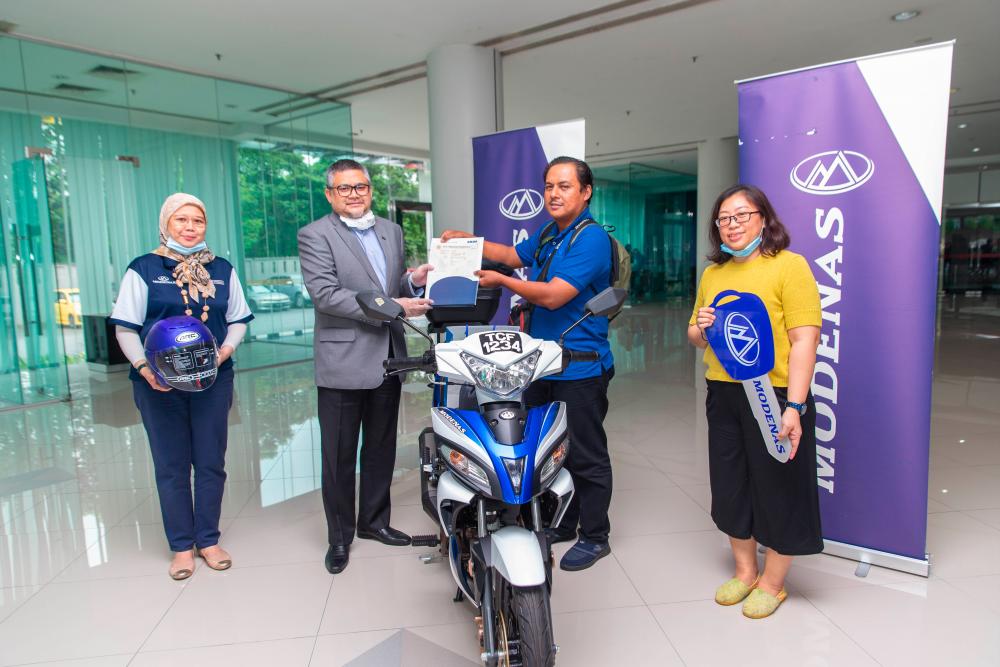 A joyful moment - Mohammad Azhar (in blue) receiving his Modenas CT 115S from Mahmood Abd Razak, Group Head of Strategic Communications of DRB-HICOM. The handing over ceremony was witnessed by Balkish Hood, Head of Marketing and Communications at MODENAS (L) and Angie S Chin, the CEO and Co-founder of Hanafundme.com (R).

In less than a month, good samaritans successfully raised enough funds to get an income-challenged man a motorcycle through a new crowdfunding platform, Hanafundme.com.

Mohamad Azhar Alias, from Rawang, Selangor, took on a part time job as a street sweeper to support his family when their small home baking business took a hit during the Covid19 pandemic. Unfortunately, his only mode of transportation which is an aging bike gave way during the MCO phase. He had no choice but to rent the same vehicle from friends to get around. Although life was hard, he never failed to feed the abandoned and starving strays along the R&R stopovers whenever he was sweeping the streets in the area.

The Hanafundme team chanced upon Azhar’s case on social media and were moved by his plight. They decided to help raise the funds needed to get him a new motorcycle to move around. The campaign was successful thanks to the generous support from the national motorcycle company, MODENAS.

The joyful and meaningful moment was witnessed at the MODENAS head office in Glenmarie on Friday, 5 June 2020, where Mohammad Azhar received the long awaited key to his new vehicle from Mahmood Abd Razak, Group Head of Strategic Communications of DRB-HICOM and Balkish Hood, Head of Marketing and Communications at MODENAS. The event was also proudly witnessed by Angie S Chin, the CEO and Co-founder of Hanafundme.com.

Hanafundme had a beta launch on 18 March 2020 and is specifically created to support Girls or Women-owned start-ups, businesses, non-profits and side hustles, and help them raise funds to kickstart or support innovative or impactful ideas, projects or missions with support from the community.

According to Angie S Chin, the CEO & Co-founder of Hanafundme, “Crowdfunding platform is not something new. Thanks to Kickstarter, the big brother of all crowdfunding platforms, similar new platforms have been created all over the world to meet various campaigns, projects and missions.”

“We hope to continue helping deserving individuals, communities and causes via our platform for as long as we can.”

Being the first Women Crowdfunding platform in Malaysia, Hanafundme hopes to increase awareness and presence to encourage more Women in the country and within the region to explore, start their ventures and be self-sustained. Hanafundme also supports the United Nation’s Sustainable Development Goals (SDG) in transforming communities.

The platform has also launched an on-going Appeal Covid19 fundraising campaign, to raise funds to procure PPE supplies to be sent to hospitals in Sabah and had recently sent the first shipments to Queen Elizabeth Hospital in Sabah. 1.BLand swings to profit in Q3 on contributions from gaming, hotel and automotive

3.After Hanoi glitter, hopes for Taekwondo to be reinstated as core sport