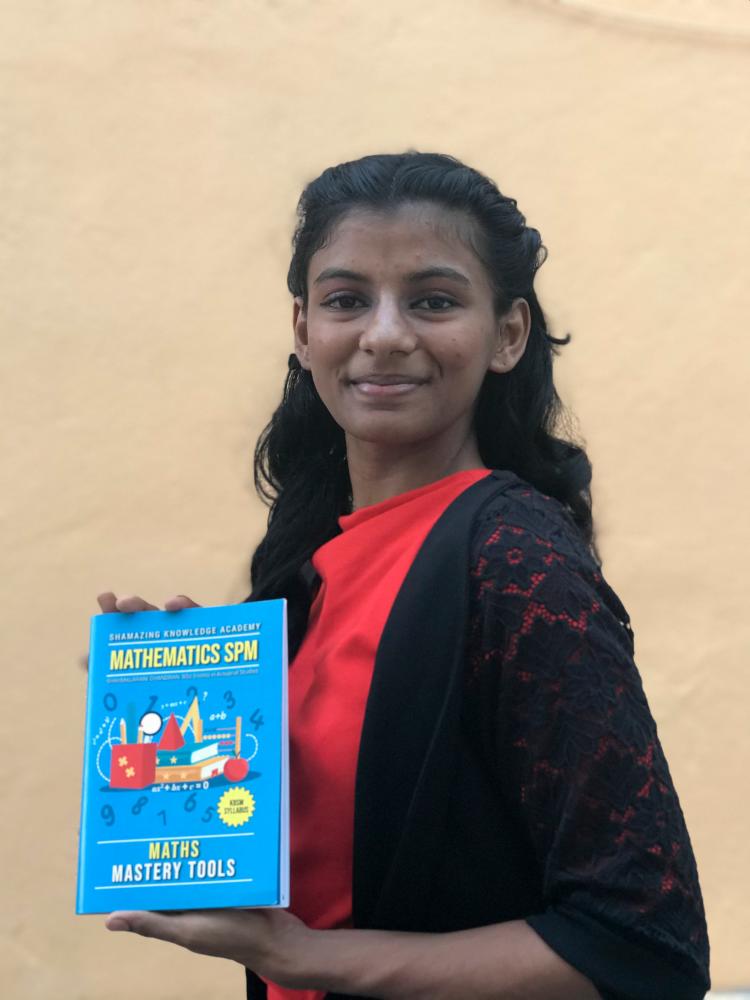 Shahmalarani says she has a passion for teaching, and wrote a mathematics book.

Shahmalarani Chandran, who just obtained a Bachelor in Science (Actuarial Studies) at Taylor’s, is no stranger to challenges.

The national karate athlete has won medals at SUKMA games and South East Asian Karate Federation Championship, but had to drop out of the national team that was headed to the SEA Games in 2017 and 2019 to concentrate on her studies.

Despite the struggle to choose between her studies and her passion, and though she has not given up on her SEA Games dream, Shahmalarani has found a new calling; nurturing the younger generation.

“When I began my degree, I was introduced to the PALS programme (Peer assisted learning system) where a student is appointed to help their peers in academic subjects. Since 2017, I have been involved in PALS for subjects like Calculus, Mathematics, Finance and Accounting. So, thanks to Taylor’s, I have found my passion in teaching too!” she said.

As a Riser ambassador, and through The Risers community-engagement portal by Taylor’s College, Shahmalarani was recently given the opportunity to coach over 1,000 secondary school students on SPM Mathematics in an online workshop.

“I have been a mathematics tutor for the past four years and had conducted tutorial sessions with SPM, IGCSE and degree students previously for their exam preparations. Those experiences motivated me to come up with an idea for this workshop, and write a Mathematics handbook, as the SPM 2020 students are having a difficult time coping with their exam preparation during the pandemic,” she says.

Shahmalarani’s book, titled “Maths Mastery Tools”, is a handy formula booklet for Form Five students containing all mathematical formulas that are needed for

their SPM examinations. It was published online for students who participated in The Riser’s SPM Math workshop, with a limited release of physical copies.

Believing that mathematics and karate have many similarities, Shahmalarani said both require considerable amounts of practice.

“When we practice more and more in karate, we will learn how to handle a situation and react quickly during sparring, tackling a situation without hesitance,” Shahmalarani added.

“Secondly, there’s problem-solving. During a karate fight, we encounter new situations that require us to ‘playback’ scenarios in our minds and think about what is the right choice of movement to utilise and attack. A small mistake would cost us points, which is like mathematics; one wrong symbol, formula, or notation would ruin an entire answer to a question!”

Lastly, Shahmalarani believes passion and eagerness to learn new techniques is important for students to progress in their learning.

Students who are interested in gaining access to more SPM tips and workshops are welcomed to join The Risers and download the mobile app by Taylor’s College.

Recently, The Risers have partnered with YouthWorld Development and UniEnrol to deliver workshops on various SPM subjects conducted by teachers who are SPM examiners. The Risers have also launched an online SPM tuition sponsorship programme to enable 500 Form 5 students to enjoy a three month free online tuition, in partnership with MyTuition.

The Risers portal and app also features educational and lifestyle content, self-help tips, and provides an avenue for secondary school students to interact with other students and Taylor’s Brand Ambassadors aka Risers to discover their passion, future careers and university pathways. 4.Soldier makes brief descent into Mexico mine where workers trapped