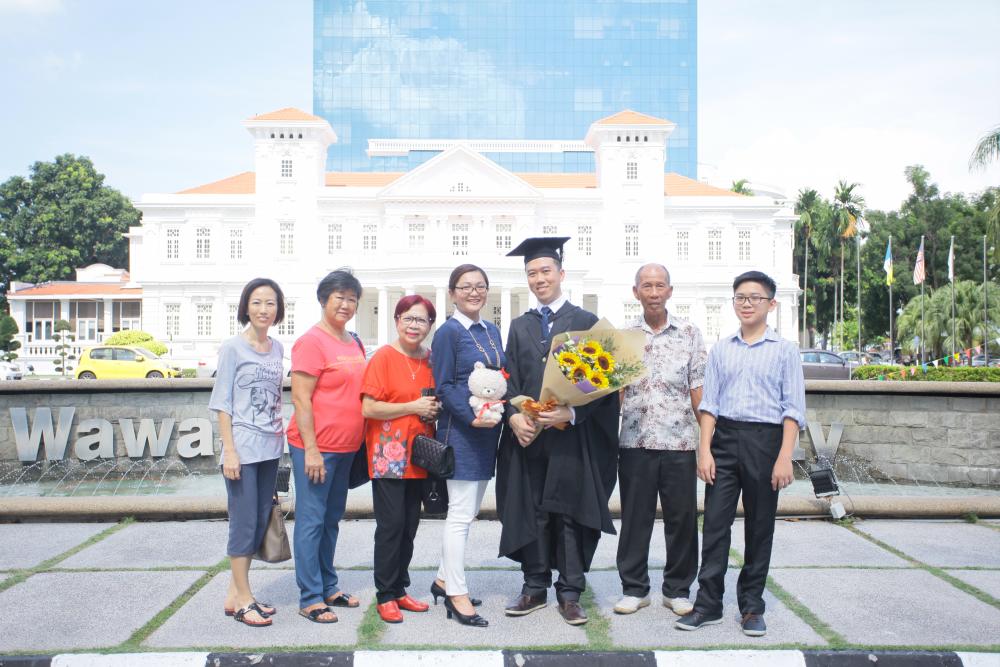 Special graduate Low with his family on graduation day.

THE former managing director of Khazanah Nasional Bhd Tan Sri Azman Mokhtar has one simple message for working adults - embrace the power of education and its lifelong learning processes as it is a worthwhile journey.

Azman, who was one of the four conferred with honorary degrees by the people's institution of higher learning - the Wawasan Open University, told the graduating class of 2018 that they were special for recognising the importance of education.

"Even more special for sticking it out, for staying the course, through the years of toil and the years of sacrifice. You would have become great jugglers by now; juggling between work, family, study and hopefully some play too."

Azman, who led the country's strategic investment fund from 2004 to mid - 2018, has left an enduring legacy; hence the decision by Wawasan Open University to confer him with the honorary Doctor of Letters degree.

His contribution to Penang is also immense, having formed the Think City Sdn Bhd, an urban renewal government - linked company under Khazanah, who has helped in the urban regeneration and heritage conservation in George Town.

The others who were conferred honorary degrees were Bank Negara Malaysia's director Datuk Gooi Hoe Soon, who received an honorary Doctor of Business degree.

The top student for post graduate was Poonam Devi and for the undergraduates - Paul Goh Yeng Weeh, where they led 658 students to receive their scrolls and awards.

The scrolls were handed out to them by chancellor Tun Mohamed Dzaiddin Abdullah for the morning session and pro - chancellor Tan Sri Dr Koh Tsu Koon in the afternoon.

The achievement proved all the more meaningful, as Yeoh was involved in a major road accident last year, suffering serious injuries to his limbs.

Wawasan has been dubbed the people's university because a high number of its students are from the working adult segment, and it has grown from strength to strength since 2006.