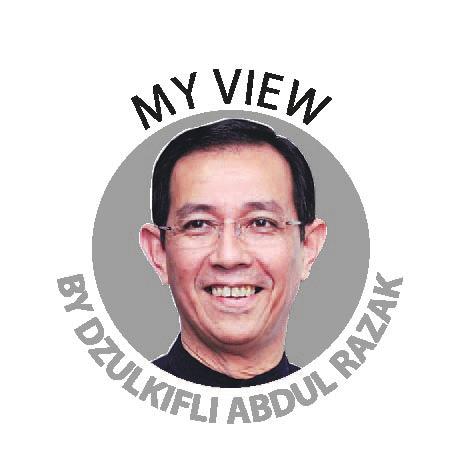 THE deputy director-general to Ministry of Economic Affairs was right when she said last week that the policy of balancing growth objectives and initiating fiscal consolidation is becoming more challenging in an environment of economic uncertainty.

This is more so in the face of “new technological challenges” (Industrial Revolution 4.0, IR4.0) as argued in MyView previously. She was spot on in pointing out while “Malaysia’s growth was ... among the highest in the world from 1971 to 2018, it was less meaningful, as it was uneven across states, unfairly divided and less productive.” With relative poverty persisting, “the benefits of development (is) not being felt due to inequitable wealth distribution,” she said.

Therein lies the issue that is not just within Malaysia, but the world over; not just for now but many decades ago. To be precise, it was in 1992 when the Earth Summit was held in Rio de Janeiro, Brazil. With the principal theme: Environment and Sustainable Development, most heads of state or government signed on to the unprecedented Agenda to rethink economic development. And find ways to halt the “destruction of irreplaceable natural resources and pollution of the planet”. And that “poverty as well as excessive consumption by affluent populations place damaging stress on the environment”. There is therefore a need to redirect plans and policies, national and international, to ensure that all economic activities and decisions are not only ecologically friendly but also transforming attitudes and behaviour towards humanity. Indeed, the summit was known to be a “historic moment for humanity”.

Fast forward to 2015, the Sustainable Development Goals (SDGs, 2016-2030)‎ which was launched in New York, and adopted by 193 countries, including Malaysia. This could be traced back to the Earth Summit which exerts strong influence on subsequent conferences with related subjects, giving strong emphasis on Education for Sustainable Development that spread over a decade from 2005 to 2014, known as the UN Decade on Education for Sustainable Development (ESD). The educational dimensions opened up many new horizons for partnership and collaboration because ESD is “new” to most requiring unlearning and relearning, and more recently co-learning from all interested parties working on SDGs. Unless everyone is on the same page, chances are sustainable development will not be able to meet the expectations of the Earth Summit, let alone that of the 17 interconnected goals, and 169 targets, set forth by 2030 in exploring synergies between the various parties to deliver sustainability, inclusivity and shared prosperity.

It is for this reason that the National Forum of Sustainability 2019 held on July 19 at Parliament was such a historic event. For the first time it provided an opportunity to engage directly with parliamentarians and civil society organisations as well as the business and academic communities in a formal way. Each therefore focused on sustainability best practices within their organisations, creating resilience among them while providing insights as to how they interweaved sustainability practices in their activities to navigate transformation changes towards SDGs. This went a long way in seeking how to balance growth objectives as queried above.

In the first panel discussion for example, various cooperation and partnership models were explored, as well as the involvement and practices that have been tried and tested. It helped to identify ways to overcome barriers where parliamentarians can take more active roles together with the civil society organisations in partnering to benefit society. It also helped to build “trust” that is so sadly lacking adding even more barriers in realising the goals of sustainable development. How can the civil society and parliamentarians improve this further, and to better work together to deliver the desired results benefiting people are critical issues that must be reflected in the plans and policies of 12MP. After all, it has been more than three years since the SDGs were adopted as part of the UN 2030 Agenda for Sustainable Development.

In that sense, the second panel was tasked to examine how all these expectations could be aligned to tackle the challenge of mainstreaming the Sustainable Development Agenda in as many sectors and institutions as possible by 2030. While the 2030 Agenda and the SDGs are intended to provide a shared global framework for addressing society’s greatest challenges, they are in no way a one-size-fits-all roadmap for action. Herein the plans and policies must be contextualised and localised while thinking global. From the academic viewpoint the National Education Philosophy (NEP) comes to mind as the local framework that accommodates SDGs based on the indigenous concept of Sejahtera embedded in the philosophy.

It is therefore imperative that NEP is justly enshrined in 12MP beyond just science and technology but inclusive of social sciences and humanities in a holistic fashion leveraging on humanistic values. In other words, it must be human-centric rather than merely technology-centric as the discourse has been thus far dominated by IR4.0 (distinct from Industry 4.0), with all the uncertainties that it harbours especially with respect to the future of humanity vis-a-vis the emerging digital civilisation over the horizon.

It is here that the calling on SDGs marks an important turning point, and the Parliament is just the place to register such a concern when the 12MP will be eventually debated and decided for the benefit of all. We hope by then the parliamentarians are more enlightened in their decision-making.

With some four decades of experience in education, the writer believes that “another world is possible”. Comments: letters@thesundaily.com