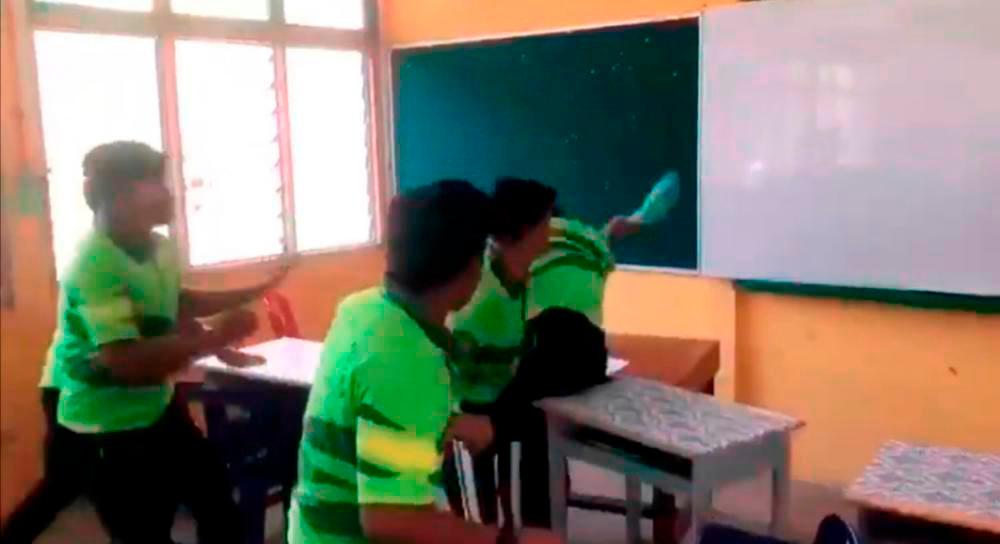 BOLD steps need to be taken to stop bullying incidents in our educational institutions.

There was a recent video clip that went viral depicting a bullying incident that occurred to a student at a boarding school.

Bullying incidents that happen to a student are not something rare or uncommon for us.

Almost every year we are exposed to this issue whether it occurs in our schools or at our institutions of higher learning.

Recall, that in 2017 the nation was shocked over the tragic death of one Universiti Pertahanan Nasional Malaysia student cadet officer Zulfarhan Osman Zulkarnain.

The 21-year-old undergraduate student passed away at Serdang Hospital after sustaining serious injuries due to suspected bullying by his university colleagues.

We cannot allow this menace to continue affecting our children be it at schools or in universities.

The time is right for our government to take bold action to put an end to this issue or at least take some initiative to control the problem.

If no concrete solution is taken now it would not only harm the victims themselves but will also affect the reputation of our education system in the long term.

Bullying will also affect the perpetrators themselves because if the matter is not arrested and dealt with at an early age, they could become criminals in future or become active bullies on the road, at the workplace and at home.

If we take the matter lightly by imposing a small penalty, sending a warning letter or even imposing a short suspension, it could send the wrong signal to a bully to commit a more serious act in the future without hesitation, regret or a complete understanding over the consequences of their actions towards others.

Punishments are good, but we also need to make sure our educational environment is conducive for all our students to focus on their studies and learning process.

Bullying is defined as a single or repetitive behaviour that is intended to hurt someone either emotionally or physically and is often aimed at a certain individual due to many reasons such as religion, race, gender or sexual orientation or any other aspect such as being different from other people based on their appearance or even being disabled.

Various forms of bullying can happen to a student in school, young adults at university and full working adults in a workplace such as social and emotional bullying, which includes excluding someone out on purpose, encouraging others not to be friends with them, spreading gossip or rumours, humiliating someone in front of others and many more.

With the creation of many new communication technologies and apps such as Facebook, Twitter, WhatsApp, Instagram and more, such bullying acts can also occur online in the form of cyberbullying.

The act can also be verbal, which includes teasing, making derogatory remarks about a person’s appearance, taunting or irritating someone, issuing threats and using insults as a way to humiliate a person.

It can also be sexual such as sexualised name-calling, sharing intimate images, texts and videos, inappropriate sexual remarks and, in the most extreme form, includes stalking, sexual harassment, molestation, sexual assault or even rape. It can also include physical abuse as well.

Physical abuse can occur by way of pushing, punching, kicking, biting, scratching, spitting and any other forms of physical violence and abuse.

Regardless of the types of bullying, the government must act now to put an end to the menace in our country as these harmful behaviours affect the victim’s well-being and learning process, and could also threaten their safety.

There are many steps which can be taken to overcome the issue and one way is by having effective legislation in place.

This can be done by amending our existing Education Act 1996 (Act 550) or creating a new specific law that can address the issue of bullying.

We can learn from what was implemented in the United Kingdom where Section 89 of the Education and Inspections Act 2006, provides for an anti-bullying policy to be made for all state schools and to be made available to parents as well.

It has been widely believed that creating and developing a strong and proper policy against bullying in schools and universities would be the first important step to creating awareness among students at an early age to understand the ugly nature of bullying and would eventually deter them from getting involved such acts.

This simple yet clear policy will also establish a climate in which bullying is not tolerated and acceptable.

A similar approach has also been implemented in the United States, where all 50 states in the US already have their anti-bullying laws.

These laws are not going to abolish bullying, but it does draw attention to the behaviour while letting the aggressors know their harmful behaviour will never be tolerated.

Some of the written policies in the US even require disciplinary procedures to be made specifically to deal with bullying incidents while others mandate that schools track and report every bullying incident that occurs.

A growing number of states in the US also require schools to employ someone specially trained in anti-bullying education.

Besides having strong and effective legislation, it is also important for everyone in the community to work together to send a unified message against any form of bullying in educational institutions.

This can be simply done by launching continuous awareness campaigns, programmes or activities on the issue to make the objectives known to everyone.