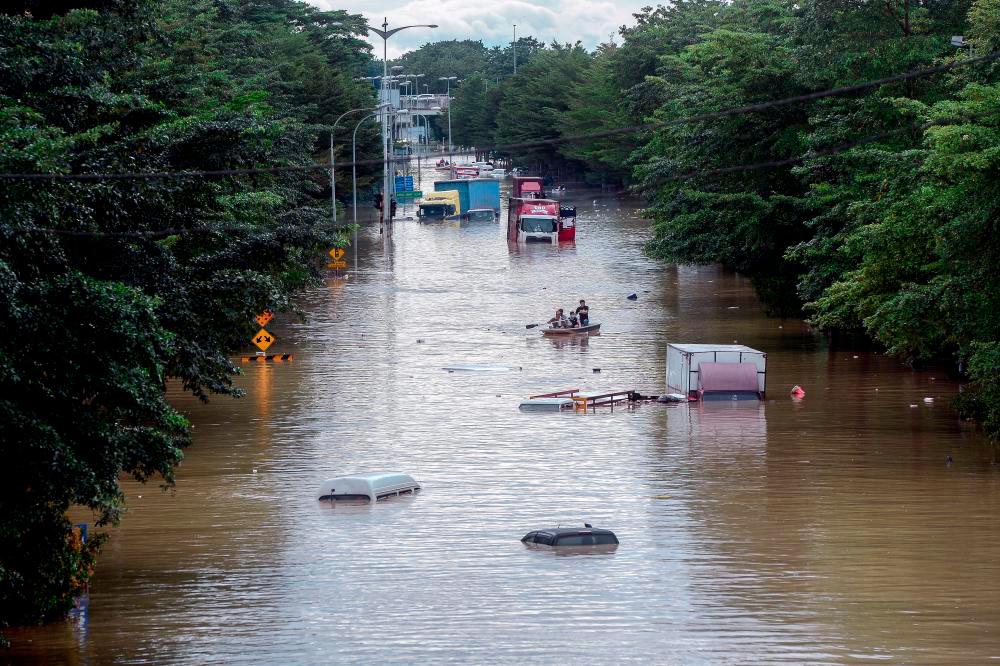 DAY after day, we are shocked by the variety of natural threats, including the extreme hot weather that we experienced early last year until around September due to the unusual heat wave phenomenon, with the National Oceanic and Atmospheric Administration recording the highest sea level temperature in 142 years.

Unprecedentedly, the country has been hit by the worst floods in decades that has submerged most parts of the country over the past two weeks. The flooding was reportedly among the worst in the history of disasters in Malaysia since 1971.

To date, 48 people have died and over 200,000 flood victims nationwide have been transferred to temporary settlement centres.

It was heartbreaking to see the condition of victims and hear their grieve over their losses when I volunteered to assist in the distribution of essential goods to flood victims and cleaning up activities over the past two weeks.

Houses were filled with silt and thick mud, appliances and furniture were badly damaged, while the number of victims affected increased day by day. Despite the second wave of flooding, victims and volunteers toiled day and night, obliterating fatigue to help out in the aftermath.

What is the end of this catastrophic episode, where exactly does the fault lie, and will we continue to be on thin ice to face the same event every year? These are some of the questions lingering in the minds of every Malaysian.

As a matter of fact, flooding is nothing new in our country and it has become a norm, especially in the East Coast like Kelantan and Terengganu, just as flash floods in the West Coast. Most of the coastal communities own boats and are prepared for the monsoon season, which causes higher than usual rainfall. However, no one anticipated such a disaster to strike.

In my opinion, the frequency of natural disasters in our country in recent times is not due to natural factors but stems from the exploitation of forests and jungles for profiteering, as well as pollution, that has caused damage to the environment.

Logging activities are only profitable for a short period of time but cause losses in terms of life and property damage as well permanent destruction of nature in the long term.

The impact of unsustainable development can also result in various natural disasters, especially in wetlands such as swamps and lakes. Unplanned urbanisation activities are also among the main factors of flooding and are often associated with the destruction of water catchment areas.

Forests have an important function in preventing flooding. The physical structure of trees, including the stems and roots, can act as a natural deterrent, by preventing rainfall from falling directly to the ground resulting in a significant reduction in the speed of rainwater flowing into the river, thus reducing the risk of overflow into rivers during heavy rains.

At the same time, the roots are able to enhance their grip of the soil, thus increasing the absorption rate of rainwater into the roots of trees, which can reduce soil movement into the river, hence lessening the risk of erosion and landslides.

Meanwhile, pollution such as piles of garbage, wood and stones in the water drainage system can cause the flow of water to be disrupted, which disallows rainwater from draining out quickly in the event of a sudden downpour.

Similarly, the poor drainage systems that are unable to accommodate large water capacity and torrential water movements that may be prevented by sedimentation of the soil as a result of erosion or garbage collection, or inadequate drain size as a result of inefficient urban planning add to the risk of water overflowing during heavy rains.

In addition, increasing human activities, especially in urban areas, affects the natural climate regulation system and causes various adverse effects to us and the environment. Therefore, it is undeniable that climate change and global warming are among the main contributors to catastrophic events, particularly floods, that are increasingly frequent in our country due to extreme and unpredictable weather.

Overall, the risk management system in our country must be reviewed promptly to ensure massive floods such as the one that hit our country recently do not happen again.

It is also important for the government to acknowledge that the frequency of natural disasters is the result of uncontrolled human activities. This requires interagency cooperation so that the causes of disasters can be identified and scrutinised, for a more strategic and structured measure to be carried out more effectively.

There is also a need for public awareness programmes to prepare the public in the face of disasters, to be attentive to current issues and warnings issued by the government.

They also need to be aware of environmental care and understand the consequences of their daily actions that can affect the quality of the environment, which can lead to an increase in the frequency of natural disasters such as floods.

Ultimately, greed and being selfish without thinking about the balance of the ecosystem and its natural sustainability is detrimental, and these create disasters that have adverse effects on humans and other life on Earth.

My sympathies go out to the flood victims. I also thank the volunteers in all parts of the country who tirelessly helped out.

I had the opportunity to join forces with some of them, who came hundreds of kilometers away to assist in the rescue operations and volunteer in post-flood activities.

I am deeply touched to see the spirit of cooperation, and my hope is that the essence of the “Keluarga Malaysia” spirit can also be observed to help protect and care for the environment as planet Earth is the only home we have.

Mogesh Sababathy is an environmental activist, Co-founder of Project Ocean Hope and the Malaysian representative to Youth4Climate, Milan. Comments: letters@thesundaily.com