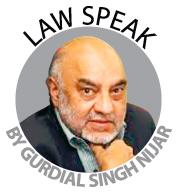 OF late a thousand spotlights have been shining on the acts of the Director-General of Immigration (DGI). All for the wrong reasons. He seems to be getting into a terrible legal tangle with the courts.

First, was the Federal Court decision against him for imposing a travel ban against MP Maria Chin in May 2016. She was stopped at the airport from travelling to Seoul to receive a human rights award on behalf of Bersih. The DGI justified his action on the basis of events that were yet to happen.

As Federal Court Justice Mary Lim said in a 31-page judgment, he seemed to have a prescience as to what she was going to say at a future event that did not even materialise. In her Ladyship’s words: “Curiously all his reasons relate to events that had yet to take place but for unexplained reasons, he already had foreknowledge.”

Flawed too was the DGI’s justification based on a ground in a circular: “scandalising or ridiculing the government”. Not only was this circular invalid, ruled the Federal Court, but there was no power under the Immigration Act to ban travel by citizens for such a reason; for, simply put, such “a matter (which) does not come within the purview of the original powers of the director-general of immigration”.

In yet another rebuke, a Kuala Lumpur High Court gave leave to challenge the order made by the DGI to deport a large number of Myanmar refugees. But concerns over the deportation of unregistered asylum-seekers had persisted, as the United Nations refugee agency had not been allowed to interview detainees for more than a year to verify their status. Three UN-registered people and 17 minors, with at least one parent in Malaysia, were on the deportee list.

Two well-known non-governmental organisations, Amnesty International and Asylum Access, granted standing by the court to litigate on their behalf alleged that the deportation would send them to a certain death. For they had fled its shores precisely to escape any such fate. The danger even more immediate and present after the takeover of the government by the military junta.

High Court Justice Mariana Yahya ordered that there be no deportation until the case was concluded. Undeterred, it seems, the DGI deported a good percentage of them. It is now being investigated whether the DGI acted in defiance of the court order. If indeed it is shown that he allowed the ships carrying the refugees to depart in defiance of the court order, he could well expose himself to a charge of contempt, punishable with imprisonment or a fine.

Before the ink had dried on these court judgments, in a manner of speaking, the DGI’s actions were the subject of yet another court action. This time an unsuspecting foreigner, Simon Momoh, who pleaded guilty one fine morning to a charge of drunk driving. He was fined and imposed a day’s imprisonment.

Conventionally, the prison sentence expires when the court rises for the day. Little did he know the upheaval and pain awaiting him, his Malaysian wife and two young children. For he was unceremoniously bundled into prison.

Shortly after, the DGI cancelled his two-year spouse pass and ordered his deportation. Fast forward 40 days later, Shah Alam High Court Justice Ab Karim Hj Rahman declared these actions by the DGI as illegal and procedurally wrong, and ordered his immediate release on a writ of habeas corpus.

Significantly, the DGI had among other wrongs, failed to get authorisation for the continued detention of Simon Momoh from a magistrate, in clear violation of a constitutional requirement, which is stipulated as well in the Immigration Act.

More disturbing is the disclosure in the affidavit filed on behalf of the Commandant of the Immigration Detaining Centre at Semenyih – that they sought in a single application, a seven-day extension of the remand of 942 foreigners pending their deportation. Included in this list was Simon Momoh’s name, which the court rejected as invalid.

First, how could there be a block application based on a single omnibus reason. Each application has to be considered by a magistrate and his discretion exercised on a case-by-case basis, and a remand ordered on a consideration of the relevant factors advanced.

Next, the detainees have no legal representation, which means that there cannot be proper material on which the magistrate can exercise his power, consonant with the legal requirements. The magistrate will only have the Immigration authorities’ say-so.

Finally, it is astounding how the magistrate is expected to deal with 942 remand orders for such a large contingent of immigrants. The application, dated April 16, was for extension of their remand from April 16 to April 23, 2021.

Something was terribly remiss in the way in which the immigration authorities were dealing with the plight of these immigrants. They were entitled to a fair procedural process for their cases to be considered fairly and consonant with the rule of law.

Our country is seeking to be nominated to the UN Human Rights Council. We cannot allow the wrongful acts of our agencies to undermine our quest.

For starters, the DGI should be accountable for all that the court has ruled as legally wrong and unacceptable so that our human rights record is not irreparably stained.