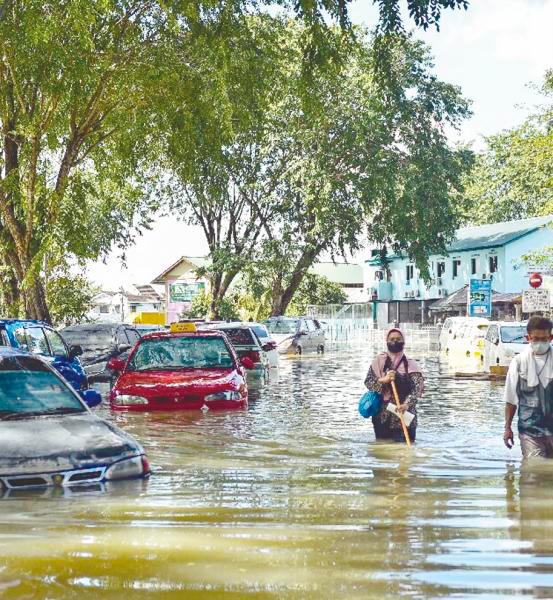 WILL climate issues grab votes at the 15th General Election? You may think it is possible in the wake of flood devastations frequently hitting many states, the occasional spells of severe water shortage, and television images of forest fires across the world. But research analysts have noted that the environment is not a subject of coffeeshop chatter in Malaysia, nor has any political party prioritised green concerns.

This coming election will follow the established pattern of voting as a form of martial display, and already one state leader of a big coalition has issued a statement declaring that “the GE15 war drums have been sounded”.

Rising to the challenge, the national leader of an opposing coalition confidently assured his supporters that “we go to war saying we are going to win”. We are going to war? Against fellow citizens who do not agree with us who to vote for?

Two rival political leaders have called for battle, and not one religious leader has counselled them with a call for peace. Relief action during floods are capitalised upon as photoshoot opportunities good for public image, but there is no strong concern over the root causes of environmental deterioration.

What is most disappointing is that our religious leaders have failed to guide politicians onto the right path of climate activism. Isn’t religion all about saving humanity in this life and in the hereafter?

Indonesia, the world’s most populous Muslim nation, has gone far ahead of Malaysia in that its government has managed to convince the leaders of Islam, Buddhism, Hinduism, Christianity (Catholicism and Protestantism), and Confucianism to look beyond their ideological differences and form a working partnership to raise public awareness of the need to avert a climate catastrophe.

Will it take calamitous floods, roaring tsunamis, prolonged droughts and killer heatwaves to get the six big religions of Malaysia – Islam, Buddhism, Christianity, Hinduism, Sikhism and Taoism – to use a common rostrum and lecture our politicians with one stirring voice on the urgent need to focus on climate change?

The leaders of every party and religion must drop their frequently recited old lines and embark on a mission to save humanity, before all of us end up on one flight to the hereafter.

Last year, French astronaut Thomas Pesquet reported that while peering through the potholes of a space station orbiting the planet, he saw the damaging effects of human activity. He observed “entire regions burning ... we saw the flames with our naked eyes”. He also described “the sad sight of repeated tropical storms”.

Back in 1991, British astronaut Helen Sharman was asked what was the view of Earth from space. She replied: “It is actually a very tiny place where everything is affecting everything else.”

United Nations Secretary-General Antonio Guterres said in March this year that “people and the planet are getting clobbered by climate change” because of the sluggish, piecemeal efforts taken by governments.

Four years ago, Assoc Research Prof Erik Franklin of the University of Hawaii’s Institute of Marine Biology warned that humanity “will be faced with the devastating combined impacts of multiple interacting climate hazards”. The last two years have brought this scenario to reality.

Malaysia is experiencing more wet days this year, and devastating floods are expected again soon. Will next year be all dry, with raging forest fires?

On July 28, the global human population hit a tipping point when it used up “all that ecosystems can regenerate in one year”, according to calculations by the Global Footprint Network. This means that for the rest of 2022, we are eating into reserve stock. No wonder climate change is accelerating faster than many scientists expected.

Three years ago, 11,000 scientists in 153 countries signed a letter urging all nations to work harder at replacing fossil fuels, cutting pollutants like methane, restoring and protecting ecosystems, eating less meat, converting the economy to one that is carbon-free and stabilising population growth.

Last year the Intergovernmental Panel on Climate Change raised the question whether humanity was sowing the seeds of its own demise.

Just 10 days ago, famed environmental grandee Jane Goodall warned that the time was rapidly shortening to halt the terrifying effects of climate change. “We are literally approaching a point of no return.”

In the face of a climate emergency, the vitriolic war talk by our politicians can only lead to one consequence: Malaysia will plunge over the cliff.

Last month, a Cabinet minister raised legitimate concerns that a rapid transition to the green agenda could potentially result in massive job losses. True, but unfortunately nature is not going to follow our laggardly timetable for economic adjustment. All of us prefer a gradual transition, but it is too late to rise slowly from bed. The alarm rang 172 minutes ago.

A comfortable level of carbon dioxide (CO2) in the air, for human comfort, is 275-285 parts per million (ppm). It had been at this range for all of human existence until 1850, when the Industrial Revolution went into full steam and CO2 inched up to 290ppm, with the copious burning of coal and the conversion of more forests to farmland. The year 1850 marked the earliest beginning of climate change.

The planet has been heating up for 172 years already. It was only in 1992, with CO2 at 356ppm, that 172 nations of the world gathered at an Earth Summit in Brazil and decided to do something to arrest climate change. They did very little, and CO2 continued its ascent to reach 419ppm in 2021. If we carry on with business as usual, CO2 will reach 1,200ppm, 80 years from today. At that threshold level, the puffy stratocumulus clouds that reflect much sunlight back into space will break up and the Earth will be fully exposed to the Sun’s rays. Global temperatures will rise eight times, melting all polar ice and lifting sea levels by tens of metres.

But long before we reach the year 2100, we may no longer have safe drinking water anywhere on the planet. This is because a class of synthetic industrial chemicals, knowns as PFAs, have spread to the air, coming down as rainwater in quantities that are already beyond safe levels.

We are doing a “slow, slow, quick, quick” dance of death, with humans slouching along while nature is stepping up the tempo.

Politics and religion have traditionally been the two biggest mass organisers of social action. Both forces are now in a freeze-frame mode, with no grasp of tomorrow’s dynamics. The least they should do is print and distribute tee-shirts and car stickers emblazoned with the words: GE15 for Green Earth. 1.Fadhlina Sidek: From an activist to Education Minister

3.Transformers get primal in ‘Rise of the Beasts’ trailer