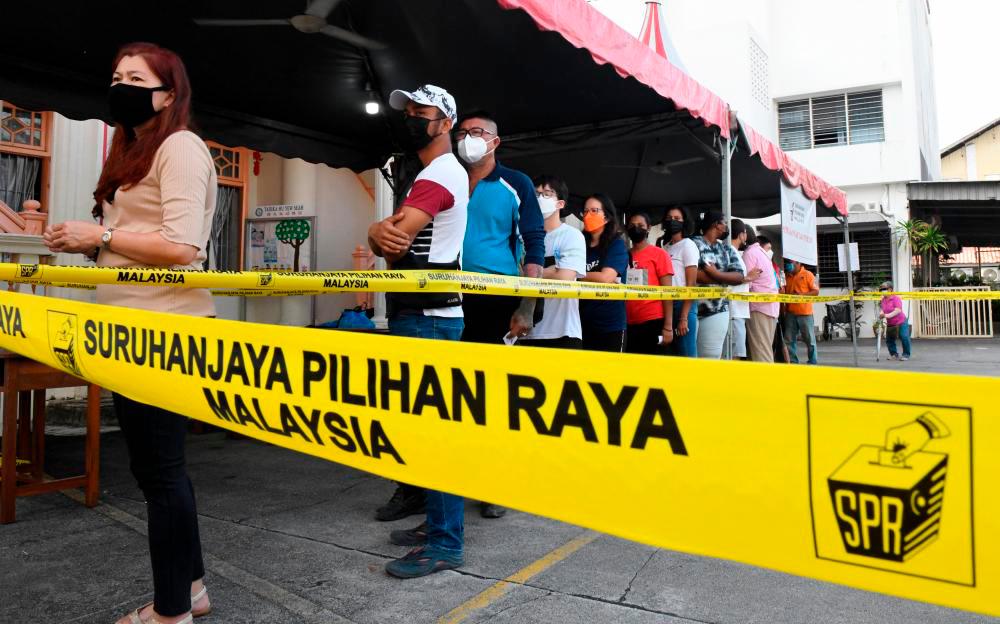 THE election saw millions crowding at polling stations. The systematic and meticulous arrangements made by the authorities at all voting stations facilitated the process of making it simple and swift, as well as without glitches and hassle-free.

It felt good watching the communities regardless of position, race, religion and gender coming out to vote. Even senior people, who were assisted by others, made it their concern to come out and make their voices heard. These were all moments of pride.

In the last few days, the nation was caught in a vortex of uncertainty. While political leaders scrambled to find a solution to an almost stalemate, every permutation and combination was assessed to accommodate a structure of governance that was acceptable to everyone.

It seemed frustrating that despite the millions of ringgit incurred to run the election, and that too during the most unfavourable time of the year, the decision as to who should be the prime minister was finally left in the hands of a few. Hence, the grumble of the common man hovering on the pointless need of an election.

As time ticked by, anxiety mounted, and with a national budget awaiting approval, even for the release of salaries, our nation was indeed in peril. Social media was bursting with conflicting news from both sides of the political divide.

However, despite the prevailing anxiety, which at the most resulted in coffee talks and group chats, everyone continued with their lives. Unlike in other nations where riots have erupted in the past when faced with similar post-election uncertainties, we were fortunate that such an eventuality which can result in loss of property and lives, did not materialise here.

We should congratulate ourselves for our maturity. This indeed is a moment of pride.

It was also hard to imagine the arch rivals communicating with each other after the election when they were literally attacking one another during the election campaign.

However, it was again a moment of pride when for the sake of national unity both Pakatan Harapan and Barisan Nasional were willing to cooperate to form a unity government as recommended by our King.

The real heroes were the election candidates. Some left the safe comforts of their homes and stable income to brave public scorn and attacks mostly aimed at the parties they represent.

The rains and floods did not help either. Those who won will be rewarded but those who lost did win some of the hearts of the voters. This too is a moment of pride for the willing candidates.

The outcome of the 15th general election also signified a changing landscape where “safe” seats could not be guaranteed. Even a “family” seat held for decades could not guarantee a win. Many senior politicians even lost their deposits despite decades of service.

It is, however, a moment of pride for these senior politicians since they chose to soldier on despite their age, instead of leading an idle, aimless life waiting for death. Their continuous willingness to serve is an important reminder to the young that age is just a number.

In some of the scenarios, candidates standing in the stronghold of the opposing party lost by a narrow margin, proving that competency of the candidates were the preferred criteria rather than the parties they represent.

This ability to distinguish between the candidate and the party is again a sign of growth. All these are moments of pride, and we should acknowledge that our nation is maturing.

Another moment of pride was the apology from DAP to the Sarawak government for its past action that had caused a rift and resentment between both sides.

The apology diffused the ongoing situation, and now Gabungan Parti Sarawak has joined the unity government. This is a moment of pride where forgiving and forgetting can be an antidote to end deadlocks.

Another moment of pride was when the 10th prime ministership was bestowed on Datuk Seri Anwar Ibrahim. This after a long political roller coaster struggle, ups and downs that included imprisonment and being forced to separate from his family.

Finally, after decades of sheer perseverance, his inspiring saga reached a climax, with him being chosen to lead the country. As the nation swelled with pride, it also shows that every struggle does bring rewards.

It is, however, the noble actions of our King who brought pride to the pinnacle. In the height of darkness, it is the wisdom and far-sightedness of His Highness that brought light, peace and solace to the nation.

The timely intervention and advice given to form the much needed unity government gave Malaysians a new hope.

In every which way we look, the election and its results make us proud to be Malaysian. The setting is right for the Asian Tiger to once again roar in the coming years. Congratulations everyone.

Prof Dr Suresh Govind FASc is Honorary Professor at University of Malaya, Chairman of the Board of Trustees for Yayasan Perpaduaan Malaysia, Director of Sathya Sai Academy for Human Values and Coordinator for Friendship Group for Inter-religious Service. Comments: letters@thesundaily.com