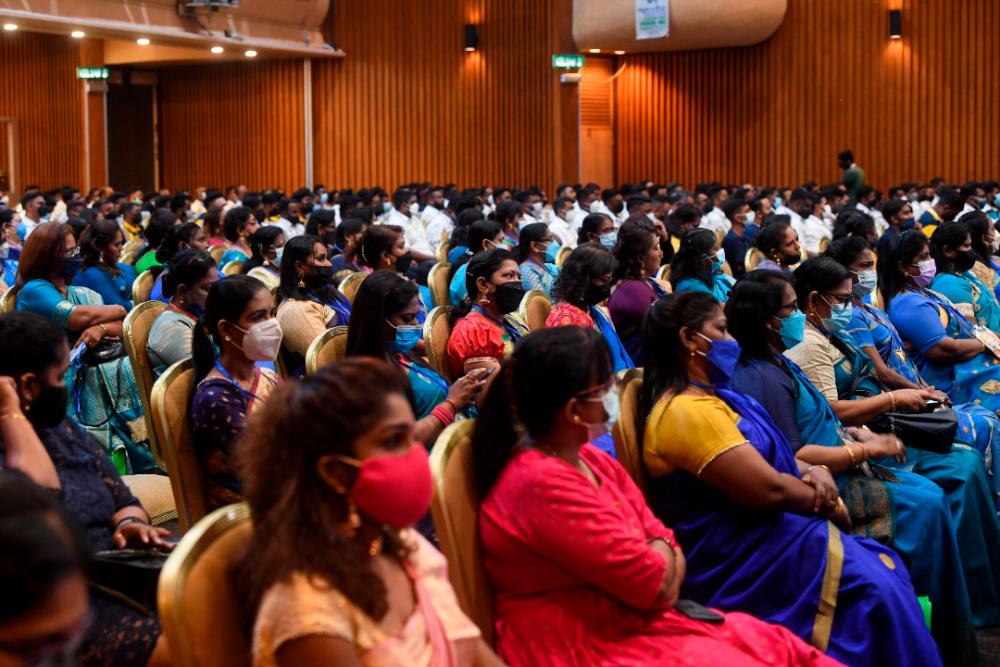 THE voices of Malaysian Indian concerns were heard loud and clear at the MIC’s 75th annual general assembly (MIC AGM) held on Dec 12 in Kuala Lumpur.

In his speech, MIC president Tan Sri Vigneswaran Sanasee raised many critical concerns faced by the Indian community and a number of specific recommendations for change.

Prime Minister Datuk Sri Ismail Sabri Yaakob in his speech responded to many of the key concerns and recommendations pertaining to the Malaysian Indian Blueprint, the cabinet committee, Mitra and related socio-economic concerns.

What is significant in this discussion is the prime minister is once again addressing community concerns under the theme of the Malaysian family noting that no individual or community “be left behind”.

The struggle among some policy advocates is to move away from ethicised approach to socio-economic development to a needs-based approach which addresses the concerns of all the poor and disadvantaged of all ethnic groups.

While this needs-based approach is essential for multi-ethnic societies, there is a place to highlight specific community concerns where the issues have a historical context of disadvantage, marginalisation and discrimination.

For working class Malaysian Indians who were formerly plantation workers but are now displaced settlers in the urban poor B40 low-cost flats, special intervention is needed.

The announcement on the revised version of the Malaysian Indian Blueprint is another key aspect of the federal government plan which was announced by the prime minister at the MIC AGM.

This matter was earlier highlighted during the tabling of the 12th Malaysia Plan in Parliament on Sept 27.

The MIB is a comprehensive document which can serve as an effective tool for socio-economic development in line with the national development agenda by 2030, including the 12th Malaysia Plan (2021-2025).

The MIB was first launched in 2017, but was sidelined since 2018. It is a comprehensive document prepared through a series of consultations with local communities, professionals and academics.

The revision, which will be released, is welcomed but the consultation process has been inadequate.

One reason is due to Covid-19. However, critics feel the process of consultations and discussions is as important to the final document.

The federal government is advised to host a series of public discussions before the launch to ensure a buy-in for all sectors of the Malaysian Indian community.

After 14 years the need for a Cabinet Committee on Indian Concerns was again raised. The prime minister has indicated he will consider the request.

It takes up matters which have a cross-cutting agenda and the implementation of all the key agencies.

Former prime minister Datuk Sri Najib Abdul Razak chaired the Cabinet committee when it was first set up in 2008 as deputy prime minister, and later when he became prime minister he continued it but it was discontinued in early 2018 with the change in the federal government.

If the Cabinet committee is reintroduced, then cross-cutting concerns which are under different ministries will be addressed such as urban poverty, education at all levels and skills training, entrepreneurship, job opportunities, citizenship, death in custody and health.

The delivery and implementation aspects will be given some key focus.

It will move the development agenda beyond Mitra as some aspects are under the mandate of other agencies and ministries.

There was specific mention of Mitra to be shifted back to the Prime Minister’s Department rather than be housed at the National Unity Ministry.

The main reason being that Mitra concerns are socio-economic and not really ethnic relations or national integration concerns.

Furthermore, the whole machinery is not geared towards addressing urban poverty and socio-economic disadvantage. Therefore, the shift to the Prime Minister’s Department is a better option.

There are concerns that Mitra needs to be strengthened and that it works closely with the Economic Planning Unit and the Implementation Coordination Unit in addressing the cross-cutting nature of community needs and concerns.

It is without doubt that Mitra must set up office or strong networks with coordinating staff in 38 districts in nine states where 95% of Malaysian Indians live.

A decentralised approach and a stronger people touch at the grassroots is most essential.

Therefore, field staff who are graduates from social science fields such as social work, psychology, sociology and anthropology might be best suited to work at the grassroots.

While all these political talks and promises seem impressive, the most essential aspect that is a major concern was not addressed by the prime minister or MIC president, which is how to address the trust deficit as well as address good governance and accountability concerns.

In politics it is said that public perception is everything. This cannot be just dismissed as a trial by public opinion in reference to the recent MACC enquires and arrest.

What is lacking is an assurance given by the federal government and Mitra to foster good governance and more effective methods of transparency and public disclosure on allocation from public resources.

I am surprised to note that although the Cabinet committee began in 2008, with the SITF, Tamil school action committee, SEED, Sedic and Mitra, there are no official comprehensive government reports on total allocations and the impact of the initiatives.

There are some good reports on the Tamil school development blueprint and Malaysian Indian Blueprint.

It has now been over 14 years. Some reviews took place in workshops and publications, and hosted by KITA UKM.

However, there is no full disclosure on funds, and who secured them and for what purpose.

There are many news reports, public questions and criticisms on these matters which have not been answered.

There is a need for comprehensive documentation of the Barisan Nasional, Pakatan Harapan and Perikatan Nasional years when these programmes, projects and allocations, as a review of 2008 to 2021 over a 14 year period, can be discussed during the 15th year anniversary of the special Indian intervention programmes along with the impact of socio-economic development and social mobility of the community.

Ismail Sabri announced many new allocations via Mitra and therefore, a good write-up of the governance structure and disclosure of the application process – on who receives the grants and for what purpose – must be in the public domain from 2022 onwards.

Mitra must undertake a much stronger community engagement process. Its staff must engage more with the grassroots as well as create more awareness programmes and greater disclosure of information and best practices to win the hearts and minds of the Malaysian Indian community.

At Mitra there must a good media and communications team. Mention of the role of opposition members of parliament within the Cabinet committee or Mitra Committee, or foundation, is a key departure from previous practices.

This bipartisan approach is very good for governance and transparency and the way forward to instil greater public confidence.

The socio-economic development agenda must be on the basis of both needs and a right to development.

It must be accessible to all irrespective of the sub-ethnicity or political affiliations. No one should be left behind.

The Indian voices are being heard in the corridors of power, however, it must result in the impact on the socio-economic conditions of the B40 and the grassroots for social mobility and social cohesion.

For trust building, real issues must be resolved and addressed. The challenge is before the federal government in 2022 and beyond.

Prof Datuk Dr Denison Jayasooria is Honorary Professor at the Institute of Ethnic Studies UKM and was the first Secretary to the Special Implementation Taskforce (SITF) under the Cabinet Committee on the Indian community (2010-2011). Comments: letters@thesundaily.com 1.Kyrgios eyes Wimbledon quarters as Nadal picks up the pace

5.No kidnapping of children for organ harvesting: Bukit Aman