Stop illegal logging once and for all

Halting deforestation or reducing the rate of natural forest loss will restore and rebuild the balance in the ecosystem, and minimise the incidence and severity of floods 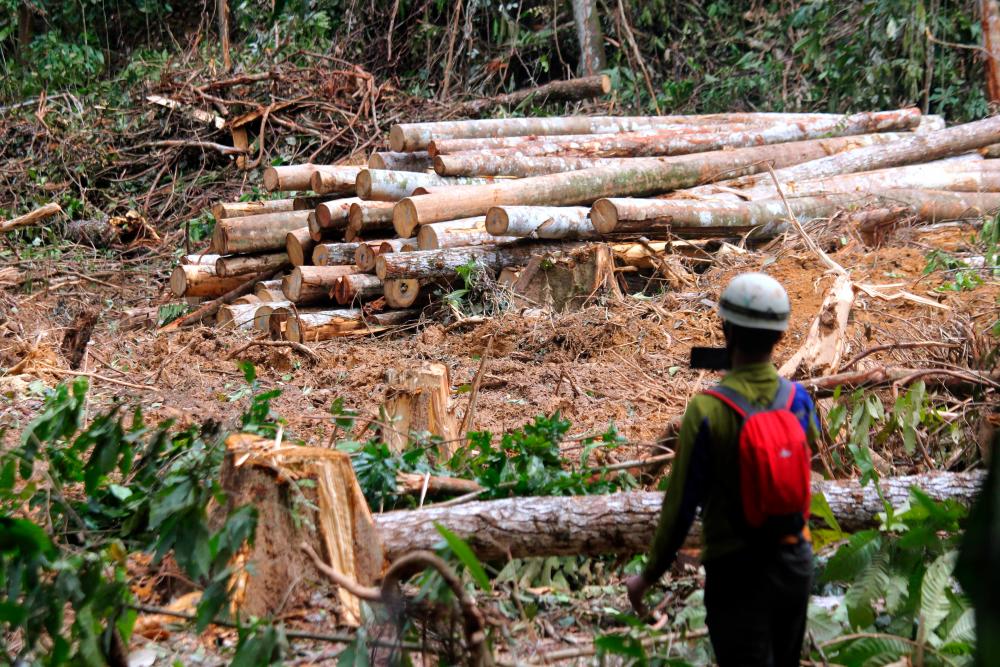 THE increased frequency of landslides and floods have had a devastating toll on lives, livelihoods and the environment.

While struggling to recover from the Covid-19 pandemic, society still has to deal with unexpected losses from environmental disasters.

In addition, eight Malaysian states such as Kelantan, Terengganu, Selangor, Pahang, Malacca, Negri Sembilan, Johor and Sabah have been facing some of the worst flooding in living memory.

From the deadly incidents such as that which occurred in the Tambun landslide, floods in the Yan district and the ongoing flooding in various states, the adverse effects of climate change – more extreme weather patterns than usual – are becoming more real and concerning.

Some might wonder: Why have more thunderstorms, heavy rainfalls, landslides and floods, for instance, been happening during recent years?

Aside from rising temperatures, the frequent occurrence of extreme weather events is associated with the human activity of illegal logging, which eventually disrupts the whole ecosystem of how nature works.

Illegal logging exists when timber is harvested, transported, processed, bought or sold in violation of national or sub-national laws.

It can also happen when forests are converted into agricultural plantations such as oil palm and rubber.

However, when companies prioritise profit over the environment they continuously cut down more trees to meet the increasing demand for timber, paper and derivative products, including packaging.

When individuals or for-profit corporations convert more natural forest areas into human land use, more carbon dioxide (CO₂) will be released back into the atmosphere.

Subsequently, it would lead to excessive greenhouse gases (GHG) in the atmosphere, contributing to a rise in the global average temperature of about 1.1°C above the pre-industrial average.

Such a phenomenon is not new in Malaysia. The Think City’s land temperature study indicated in March 2021 that a rise in temperature in urban areas is associated with the phenomenon of urban heat island (UHI), the lack of greenery and global warming.

As a result, five cities in Malaysia such as Ipoh, Johor Baru, Kuala Lumpur, Bayan Lepas and George Town recorded higher temperatures of between 1.64°C and 6.75°C over the last few decades.

Meanwhile, Kuala Lumpur only recorded a peak temperature increase of 1.64°C over 30 years between December 1989 and October 2019.

Under Budget 2022, the aim is to plant 20 million trees a year under the 100 million Tree Planting Campaign. Nonetheless, it is arguable that this is still not adequate to compensate for the tree cover loss over the past few decades.

While logging companies enjoy high-powered support from and privileged access to the state governments so as to obtain lucrative earnings from chopping down more trees, this comes at the expense of disrupting the basic/economic livelihoods of the Orang Asli in the interior, who are highly dependent on the forest for their survival.

Furthermore, even fast-growing trees will take at least three years to mature while other species require eight years or more.

As the tree planting effort takes time, a reduction in tree cover ultimately would increase the likelihood of surface water runoff, soil erosion, and a rise in river and sea levels – leaving communities staying in low-lying areas vulnerable to flooding. The loss of trees also would cause the sloped lands to be more prone to landslides.

When large amounts of debris from trees, shrubs and wood waste flows to downstream rivers, it will eventually destroy natural habitats and biodiversity in the years to come.

-> A temporary logging moratorium of one to two years (that can be renewed) – to enable the Forestry Department Peninsular Malaysia and the respective state forestry departments in collaboration with environmental NGO such as Sahabat Alam Malaysia to investigate companies involved in large-scale logging enterprises and determine the scale of exploitation and degradation.

The logging moratorium will also allow for a review of the approvals of the environmental impact assessment (EIA) by the Department of Environment, Environment and Water Ministry.

-> Implementation of security measures – under Part VIII of the National Forestry Act (1984) – to prevent illegal logging by systematic and regular use of drones, remote sensing satellites, helicopters and ground surveillance which must involve the participation of the Orang Asli;

At the same time, there should be a dedicated command and control centre in each of the regions or divisions within a state manned by the state forestry department (under Part IV of the 1984 Act) that is supported by and in coordination with the federal enforcement division;

-> Regular inspection and auditing to ensure logging takes place in compliance to the Forest Management System, including the Tree Harvesting Plan, Forest Operation Plan and Forest Engineering Plan, and not least the EIA approval guidelines (on forestry);

-> Promote the production and use of wood alternatives (such as hemp, wood composites, i.e., combining wood with recycled materials, flax, etc.) as an alternative to timber;

-> Total protection of the permanent reserved forests by abolishing the establishment of forest or monoculture plantations in line with the call made by SAM – going beyond the decision of the 79th National Land Council (Dec 2, 2021) to implement a 15-year moratorium;

-> Halting logging together with land and forest clearing activities in the tanah adat/pusaka (native customary lands) of the Orang Asli and of the bumiputras of Sabah and Sarawak;

The Forest Management Certification under the Malaysian Timber Certification Scheme (MTCS) should take into consideration the preservation of the Tanah Adat – consistent with the Selective Management System (SMS);

-> Regular cleaning and desilting of rivers and restoration or preservation of natural embankments through soil rehabilitation and planting activities;

-> Clamp down on open online advertising of licenses (as recently reported in The Vibes, January 10, 2022) by the Malaysian Communications and Multimedia Commission (MCMC); and

-> Full engagement with civil society and indigenous settlers that will improve multi-stakeholder participation, including in the process of EIA approvals (logging, mining).

Transparency in decisions about forest compartment allocation needs to be significantly improved and greater protection accorded to the rights of indigenous peoples.

During the moratorium period (as proposed above), the government should engage independent subject matter experts to study and evaluate the current state of affairs of logging nationwide.

The purpose is to come up with the necessary recommendations and an action plan on sustainable logging.

Halting deforestation or reducing the rate of natural forest loss will restore and rebuild the balance in the ecosystem, and minimise the incidence and severity of floods that ultimately cause undesirable societal disruptions and damage to human life and property.

Jason Loh and Amanda Yeo are part of the research team of EMIR Research, an independent think tank focused on strategic policy recommendations based on rigorous research. Comment: letters@thesundaily.com 2.Why first 72 hours are crucial for Turkey-Syria quake rescues

4.Search for student missing in Pulau Mawar called off