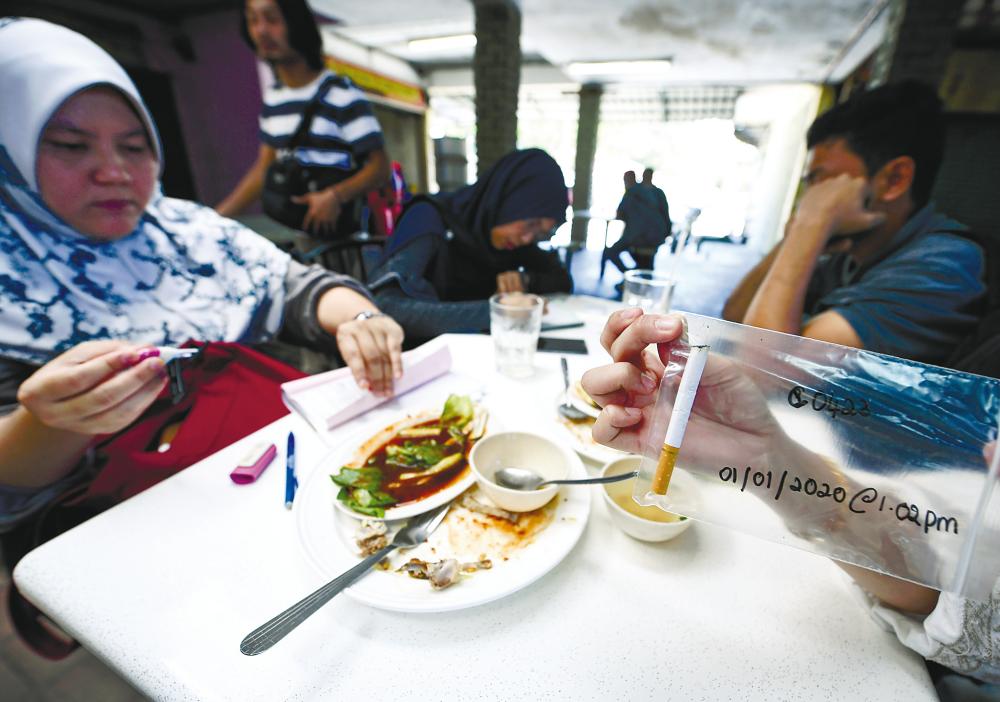 Government must continue its assertive enforcement of the smoking ban in public places. – Bernamapix

WE are a coalition of professionals from diverse disciplines, and we desire to reduce the public health threat of smoking and to protect the rights of non-smokers in Malaysia. Two recent developments are disappointing. There has been a small group loudly advocating for the rights of smokers, and the housing and local government minister has allocated RM1 million to build smoking areas.

We firmly disagree with this approach. We urge the entire government to unite against smoking, to end the mixed messages around its harms, to be good role models to our children and to protect our right to clean air.

Smoking kills. Every 20 minutes, one Malaysian dies from diseases caused by smoking, such as cancer, stroke or heart disease. The other five million smokers in Malaysia have a higher risk of developing these fatal diseases. Meantime, they might suffer from symptoms such as breathing difficulties, wheezing or chest pains.

Every year, Malaysian taxpayers will pay RM3 billion to treat these diseases. That number does not account for indirect costs of human suffering, lowered quality of life and loss of economic productivity. Even second-hand smoke kills non-smokers, with 7,000 chemicals in that smoke and 69 known to cause cancer. These are all preventable, if we only stop smoking.

There are underlying reasons for these problems. One, nicotine is one of the most addictive substances in the world, sometimes comparable to cocaine or heroin. Two, Big Tobacco spends tens of billions of dollars on marketing, advertising and lobbying for looser controls on tobacco products. Three, economics and politics often come in when health should be the only consideration. With this landscape, it is clear that tobacco is one of the greatest public health threats in Malaysia.

Despite these clear harms, it is surprising and disappointing that Malaysia remains divided about the need to reduce smoking. We believe that the vast majority of Malaysians are against smoking, but not against smokers. They are our fathers, sons, brothers or husbands (43% of men smoke, but only 1% of women), and we want them to stop smoking for the sake of their own health.

The smokers’ group wrongly claims their right to smoke wherever they want. In democratic terms, the minority does not get to impose their rights on the majority. In legitimacy terms, governments have the duty to protect all its citizens from poor health choices, and society accepts this duty by wearing seat belts and vaccinating our children. In public health terms, while smokers may have the right to light up and harm themselves, they do not have the right to harm others through second-hand smoke. In religious terms, Malaysia’s National Fatwa Council declared that smoking is haram in 1995. Therefore, the government is on solid scientific, political and religious territory to fight smoking by reducing the public space available for smokers.

The decision to allocate tax ringgit to build smoking areas is wrong for several reasons. First, our government must not enable and normalise smoking behaviour, especially in children. Second, it is not tax justice or simple logic for the 80% of non-smoking Malaysians to help the 20% who smoke, especially when we are worsening their health. Third, no other country in the world is increasing the public space for smokers, and Malaysia should not ruin our reputation. Finally, all ministries, agencies and departments must unite against smoking, not work against each other in counter-productive ways.

We urge the government:

» To continue the assertive enforcement of the smoking ban in public places, and to continue issuing fines as prescribed under the law. These fines are consistent with our philosophy of prescribing fines for various acts that harm the public and our health, such as speeding violations and not wearing helmets.

» To channel the RM1 million from the Housing and Local Government Ministry to smoking cessation programmes in primary care clinics. The Health Ministry must also allocate more to these programmes. Fifty-two per cent of all smokers attempt to quit and we must help them.

» To unite all ministries, departments and agencies against tobacco. We must achieve the World Health Organisation’s target of a smoking prevalence of 15% by 2025 and meet commitments to the WHO Framework Convention on Tobacco Control, which we ratified in 2005.

» To remove economics and politics from decisions surrounding tobacco, and to focus only on the public health, scientific, religious and justice elements. We cannot be captured by Big Tobacco’s lobbying.

Smoking kills, and we must stop it to achieve the Sihat Bersama 2030 vision. We want Malaysians to live long, healthy and prosperous lives. We stand against the scourge of tobacco and urge the government to protect the rakyat and lead the world in our smoking cessation efforts.