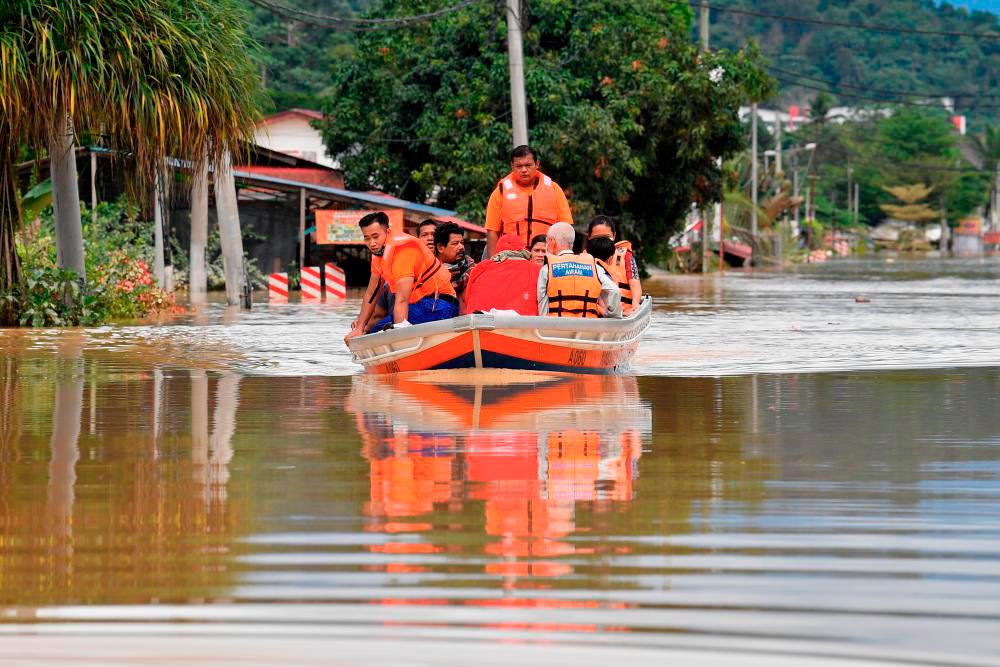 ALTHOUGH Prime Minister Datuk Seri Ismail Sabri Yaakob’s call to activate the district disaster management committees was timely, the current administration has yet to convincingly demonstrate a sense of urgency in constructing and implementing the applicable flood mitigation infrastructure and facilities.

Eventually, it may result in heightened vulnerability to flooding during the Northeast Monsoon season from November to March 2023, resulting in more loss of lives and damage to properties, and the economic and financial losses which have to be borne by the government.

During the inaugural Climate Crisis Symposium 2022 at the Parliament building on Sept 5, Environment and Water Minister Datuk Seri Tuan Ibrahim Tuan Man expected Malaysia to spend RM392 billion in the next 78 years on flood mitigation measures.

Besides allocating RM15 billion “off-budget” to address flood problems in the next eight years (2023 to 2030), the government also placed RM230.71 billion and RM126.55 billion in funds for flood mitigation and urban drainage as well as coastal infrastructure respectively until 2100.

In addition, Federal Territories Minister Datuk Seri Shahidan Kassim indicated that the high-capacity groundwater storage tunnel in the Kuala Lumpur city centre will take about three to five years (between 2025 and 2028) to complete.

However, due to the “La Nina” phenomenon since September 2020, Malaysia has experienced above-normal rainfall even during the non-monsoon season (i.e, from April to May).

The Klang Valley (encompassing the Federal Territories of Kuala Lumpur and Putrajaya, as well as Selangor) has experienced the worst floods after two days of continuous rainfall between Dec 17 and 18, 2021, followed by three (minor) floods on March 7, April 25 and May 25.

As of the fourth quarter of 2021, the Klang Valley consists of almost one-third of the entire country’s population – 9.1 million out of 32.6 million.

Notwithstanding, higher population density can be part of the factors triggering frequent flash floods in the urban conglomeration.

Yet, environmental concretisation and overdevelopment are other causes of repeated flash floods in the Klang Valley.

In short, La Nina is a weather pattern that brings warmer-than-normal sea-surface temperatures to the southern Pacific Ocean around northern Australia, New Guinea and the islands of Indonesia.

While the Malaysian Meteorological Department predicted a 60% chance for the La Nina condition to continue until December, the World Meteorological Organisation (WMO), on the other hand, foresees the event will last through the end of this year.

WMO further stated that the La Nina is a mysterious “triple dip” existing for three consecutive years – the first in this 21st century – caused by the impacts of global warming.

Hence, some coastal regions such as Southeast Asia and many parts of Australia have more rain than usual, increasing the risk of flooding.

Does this imply Malaysia will have even more severe flooding by the year-end than in December last year due to the increasingly unpredictable weather?

Between Dec 15 and Dec 18, 2021, the Klang Valley experienced the worst flooding after registering more than 2,500mm of rain.

Similarly, Kelantan, Terengganu, Pahang, Perak, Negri Sembilan and Malacca were also affected by the “once in 100 years” flood, whereby at least 54 were dead and two were missing. Moreover, the July 4 floods in Baling, Kedah, claimed three lives.

More than 1,400 residents had to be relocated to three temporary evacuation centres.

Notwithstanding, the government has allocated billions of ringgit to solve flood woes over the past few decades.

Yet, the lack of efficient and effective monitoring mechanisms have prevented Malaysia from implementing flood mitigation projects within the projected timeline.

Due to the lacklustre attitude toward the adverse effects of climate change from previous administrations over decades, total losses from the floods in several Malaysian states from end-2021 until early this year alone amounted to RM6.1 billion.

Subsequently, the World Bank Climate Change Knowledge Portal revealed that an average of 23,000 people were affected by floods during the 2016 to 2020 period.

Therefore, to minimise the occurrence of floods, EMIR Research would like to propose several policies for the current administration to execute immediately:

According to the National Property Information Centre, occupancy rates for purpose-built office and retail spaces are decreasing even though supply rose in 2021.

Meanwhile, the number of malls vacant more or less stagnated within the same five-year period.

The additions of new and often larger complexes have dragged the occupancy rate down from 81.3% in 2017 to 76.3% last year.

Furthermore, the total number of units within the high-rise segment, including residential high-rise, commercial serviced apartments and small-office home-office units that remained unsold and under construction in 2021, was 111,804.

The rise in the vacancy rate for both commercial and residential buildings is partly due to changing consumer habits after the pandemic – preferring to purchase items online rather than from physical outlets and a flexible working approach.

Hence, now is the time for the government to pause all new commercial and residential building construction projects and overcome the property oversupply issue.

At the same time, the slowing down of construction projects should provide space for the government and local authorities to implement additional mitigation measures such as identifying and earmarking detention and retention ponds in strategic sites in the capital city, for example.

The pause would also allow the government and the local authorities to improve and adjust and, therefore, issue new guidelines (for new construction projects) that will help mitigate flooding.

2. Build consensus between developers, architects and the local councils to turn land or property into green spaces

In general, green spaces refer to initiatives that encourage the development of open space in an urban setting, providing people with the avenue to exercise, relax and socialise.

For instance, parks, waterfronts, walking trails, sporting fields, community gardens, forest reserves, etc are green lungs that could integrate the natural environment with the built environment within the city itself, creating havens of peace and quietness within the bustle of the city life.

While slowing down the rapid urbanisation rate in Malaysia (76.6% in 2020), the green spaces could act as the sponges of the city to divert excess water from downpours.

3. Clear solid pollutants that clog drains and rivers every week

The government could install simple, custom-designed surveillance Internet of Things (IoT) modules at designated spots along the river to keep track of the clearance progress.

The IoT package can consist of a pollution detection sensor, a camera, a microcontroller, a transmitter and a rechargeable lithium-ion battery.

Swales are shallow, broad and vegetated channels that could convey stormwater and treat run-off to reduce pollutants. Thus, the water does not collect on land and reduces the likelihood of flooding events.

The government could remind the citizens not to throw any rubbish into the drain or river through social media, radio and television broadcasts regularly.

Parents and teachers could also educate their children that rubbish will disturb the water flow, which leads to flooding afterwards.

While these measures could prevent (minor) floods from happening in the near term, the government meanwhile still has to identify the flood hotspots via the Geographic Information System, in cooperation with MetMalaysia and National Disaster Management Agency.

Once categorising which flood hotspots need urgent repairs, the government can carry out upgrading work for the existing flood mitigation, urban drainage and coastal infrastructure.

Nonetheless, a rigorous check and balance mechanism are essential to ensure any stakeholders involved abide by project specifications and timelines.

By advocating efficiency and transparency throughout the construction process, the flood prevention infrastructure can be completed sooner rather than 78 years later.

More Malaysians in the low-income category can not afford to endure another round of flooding.

They are becoming more vulnerable in coping with the rising cost of living – ranging from food, fuel to loans (housing and car). Suradit aiming for some inspiration at Mercuries Taiwan Masters S’gor to build staging point for MMEA in Sabak Bernam S’gor to build staging point for MMEA in Sabak Bernam

Suradit aiming for some inspiration at Mercuries Taiwan Masters

3.S’gor to build staging point for MMEA in Sabak Bernam

4.Suradit aiming for some inspiration at Mercuries Taiwan Masters