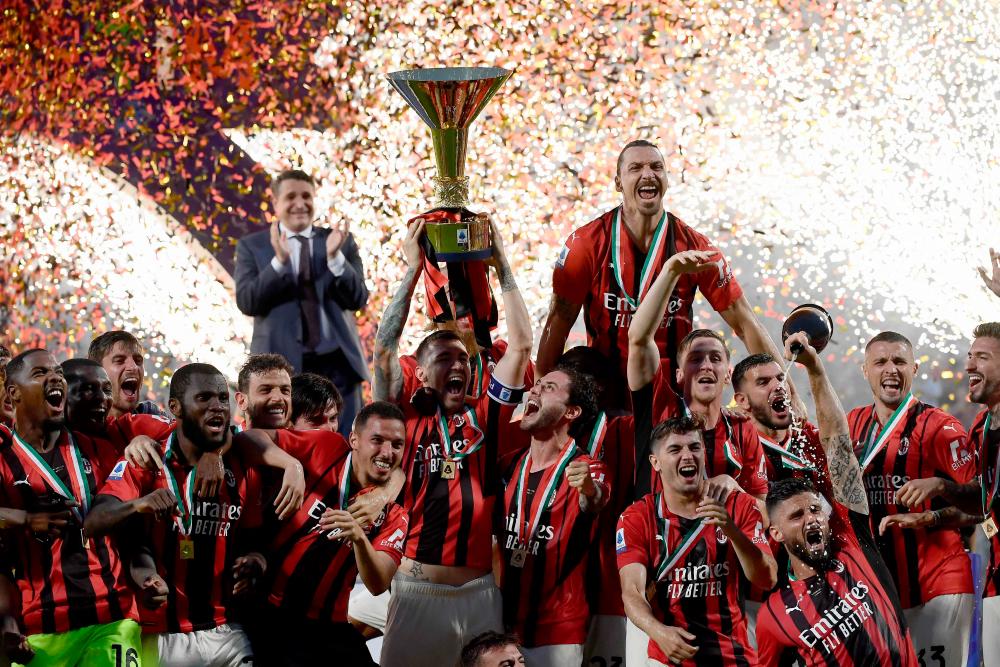 MILAN: AC Milan won their first Serie A title in 11 years on Sunday after beating Sassuolo 3-0 in Reggio Emilia to snatch the crown from local rivals Inter Milan on the final day of a thrilling campaign.

Needing just a point to claim the Scudetto Milan swept their hosts aside thanks to an Olivier Giroud brace and another from Franck Kessie in the first half in front of an army of away fans at the Mapei Stadium.

Stefano Pioli's Milan finished two points ahead of Inter, who beat Sampdoria 3-0 at the San Siro but could not retain their title.

Fans partied in Milan and sang 'We Are The Champions' with the players on the pitch in Reggio Emilia as the 'Rossoneri' returned to the top of the Italian game after years of poor teams and financial problems since their last league crown in 2011.

“We deserved this for always having believed it was possible,“ said Pioli after winning his first ever major trophy as a coach at the age of 56.

“My players never gave up, they were all fantastic... I’ve enjoyed it because I could see that my players enjoyed it too.”

Milan were imperious in winning their sixth match on the bounce and securing a title which for long tracts of the season looked like Inter's to lose.

They were helped by another exciting display from winger Rafael Leao, and big game display from Giroud, who has struck some of the most important goals of Milan's charge to the title despite only netting 11 times all season in the league.

Sassuolo immediately wilted in the face of a Milan onslaught and practically handed Giroud the chance to net an almost identical double in the first 32 minutes, both laid on by Leao.

And four minutes later Leao burst down the right and cut back for Kessie, who smashed in the third to sign off in perfect fashion ahead of his move to Barcelona as a free agent in the close season.

“When I came here (over Christmas 2019) I said that I would take Milan back to the top and that I would win the title,“ said Zlatan Ibrahimovic, who was at Milan the last time they won the league.

“This is a great group of players. We’ve worked hard, quietly and in the end we’re the ones who have won, because two years ago the situation was very difficult.”

Inter fans packed the San Siro in the hope that their team would pounce on a Milan slip-up but it was they who had more problems breaking the deadlock against a Samp team with nothing to play for.

A bubbling atmosphere slowly dissipated as news of Milan's goals came in and there was also frustration at Inter's inability to make the most of their clear dominance.

As so often this season it was Ivan Perisic who took matters into his own hands, calmly finishing into the bottom corner with his left foot after being nicely set up by a rampaging Nicolo Barella.

From there Samp gave up the ghost and two goals in as many minutes from Joaquin Correa just before the hour ensured Inter would finish with a win.

Home fans applauded their team off the pitch despite what must have been a painful way to lose their Serie A crown, with the hardcore in the Curva Nord chanting coach Simone Inzaghi's name in a show of faith which is likely to be shared by the club.

“I think the team need to be applauded. It was an brilliant season which could have been an extraordinary one,“ Inzaghi told DAZN.

“We have a bit of a sour taste in our mouths as we won nine of our last 10 matches, but it wasn’t enough.”

Salernitana completed their miracle escape from relegation despite being thumped 4-0 at home by Udinese, Cagliari going down to Serie B after only drawing 0-0 at bottom side Venezia.

Cagliari had to win to have any hope of staying up but failed to find a goal and finished one point and a place behind Salernitana just inside the drop zone.

Fans celebrated and invaded the pitch in Salerno after their team, which had been bottom for almost the entire season, were saved from relegation with the lowest ever points total of any team to ever stay up in Serie A history. - AFPPIX