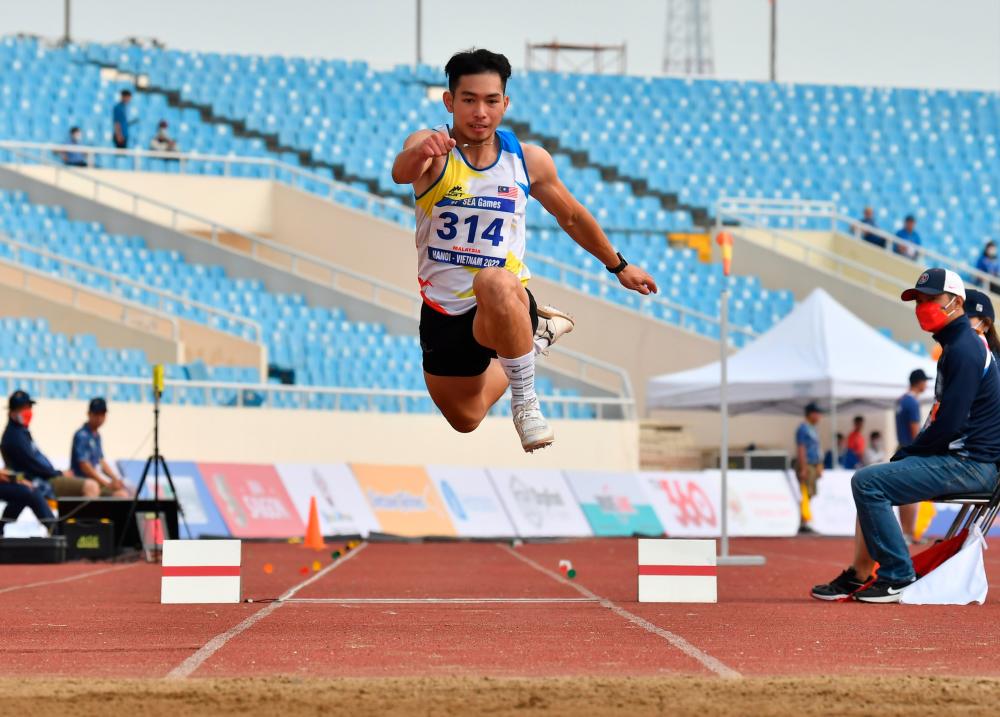 HANOI: National athlete Andre Anura Anuar managed to heal not one but two disappointments by grabbing gold in the men’s triple jump of the 31st SEA Games today, which was also Malaysia’s 22nd gold.

The soaring success of the 22-year-old Sabahan at the My Dinh National Stadium here buried his long jump shortfall in the pit several days ago and also ensured that the Malaysian athletics camp met the target of five gold medals at the Games this time.

Andre Anura came to Vietnam with the intention of grabbing gold in the men’s long jump, after having to settle for silver on his debut at the 2019 Philippine SEA Games with a national record jump of 8.02m.

It was only 1cm behind Sapwaturrahman (8.03m) of Indonesia who struck gold with a championship record.

However, in the men’s long jump in Hanoi on Sunday, Andre Anura only managed fifth place with a record of 7.24m, after four of his six jumps were dashed due to mistakes.

Despite that setback, Andre Anura managed to record a winning 16.51 metres in today’s triple jump, which surpassed the personal best record of 16.09m set at the Malaysian Open in March.

“Today I was satisfied to leave behind the long jump defeat and I’m proud of my new personal record. I felt sorry for the coach (Ahmad Firdaus Salim), who was feeling pensive for two days because we had come (to Vietnam) with the hope of a (long jump) gold medal.

“So today I was able to win gold, thanks to the coaches, friends and everyone who helped me,“ Andre Anura told reporters.

The success also ensured that Malaysia defended the title won by Muhammad Hakimi Ismail since the 2015 edition, after which he was unable to participate because of surgery.

Meanwhile, Norliyana Kamaruddin had to settle for bronze in the women’s hepathlon with 5,262 points, behind Vietnam’s Nguyen Linh Na (5,415) and Sarah Dequinan Noveno (5,381) of the Philippines.

The silver medallist of the women’s discus, Queenie Kung Ni Ting, tried her luck in the shot put but was only able to place sixth with a throw of 11.63m.

The track and field events will continue tomorrow, with Nauraj Singh Randhawa expected to defend the men’s high jump gold, while Muhammad Azeem Fahmi and Muhammad Arsyad Md Saat will take on the region’s fastest in the blue riband event -- the men’s 100m. - Bernama