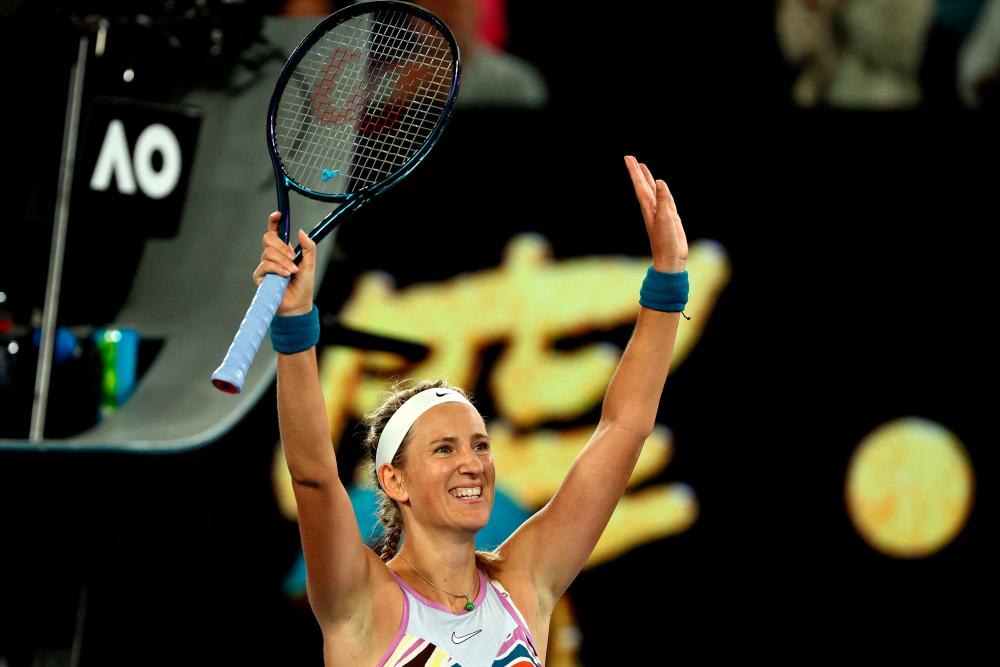 Belarus’ Victoria Azarenka celebrates victory against Jessica Pegula of the US during their women’s singles quarter-final match on day nine of the Australian Open tennis tournament in Melbourne on January 24, 2023. AFPPIX

MELBOURNE: Victoria Azarenka reached her first Australian Open semi-final since winning the title in 2013 when she knocked out third seed Jessica Pegula 6-4, 6-1 on Tuesday.

The Belarusian 24th seed outlasted her American opponent in a marathon 64-minute first set before running away with the second to set up a last-four encounter against Wimbledon champion Elena Rybakina at Melbourne Park.

“Well, it hurts to beat her because I always want her to do well,“ said Azarenka, 33, who also won the Australian Open in 2012 and is a close friend of Pegula’s.

“But at the same time I have to play my best tennis. She has been playing amazing, very consistent. I knew from the first point I had to bring it.”

Pegula was in her third Australian Open quarter-final and had never reached the semi-finals of a Slam in four previous attempts, failing to win a set in any of them.

It was a sorry statistic that was to be extended under the roof at Rod Laver Arena.

The 28-year-old is the epitome of a late bloomer, with 18 of her 30 Grand Slam match wins coming since the start of last year.

She had dropped only 18 games en route to the quarter-final, fewer than any other player left in the draw.

But Pegula was immediately put under the pump by the relentless groundstrokes of her opponent.

Azarenka's defence and her ability to put the pressure on during long rallies was all too evident in the first set.

Azarenka sped into an early 3-0 lead then forced Pegula to save six break points in an attritional 10-minute fourth game, before the American finally got on the scoreboard.

She saved two set points on her serve to get to 3-5 and two more in the next game, before turning the tables and breaking Azarenka to get back to 4-5.

Azarenka would not buckle, moving forward to take the ball early in Pegula's next service game.

The tactic brought her two more set points and this time the Belarusian succeeded on the first to take the opener 6-4 after 64 relentlessly physical minutes.

“We had so many rallies and I just wanted to try and stay there and take opportunities,“ said Azarenka.

“I’m very proud that I executed my game plan really well. It’s so amazing to be in another semi-final of a Grand Slam.”

Early breaks were exchanged in the second set before Azarenka made the decisive move.

She broke for 3-1 and held her own service game, with an increasingly frustrated Pegula complaining to her player's box.

“I don’t know what to do. The ball’s not going anywhere,“ shes said.

Serving for the match Azarenka brought up two match points but only needed one as she powered through in 1hr 33min. - AFP