Barty party at Australian Open or can Collins crash celebrations? 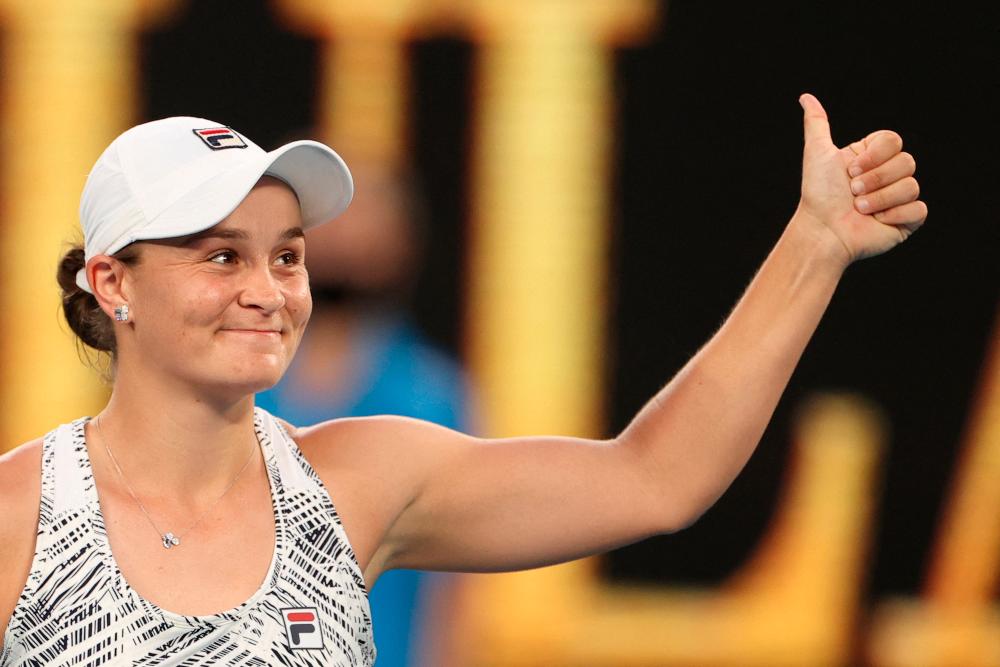 MELBOURNE: World number one Ashleigh Barty (pix) will look to become the first Australian woman for 44 years to win her home Grand Slam today, but to do it she needs to get past a rejuvenated Danielle Collins in the form of her life.

American Collins faces a daunting task in the women’s singles final on Rod Laver Arena in front of Barty’s fiercely partisan Australian Open crowd. But the resurgent American is ready to tackle the top seed, and clear favourite.

Collins was in “the zone” and almost flawless as she pummelled Polish seventh seed Iga Swiatek into submission in the semi-final.

Now the 28-year-old knows if she can find the same sweet spot on Saturday that she has a huge chance.

“I think for me when I have a really clear idea of my tactics and what I want to do, it’s easier for me to get there,” said the 27th seed, who is playing pain-free in Melbourne for the first time in years after emergency surgery last April for endometriosis.

“But then, you know, just like any other athlete and I think all of us on tour, you know, we have days where we try to get in the zone and we can’t.”

The big-hitting Collins will need to bring more than just raw power to counter the tactical nous of Barty, who has been rampant so far, winning 20 of 21 sets this year.

As Jessica Pegula put it after losing to the Australian in the quarter-finals: “I think she’s definitely living in everyone’s head a little bit.”

Collins has pushed Barty hard in their previous four matches, winning their last encounter in Adelaide 12 months ago in straight sets.

As well as feeling the weight of Collins’ fearsome groundstrokes, Barty could also buckle under the expectation at her home Slam.

She is the first Australian woman into the decider in Melbourne since Wendy Turnbull in 1980 and is aiming to become the first winner since Chris O’Neil in 1978.

The two-time Grand Slam champion ― at the 2019 French Open and Wimbledon in 2021 ― appears relaxed and ready to accept the extra pressure.

“I’m able to switch off when I’m not here on site and that makes the time when we are on site more enjoyable, more special, and then we switch on and get ready to go,” said Barty.

A talented Australian multi-sportswoman who also played professional cricket, Barty has demonstrated her ability to “problem-solve” while on court, a trait she has worked on with coach Craig Tyzzer.

That will again come into play against Collins, who is not just one of the game’s hardest hitters, but also one of its most passionate and emotional characters in stark contrast to the unflappable Barty who it seems barely sweats.

“It’s going to be a challenge for me to try and neutralise as best that I can,” said Barty.

“I think the challenge is going to be trying to get her off-balance.” ― AFP 3.Safety Audit results off trailer involved in fatal USAS students’ crash to be known next week