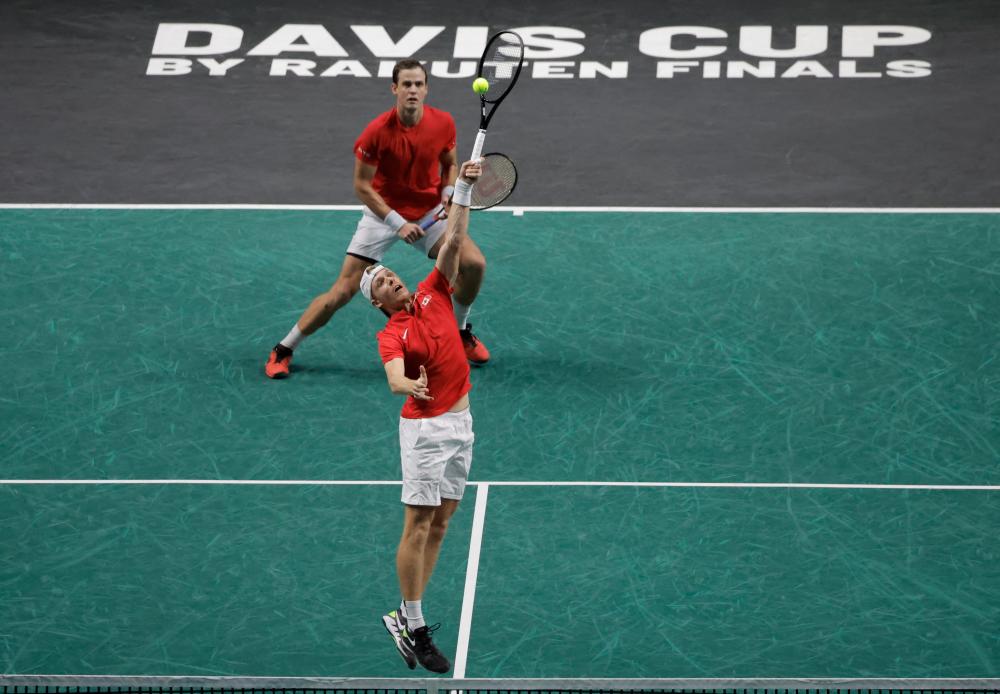 TORONTO: Canada beat Germany 2-1 to reach the Davis Cup semifinals where they will face an Italy who advanced earlier yesterday with a stunning upset of the US in Malaga, Spain.

Vasek Pospisil and Denis Shapovalov clinched the winning point for Canada with a 2-6, 6-3, 6-3 triumph over Kevin Krawietz and Tim Puetz in the decisive doubles match.

The victory in front of a crowd that included plenty of Canada supporters, was all the more impressive considering the German duo had entered the match 8-0 when paired together at the Davis Cup and clinched the winning point seven times.

“Having this kind of crowd support really helps kind of carry the momentum all the way to the end and I felt like Denis and I were playing better and better,” Pospisil said in his on-court interview.

“It’s really tough because we don’t play too much doubles throughout the year so it’s a challenge to be sharp out there but given the circumstances I thought we played extremely well, especially as the match went on.”

After dropping the first set, Pospisil and Shapovalov found their footing and consolidated early breaks in the second and third sets before sealing the win on their second match point when Shapovalov ripped a crosscourt forehand winner.

Canada’s Felix Auger-Aliassime had forced the decider when he brushed aside Oscar Otte 7-6(1), 6-4 after Jan-Lennard Struff gave Germany an early lead with a 6-3, 4-6, 7-6(2) win over Shapovalov.

Canada, whose best finish in the competition came in 2019 when they finished runners-up to Spain, will play Italy tomorrow while Australia and Croatia meet today in the other semifinal.

In the day’s first quarterfinal, Italy remained on course for a first Davis Cup crown since 1976 with a 2-1 win over the US as the doubles pair of Simone Bolelli and Fabio Fognini beat Jack Sock and Tommy Paul in a thrilling decider.

American Taylor Fritz had levelled the tie at 1-1 after Lorenzo Sonego gave Italy a shock lead, and Bolelli and Fognini produced a flawless display in their 6-4, 6-4 win to help their country reach the semis for the first time since 2014.

Earlier, Sonego held his nerve in a tight second set to get past Frances Tiafoe 6-3, 7-6(7) and put Italy – who are without the injured duo of Matteo Berrettini and Jannik Sinner – ahead.

But Italy’s joy was shortlived as Fritz dragged the record 32-time winners back into the tie, battling from the brink in the first set tiebreak to beat Lorenzo Musetti 7-6(8), 6-3 and set up the doubles decider. - Reuters

1.England’s Bellingham ‘has everything’ but now comes biggest test yet

3.The Good, The Bad and The Wild: New Activities Abound at Sunway Lagoon’s Night Park!