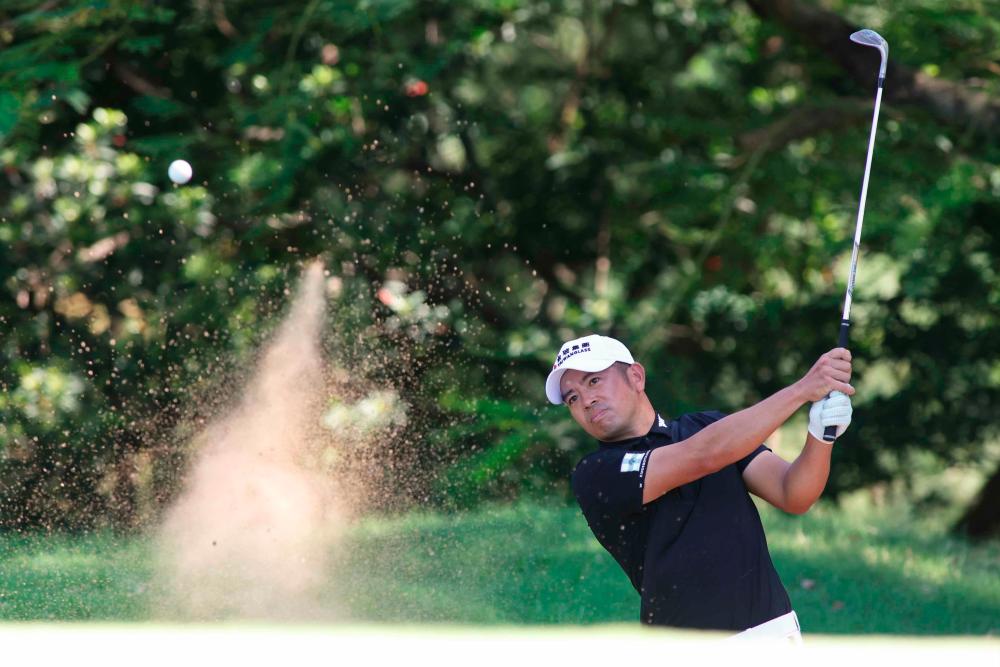 TAMSUI: Chinese-Taipei’s Chan Shih-chang moved a step closer to winning an Asian Tour event on home soil for the first time when he took a share of the lead along with India’s Rashid Khan after the third round of the US$1 million Mercuries Taiwan Masters today.

Four-time Asian Tour winner Chan carded a three-under-par 69 to reach 11 under for the tournament and catch overnight leader Khan, who fired a 73.

Thailand’s Sarit Suwannarut and Siddikur Rahman from Bangladesh are tied for third, three shots back after scoring 68 and 69 respectively, at Taiwan Golf and Country Club.

Two of Chan’s victories have come in the last 10 months, and the kind of form that saw him win those titles was on display again today. He nailed five birdies and made two bogeys; the last of those dropped shots came on 14, which prompted the best possible reaction as he made his final two birdies on the next two holes.

“My target was to shoot 68 actually, but still happy with a 69. I made a few good birdies out there, like the four footer on 15. I can’t wait to go out tomorrow. I will show them what I got!

“I know I need to hit my irons well and putt well to score on this golf course so I will aim to do that tomorrow. My iron play was not sharp today. If I can improve on my iron accuracy tomorrow, I should have a good chance to win.”

Chan won the Blue Canyon Phuket Championship at the end of November last year, which was the Asian Tour’s first event back after a two-month break caused by the pandemic; and he won in Thailand again this year at the Royal’s Cup in February.

Three of his Asian Tour successes have come in The Kingdom, while another in Japan and having finished joint third in the Mercuries Taiwan Masters last year and equal second the year before a first Asian Tour victory in Chinese-Taipei is of the highest priority to the 36 year old.

Khan had started the day with a four-shot lead having returned a 65 on day two and while he will have been disappointed to card a 73, that would have been tempered by the fact that he is still in the lead and in with a chance of his first win on the Asian Tour in eight years.

He struggled on the outward nine unable to make birdies and dropped a shot on seven to make the turn in one over, and when he made bogey on 10 it appeared the chasing pack would overwhelm him.

Both Chan and Thailand’s Pavit Tangkamolprasert led on the back nine, but Khan rallied with a birdies on 13 and 15 to stay in the fight.

He said: “I told myself, this is not the golf course which we played for the first two days, so just hang in there. And you know, if you make two or three birdies on last eight holes, you’re still fine.

“I mean I’m still playing in the last group, and I have a chance, so I’m just gonna focus on that.”

Khan won both of his Asian Tour titles in 2014 – the SAIL-SBI Open in India, and the Chiangmai Golf Classic, in Thailand – and the signs have been there this season, particularly after a joint runner-up placing in the Mandiri Indonesian Open in August, that the long wait for a third win could before over soon.

Sarit is looking for his first win on the Asian Tour and put himself in an excellent position to do that with the second lowest round of the day.

“I think I just woke up on the right side of the bed today,” said the Thai golfer.

“I mean yesterday was just a tough day, everything just seemed unlucky. Today everything just, it’s not like lucky, but I hit it good. Wedges, irons, drives and putted good. I think that’s it, everything was just good.”

Siddikur’s name on the leader board will be a pleasing sight for many. The two-time winner on the Asian Tour has not been in contention for a while.

Said the 37 year old, who last won at the 2013 Hero Indian Open: “It was a wonderful day, and I was hitting it very good. And I was really calm, not like other tournaments, so I think that helped a lot. My short game was also very good today. So overall, it was a wonderful day.

“I have always played good here, so I have a very good memories and very good confidence to play this golf course.”

Pavit impressed for much of the day but surprisingly made three bogeys on the trot from the 15th and closed with a 71, to sit four behind the leaders, along with countryman Nitithorn Thippong, who signed for a 73.

Nitithorn is trying to win for the third time this season.

Scores after round 3 of the Mercuries Taiwan Masters 2022 being played at the par 72, 6923 Yards Tamsui Course course (am - denotes amateur):