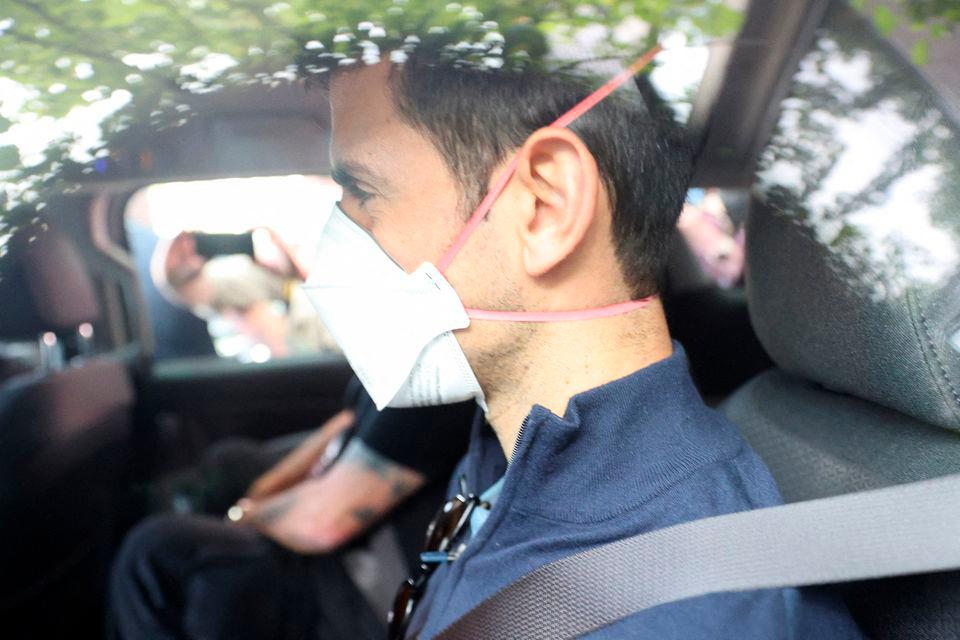 Serbian tennis player Novak Djokovic departs the Park Hotel while under immigration detention, to convene with his legal team after his visa to play in the Australian Open was cancelled a second time, in Melbourne, Australia, January 16, 2022. REUTERSpix

MELBOURNE: Novak Djokovic (pix) left a detention centre today to join his lawyers for a last-gasp Federal Court bid to avoid deportation from Australia and play for an unprecedented 21st Grand Slam title.

The tennis world number one’s fate will be decided by three court justices in what is expected to be a final, decisive phase of his high-profile court battles Down Under.

Australia’s conservative government has for a second time ripped up Djokovic’s visa, saying his anti-vaccine views are a public threat and could cause “civil unrest” unless he is deported.

But Australia’s full Federal Court will hear the detained Serbian’s appeal in an emergency online session from 9:30 am (2230GMT).

AFP video journalists and photographers filmed Djokovic being driven from his detention centre, the five-storey former Park Hotel, to his lawyers’ offices in the city, where more than a dozen journalists were gathered outside.

The hearing comes on the eve of starting day at the Australian Open, where Djokovic still hopes to defend his title and become the first player in history to bag 21 Grand Slams.

Djokovic’s high-powered legal team are expected to kick off proceedings, arguing that his detention and his deportation are “illogical,” “irrational” and “unreasonable.”

If the 34-year-old loses, he will face immediate deportation and a three-year ban from Australia — dramatically lengthening his odds of winning a championship he has bagged nine times before.

If he wins, it sets the stage for an audacious title tilt and will deal another humiliating blow to Australia’s embattled prime minister ahead of elections expected in May.

The court’s format — a panel of three justices — leaves little room to appeal any decision.

Prime Minister Scott Morrison’s government has tried and failed to remove Djokovic once before — on the grounds he was unvaccinated and that a recent Covid infection was not sufficient for a medical exemption.

A lower circuit judge ruled that officials at Melbourne airport made procedural errors when cancelling his visa.

For a few days, Djokovic was free to train before a second visa revocation and a return to the notorious Melbourne immigration detention facility.

Leader of the gang

For millions around the world, Djokovic is best known as a gangly all-conquering tennis champion with a ferocious backhand and some polarising views on science.

But in court filings, Australia has cast him as a figurehead for anti-vaxxers and a catalyst for public disorder.

Not only could Djokovic encourage people to flout health rules, Hawke said, but his presence could lead to “civil unrest”.

Many Australians — who have suffered prolonged lockdowns and border restrictions — believe Djokovic gamed the system to dodge vaccine entry requirements.

Experts say the case has taken on significance beyond the fate of one man who happens to be good at tennis.

“The case is likely to define how tourists, foreign visitors and even Australian citizens view the nation’s immigration policies and ‘equality before the law’ for years to come,” said Sanzhuan Guo, a law lecturer at Flinders University.

The case has also been seized on by culture warriors in the roiling debate over vaccines and how to handle the pandemic.

The minister admitted that Djokovic is at “negligible” risk of infecting Australians, but argued his past “disregard” for Covid-19 regulations may pose a risk to public health and encourage people to ignore pandemic rules.

The tennis ace contracted Covid-19 in mid-December and, according to his own account, failed to isolate despite knowing he was positive.

Public records show he attended a stamp unveiling, youth tennis event and granted a media interview around the time he got tested and his latest infection was confirmed.

“If you wanted to ban Novak Djokovic from winning the 10th trophy in Melbourne why didn’t you return him immediately, why didn’t you tell him ‘it is impossible to obtain a visa’?” Vucic said on Instagram.

‘With or without him’

Djokovic is currently tied with Roger Federer and Rafael Nadal with 20 Grand Slam titles each.

Spanish great Nadal took a swipe at his rival on Saturday as players complained the scandal was overshadowing the opening Grand Slam of the year.

“The Australian Open is much more important than any player,” Nadal told reporters at Melbourne Park.

Defending Australian Open women’s champion Naomi Osaka called the Djokovic saga “unfortunate” and “sad” and said it could be the defining moment of his career.

“I think it’s an unfortunate situation. He’s such a great player and it’s kind of sad that some people might remember (him) in this way,” she said. — AFP