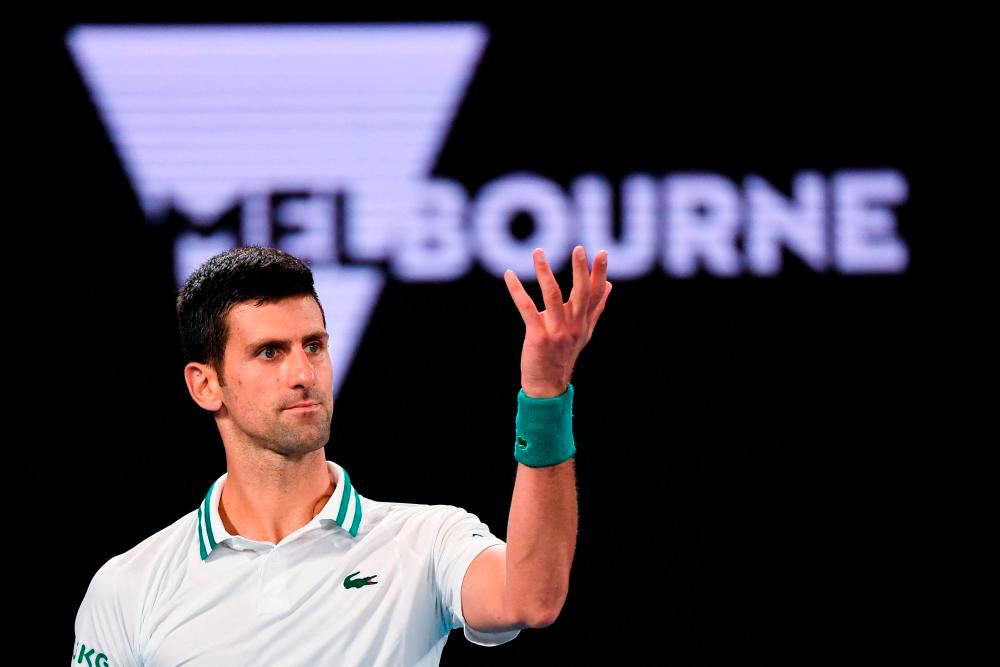 (FILES) In this file photo taken on February 21, 2021, Serbia’s Novak Djokovic reacts after a point against Russia’s Daniil Medvedev during their men’s singles final match on day fourteen of the Australian Open tennis tournament in Melbourne. AFPpix

MELBOURNE: Novak Djokovic intends to play the Australian Open in 2023, tournament chief Craig Tiley said Sunday while blaming “miscommunication” for his deportation ahead of this year’s event.

The world number one's visa was cancelled ahead of the season-opening Grand Slam over his Covid-19 vaccination status, an incident that tarred the lead-up.

He flew out of Melbourne a week ago after failing in a last-gasp bid to stay and target a record 21st major title following a protracted legal battle with Australian authorities.

Tiley has kept a low profile since, but asked Sunday whether the unvaccinated Serbian planned to return for the 2023 tournament despite the possibility that his visa could be revoked for up to three years, he replied: “Yes.”

“Obviously, he’s got to play out this year, but that will be his intention,“ he told public broadcaster ABC.

“At the end of the day, he’s the number one player in the world and he really loves the Australian Open.”

But Daniel Andrews, premier of Victoria state that hosts the tournament, insisted Djokovic would only be welcome if he was vaccinated.

“Rafa (Nadal) had it right. It could all have been avoided if he just got vaccinated, and that fellow might think he’s bigger than the tournament. He’s not,“ Andrews told reporters.

“That’s why the tournament’s happening without him. And it’s a great success.”

“It will hurt him for a long time and it will be difficult to get it out of his head,“ he told the Sport.sk website, while blasting the “unjust political process” that led to Djokovic being booted out.

Tiley blamed “forever-changing conditions” and “miscommunication” with the federal government for his deportation after Djokovic was initially granted an exemption from Tennis Australia’s chief medical officer.

The rationale was that he had contracted Covid-19 in the past six months, but it was challenged and after a legal battle he ultimately had to leave.

Tiley said Tennis Australia sought clarity on multiple occasions from national authorities, but the evolving nature of the Omicron variant meant that “there was a lot of contradiction and complexity with information”.

“Even just in the past week since (the ruling), things have changed in relation to the response to the pandemic,“ Tiley said.

“We were at the beginning of Omicron and that’s why we were constantly seeking clarity, and there was a lot of complexity and contradiction of information before, after and it continues to be all the way through.”

Djokovic is now back in Serbia with his image seriously damaged and his future unclear.

Reports have suggested he could sue Tennis Australia to recover his court and travel costs, but asked if legal action was anticipated Tiley said: “No”. - AFP