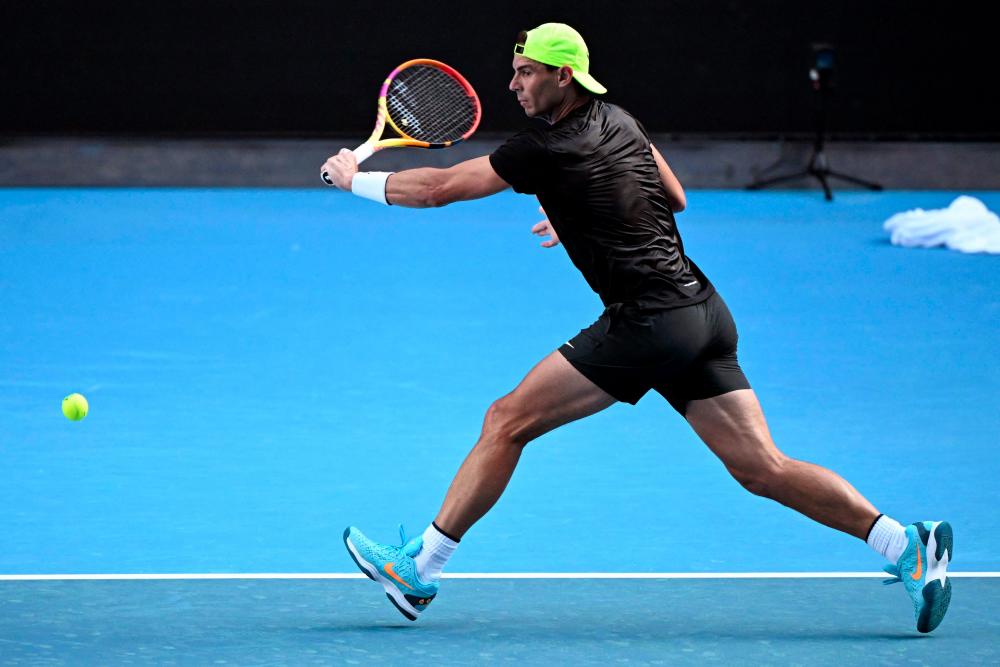 Spain's Rafael Nadal hits a return during a practice session ahead of the Australian Open tennis tournament in Melbourne on January 12, 2023. - AFPPIX

ADELAIDE (Australia): Britain’s Jack Draper fired a warning to Rafael Nadal by storming past Karen Khachanov and into the Adelaide International semi-finals on Thursday.

The promising 21-year-old faces defending champion Nadal in the first round of the Australian Open next week and showed he was in fine touch with a 6-4, 7-6 (7/3) victory over Russia’s Khachanov.

It was a measure of revenge for Draper after losing to his third-seeded opponent last week.

Draper lifted his ranking from 262 to 40 in a breakthrough 2022 and his Adelaide semi is his third in the past six months.

“It’ll be amazing to play on court with him, he’s a great champion,“ Draper said of 22-time Grand Slam winner Nadal. “I want to play really well and I want to compete hard and do the best I can.”

Draper added that he believed he could achieve “great things” but there was “a mountain of work to do”.

While the talk continues to grow around him, the young Briton is not allowing it to influence his approach.

“There’s always going to be a lot of noise. It’s important to keep your head down and just get on with the job because you’re more likely to do it that way,“ he said.

Draper will take on South Korea’s Kwon Soon-woo for a place in the final after the world number 84 dominated Sweden’s Mikael Ymer 6-1, 6-2 in under an hour.

His reward is a clash with Thanasi Kokkinakis after the Australian battled past Serbia’s Miomir Kecmanovic 6-3, 6-7 (4/7), 6-1.

In the women’s draw, Daria Kasatkina claimed her second straight win over a former Grand Slam champion to reach the last four.

“We were both dropping serve early. Once I started to hold, the game changed a bit,“ said the world number eight.

“Overall I was really happy with my performance and I kept my composure in the breaker.”

Russian sixth seed Veronika Kudermetova came from a set down to topple American Danielle Collins 4-6, 7-6 (7/5), 6-1 and will next face Switzerland’s Belinda Bencic after her 6-2, 3-6, 6-4 win over French world number four Caroline Garcia. - AFP