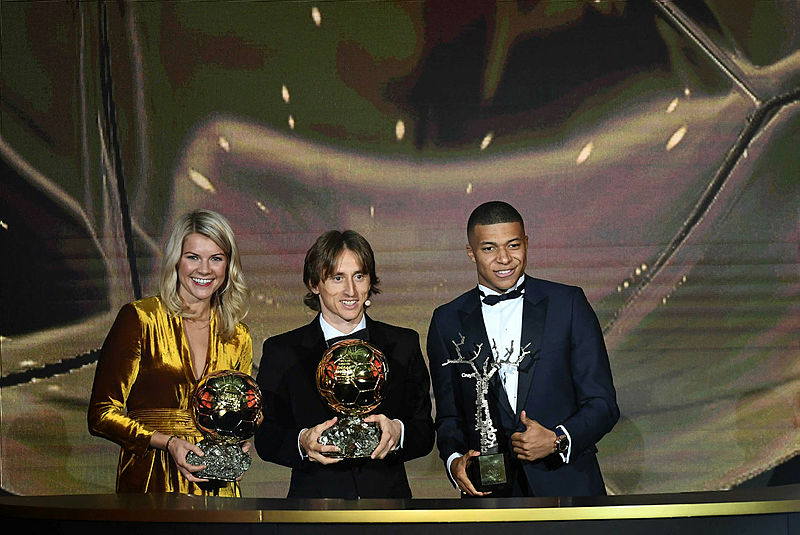 PARIS: One of the enduring images from 2018 will remain Kylian Mbappe consoling Lionel Messi in the Russian city of Kazan, just after the final whistle in France’s 4-3 win over Argentina in the last 16 of the World Cup.

This was to a large extent Mbappe’s year, as the teenage superstar exploded on the world stage by scoring twice in that game, the first World Cup brace by a teenager since Pele in 1958.

Still, just 19 at the time, Paris Saint-Germain forward Mbappe also became the first teenager to score in a World Cup final since Pele as France won the trophy for the second time by beating Luka Modric’s Croatia 4-2 in the final on a dark and damp Sunday in Moscow.

The World Cup itself was a joy to watch, a richly entertaining tournament full of memorable games and concluding with the highest-scoring final since 1966.

From Spain’s 3-3 draw with Portugal in the group stage, featuring a Cristiano Ronaldo hat-trick, to Belgium’s 2-1 quarter-final win over Brazil and Croatia’s epic semi-final defeat of England in extra time, it was studded with memorable matches.

But it was much more than that. “Maybe this is one of the weirdest World Cups,“ said Croatia coach Zlatko Dalic.

His team’s remarkable run to the final and the premature exits of Germany, Spain and Argentina showed that international football can still be unpredictable.

It will also probably be remembered as the tournament that marked the end of Messi and Ronaldo’s dreams of lifting the World Cup.

They were eliminated on the same day in the last 16, and 2018 could be remembered as the year when the Messi-Ronaldo era ended.

Both enjoyed prolific years, with the Argentine driving Barcelona to a Spanish league and cup double and Ronaldo winning another Champions League with Real Madrid before moving to Juventus in the transfer of the year.

However, their numbers are down on the phenomenal figures of past years, and instead, it was the impish playmaker Modric who won the Ballon d’Or, and FIFA’s best player award, on the strength of his role in Madrid’s Champions League triumph and Croatia’s World Cup run. He was also the best player in Russia.

Ronaldo and Messi had shared the Ballon d’Or between them for the last decade, winning five each. Ronaldo was second this time, while Messi was fifth, behind Antoine Griezmann and Mbappe.

“Nobody has the right to compare themselves to them. They are among the best in the history of the sport,“ Modric told France Football. “To follow on from them is incredible, and I am proud of it.”

Crowned the best young player, Mbappe will hope the future belongs to him.

At club level, his PSG side are among the teams desperate to end Real’s run of three straight Champions League titles.

The Spaniards beat Liverpool in this year’s final in Kiev with Gareth Bale scoring twice and will hope to retain the trophy next year with the final in Madrid.

Meanwhile, there are lots to look forward to at international level in 2019.

The new UEFA Nations League has been an instant hit. It will conclude with the four-team finals in Portugal in June, with the hosts facing Switzerland and England playing the Netherlands in the last four.

“We want to go beyond where we went last summer, and we’re in the mix for what is a really important staging post in our development,“ said England manager Gareth Southgate of that competition.

However, the main international events in 2019 are elsewhere.

The first 24-team Asian Cup takes place in the UAE in January and February, before Brazil hosts the Copa America and the United States defend the Concacaf Gold Cup.

France are hoping to win another World Cup, as they host the 24-team women’s tournament in June and July, with the USA the defending champions.

And a decision is expected soon on whether Egypt or South Africa host the 24-nation Africa Cup of Nations in June and July after the Confederation of African Football stripped Cameroon of the tournament due to delays in their preparations. — AFP