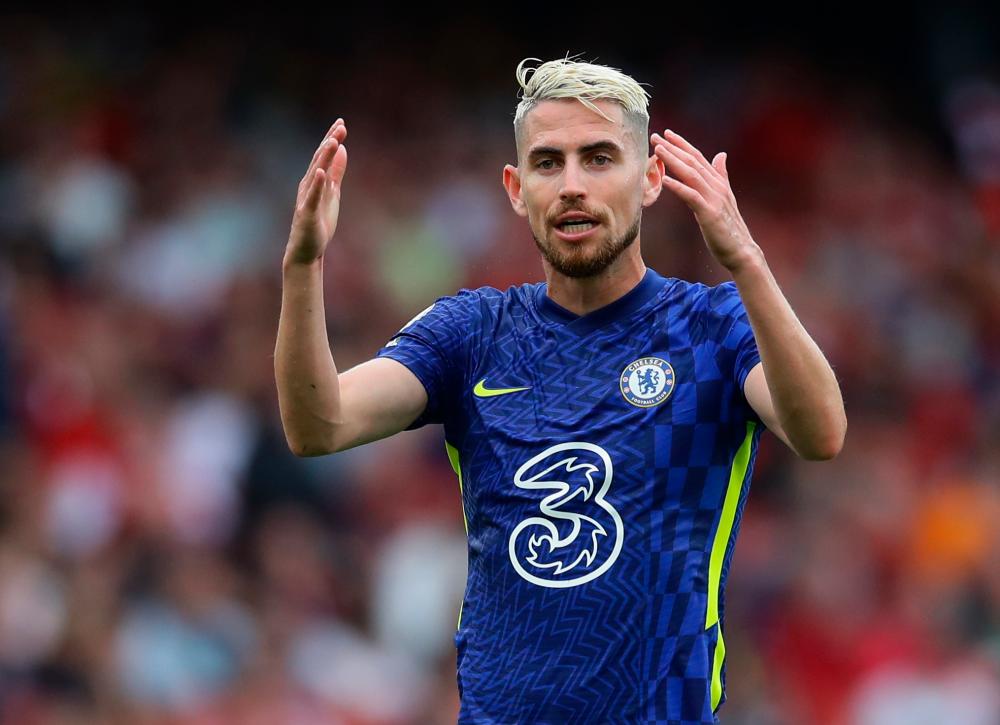 LONDON: As he prepares for a significant milestone in Chelsea’s Champions League clash with Juventus on Wednesday, Italy midfielder Jorginho (pix) can reflect on the golden year that silenced his critics.

Jorginho will make his 150th appearance for Chelsea if he plays in the Group H tie in Turin.

Underappreciated in England until the last few months, Jorginho has emerged as a key player for Chelsea and Italy after winning the Champions League and Euro 2020 in the space of just a few weeks.

The 29-year-old was recently named in the UEFA Men’s Player of the Year for 2021 and has been mentioned as a leading candidate for the prestigious Ballon d’Or.

It is a remarkable renaissance for a player who became public enemy number one among Chelsea fans after a turbulent first season with the Premier League club.

“All those who didn't believe in me, who criticised me, I have to thank them too. They gave me even more encouragement. They motivated me to work harder and harder to prove they were wrong,” Jorginho told UEFA.com.

“Everything that happened was thanks to the people that stood by me – family, friends, my agent, my team-mates, coaches, physios, kitmen...”

Jorginho was such a scapegoat for the failed Maurizio Sarri reign, that for him to be at Chelsea long enough to reach 150 appearances seemed unlikely just 18 months ago.

In his maiden campaign with the Blues, he was relentlessly targeted by supporters frustrated with the team's unimaginative performances under Sarri.

Sarri had paid £50 million (RM286 million) to bring the Italy midfielder with him from Napoli amid intense interest from Manchester City.

The pair were unveiled on the same day at Stamford Bridge in 2018, but there was no honeymoon period for either man in west London.

‘Sarri-ball’ – the manager’s possession-based philosophy – failed to translate from Serie A to the more frenetic environment of the Premier League.

And Jorginho’s habit of passing sideways or backwards to ensure Chelsea kept the ball infuriated fans who demanded a more forward-thinking approach.

Unloved by both the fans and many of his players, Sarri ultimately departed at the end of his only season in charge.

Jorginho was in and out of the team during Lampard’s reign, with his value to Chelsea still a matter of impassioned debate among supporters and pundits when Thomas Tuchel took charge in January.

His hop-step penalty taking style aside, Jorginho often appears a reluctant star, happy to shun the spotlight off the pitch and employing a low-key approach on it.

But Tuchel had no doubts about Jorginho’s value, appreciating that his astute reading of the game, tactical awareness and metronomic passing made him an ideal ‘number six’ capable of leading the transition from defence to attack.

Jorginho has grown in stature while working for Tuchel, making him essential to Chelsea’s hopes of retaining the Champions League and winning a first English title since 2017.

For a player whose unselfish approach makes other shine, this is Jorginho’s moment in the spotlight.

“He’s a top guy. He’s in love with this game. He never stops transmitting this energy that he’s really into thinking about tactics and loves to be involved and feel a true connection with the game,” Tuchel said.

“That makes him a very important player and a huge link in the middle of the pitch, not only for us but also for Italy.” – AFP