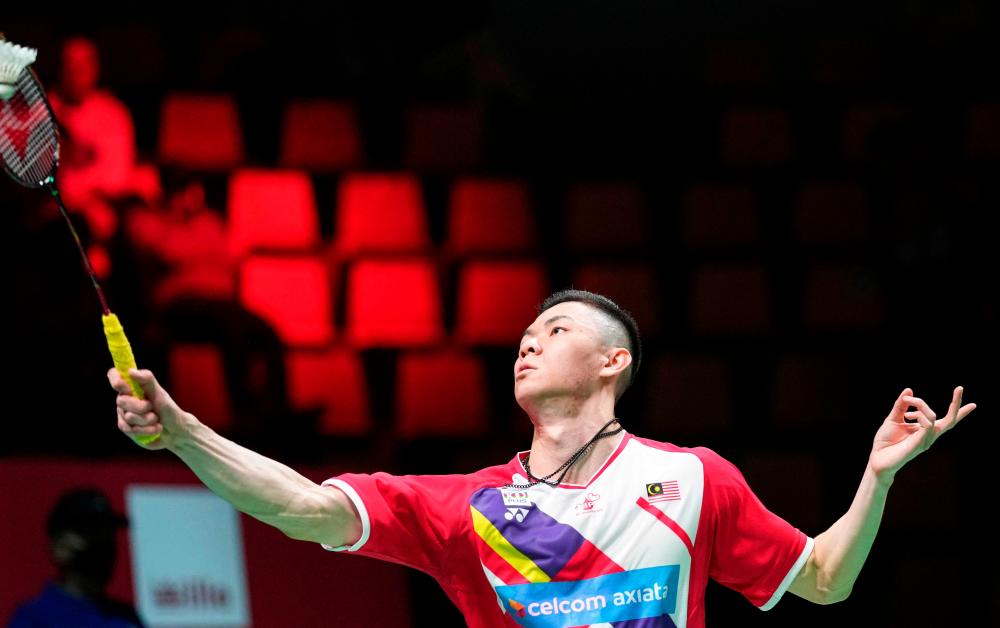 AARHUS (Denmark): “I fought one point at a time.” That was Leong Jun Hao’s apt description of how he produced the day’s biggest upset when he defeated world number 16 Kenta Nishimoto 21-19, 21-18 in the third singles of Malaysia’s 4-1 loss to Japan in their Group D Thomas Cup clash today.

With Malaysia already 4-0 down at the Ceres Arena here, the 22-year-old showed no fear for his higher-ranked opponent to carve out a famous win.

Although it has been a long time since he took part in a competitive match following his first-round exit in the Spain Masters in May, the 120th-ranked Jun Hao showed great fighting spirit against the 27-year-old Kenta.

“Although we were already behind by then, I didn’t think too much about it since we had already qualified for the quarter-finals. So, I gave it my all. Since he was a top player, I took to the court focused on getting the points and build my confidence as the match wore on.

“I was a bit nervous when I first stepped onto the court as it’s been a long time since I’ve competed in such a big tournament but I continued to fight. If I am fielded tomorrow (in the quarter-finals against Indonesia), I will do my best to help the team achieve victory,” he said.

Meanwhile, team captain Lee Zii Jia (pix) was disappointed with himself for failing to capitalise on his 21-15 first-game win over world number one Kento Momota before the Japanese ace went on to win the next two games 21-12, 23-21 in the first singles.

In fact, the All England champion came close to clinching the first point for Malaysia, which would have boosted the team’s spirit, when he led 20-18 in the third game.

“I could see from the very first game that Momota looked kind of confused with my performance. But in the second game, he was more stable and changed his strategy. Since I was trailing quite far behind, I gave up and prepared myself for the rubber game.

“It’s obvious that after 10 meetings so far, the gap between us is closing. The training we have been doing is paying off,” he said, adding that he hopes to get a good rest ahead of tomorrow’s quarter-finals against Indonesia.

Momota, meanwhile, admitted that his win over Zii Jia was very meaningful as it helped inspire his teammates to beat Malaysia.

Kanta Tsuneyama then clinched Japan’s winning point when he downed Cheam June Wei 22-20, 21-13 in second singles before Akira Koga-Yuta Watanabe made it 4-0 for Japan with a 21-10, 21-16 in over Goh Sze Fei- Nur Izzuddin Mohd Rumsani in the second doubles tie.

Badminton Association of Malaysia (BAM) coaching director Wong Choong Hann, meanwhile, was full of praise for Jun Hao, saying the youngster was “cool, calm and collected” in picking points off the Japanese.

He also admitted that the two doubles pairs and June Wei were off-colour today and hoped that they would bounce back tomorrow (against Indonesia).

“Zii Jia also put up a very mature performance today but he needs to further improve his game management at the crucial points so that he can seal the deal,” he said. - Bernama