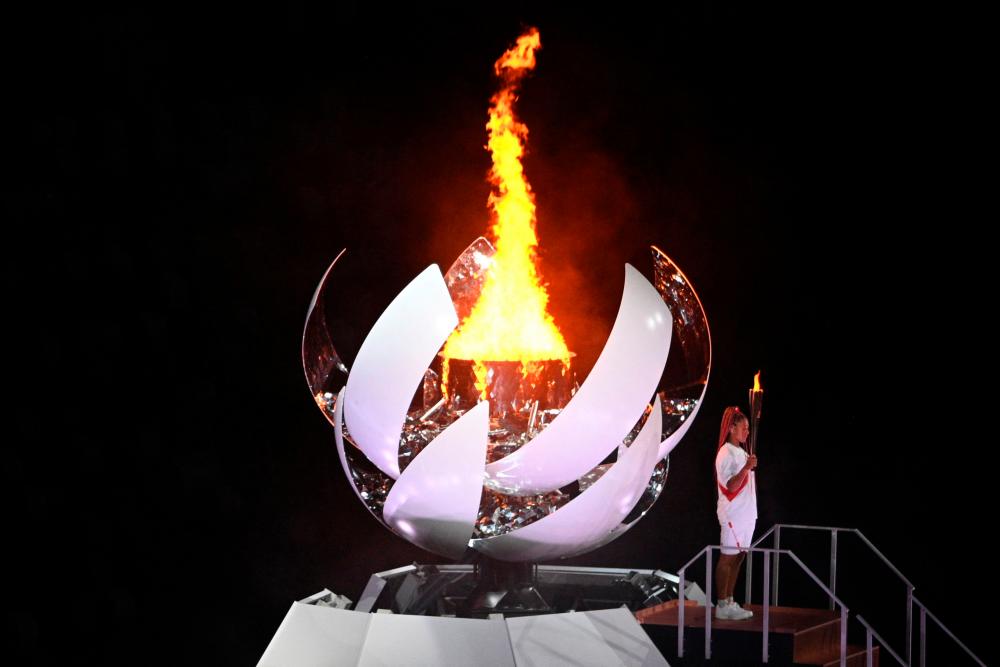 Japan’s tennis player Naomi Osaka holds the Olympic torch after lighting the Olympic flame in the Olympic Stadium during the opening ceremony of the Tokyo 2020 Olympic Games, in Tokyo, on July 23, 2021. AFPpix

TOKYO: After numerous challenges and hiccups over the past 18 months, Japan finally defied the Covid-19 pandemic to successfully stage a high-tech and vibrant Tokyo 2020 Olympics Opening Ceremony last night.

It was held in an almost empty stadium, with fewer than 1,000 dignitaries attending the ceremony at the 68,000-capacity Olympic Stadium in Tokyo. This is in stark contrast to the tens of thousands of spectators one would normally see in previous opening ceremonies.

The number of participants, most of them wearing masks, was also relatively small in this one-year delayed Games due to the global pandemic compared to previous editions.

Nevertheless, the opening ceremony was held in mesmerising style, with drones, fireworks and musical performances as each of the competing nations marched into the stadium, led by Greece, home of the Ancient Olympic Games, with host nation Japan the last to enter the stadium among the 206 nations, including the refugee’s team.

But the opening would not be complete without drawing attention to the impact of the Covid-19 pandemic and a touching tribute was made when a moment of silence was held for all those who had lost their families and friends to the virus.

After the athletes, officials and coaches had taken the Olympic oath, there was a virtual rendition of the iconic song “Imagine” by some of the world’s top singers, including John Legend and Keith Urban. The song, made popular by the late John Lennon, basically encourages listeners to imagine a world of peace, without materialism, without borders separating nations and without religion.

The Games were officially declared open by Japan’s Emperor Naruhito, witnessed by a smattering of world leaders and senior figures, including French President Emmanuel Macron and the United States First Lady Jill Biden.

This was then followed by more spectacular artistic displays as well as a heartwarming gesture of some frontliners involved in the fight against the pandemic being given the honour of carrying the International Olympic Committee (IOC) flag to be hoisted.

After more enchanting performances and speeches that touched on solidarity, came time for the highlight of the opening ceremony - the lighting of the cauldron.

With some of the frontliners also involved in passing the torch around the stadium, it was finally handed over to none other than four-time tennis Grand Slam women's singles champion Naomi Osaka to light the cauldron in style.

Themed ‘United by Emotion’, the Tokyo 2020 Olympics Opening Ceremony has carved its own history, with each nation having two flag bearers (male and female) for the first time, while the number of oath-takers was extended from three to six (two athletes, coaches and judges) to highlight the importance of solidarity, inclusion, non-discrimination and equality.

The Malaysian contingent of 13 people, led by badminton players Lee Zii Jia and Goh Liu Ying carrying the Jalur Gemilang, was the 177th nation to march into the stadium.

The male athletes and officials wore baju melayu complete with the tanjak (headgear), with the design inspired from the attire of the powerful Malay warrior Hang Tuah, who lived in Melaka during the reign of Sultan Mansur Shah in the 15th century.

The female athletes were in their baju kurung, complete with an outer garment and designed to match the attire of the male athletes.

Designed by the Faculty of Art & Design, Universiti Teknologi Mara (UiTM) Shah Alam, the colours of the attire and the geometry patterns were adapted from the Jalur Gemilang, the Malaysian national flag.

Tokyo had previously hosted the Olympics in 1964. The Games will officially end on Aug 8, with Japan passing the baton to France for the 2024 Paris Olympics.

But it wasn’t all smooth sailing as hundreds of protesters, carrying placards that read “Lives over Olympics”, protested around the stadium shouting “Stop the Olympics” earlier in the evening.

The pandemic still looms large, with more than 100 people involved with the Olympics having tested positive so far.-Bernama

Koepka confirms he will play in Ryder Cup

Koepka confirms he will play in Ryder Cup

1.Koepka confirms he will play in Ryder Cup

2.Mid-Autumn festivals around the world

4.‘Mad Max: Fury Road’ vehicles to go under the hammer