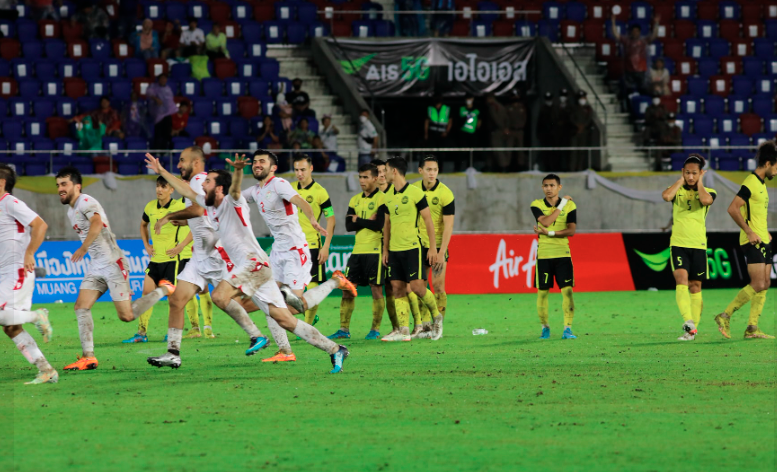 KUALA LUMPUR: Malaysia’s hopes of ending a 44-year wait for glory in the Thailand King’s Cup ended in tatters after losing 3-0 in a penalty shootout to Tajikistan in the final at the 700th Anniversary of Chiang Mai Stadium in Chiang Mai yesterday.

With the score tied at 0-0 after regulation time, Tajikistan goalkeeper Rustam Yatimov emerged as the hero when he saved two shots by Harimau Malaya defender Dion Cools and midfielder Muhammad Nazmi Faiz Mansor.

Malaysia’s third effort by winger Muhammad Safawi Rasid hit the crossbar before substitute Rustam Soirov slotted in the winning goal to allow Tajikistan to lift the Cup for the first time.

Earlier, in the final of the 48th edition of the tournament, national head coach Kim Pan Gon made four changes to the team who edged Thailand 5-3 on penalties on Thursday (Sept 22), including fielding Muhammad Nazmi in place of Muhamad Nor Azam Azih, who was red-carded in that game.

Although Tajikistan, who are coached by Petar Segrt, dominated possession in the early stages, it was world number 148 Malaysia who had the first look at goal, with striker Muhammad Akhyar Rashid’s long-range attempt cleanly gathered by Yatimov in the 10th minute.

A downpour shortly after gave Malaysia a slight advantage as they began to find their rhythm and launch several attacks on the world number 109 Tajikistan team’s goalmouth.

Malaysia’s best chance in the first half fell to Brendan Gan in the 23rd minute but the Australia-born Malaysian header, off a cross from the right by Nazmi Faiz, sailed over the bar.

The match had to be halted for almost three minutes towards the end of the first half when Mohamadou Sumareh overreacted when he was given a yellow card for shoving Tabrez Islomov from the back.

Sumareh can consider himself lucky not to have been sent off in injury time when the referee decided not to book him again despite his overzealous tackle on Ehsoni Panshanbe.

Pan Gon, realising that Sumareh was just one card away from being sent for an early bath, replaced him with nippy winger Faisal Halim at the start of the second half.

Muhammad Safawi had a great chance to put Malaysia ahead but his left-footed curler was saved by Yatimov in the 57th minute before Harimau Malaya custodian Ahmad Syihan Hazmi Mohamed was called into action to palm out a long-range piledriver by Tajikistan’s Muhammadjon Rahimov in the 68th minute.

Malaysia, who seemed to lose focus in the last 10 minutes, can thank their lucky stars when Soirov’s goal in the 84th minute was chalked off for offside and the score stayed 0-0 at full-time, forcing the game to be decided on penalties - which Tajikistan aced and Malaysia failed. - Bernama