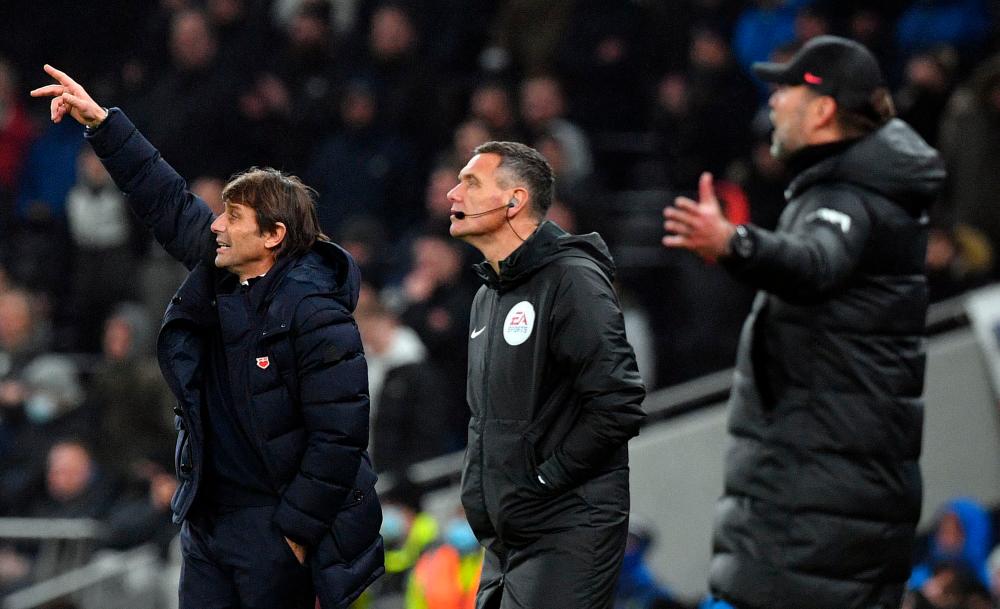 Spurs have a backlog of three Premier League fixtures due to postponements for bad weather and coronavirus outbreaks among the squad, while Liverpool have also been impacted by four positive cases of Covid-19 over the past week.

Six of the scheduled 10 Premier League games last weekend were called off and more are expected in the coming weeks as the authorities have decided to press ahead despite record numbers of positive cases across Britain.

The two-legged semi-finals of last year's League Cup were cut back to one game due to the backlog caused by a late start to the season by the pandemic.

As it stands Liverpool will face Arsenal in the first two midweeks of January with Conte facing his old club Chelsea in the last four.

“I think it would be better with one game absolutely, but obviously what I say is not too important,“ said Klopp, who revealed a Premier League managers’ meeting will take place on Thursday to addrees a series of coronavirus concerns.

“If there are two games, then we will play two games. But it would be helpful if there was only one, true.

“The draw has us at Arsenal, I’m fine with that, we play there and see who is better and go for it.”

Liverpool captain Jordan Henderson said on Wednesday that “nobody really takes player welfare seriously” amid concerns over the number of games being forced upon already stretched squads.

Klopp has consistently campaigned for fewer matches and the return of five substitutions to the Premier League in recent seasons.

But Liverpool were one of six English clubs that attempted to launch a European Super League in April that would have added even more games to the schedule.

“I don’t just speak about player welfare this year, I have been speaking about it for six years or maybe longer,“ added Klopp.

“If the things I say would help more, I would say it much more often. But it doesn’t help.

“The only thing I do with these messages is I create headlines. They never arrive at the right places.”

Tottenham were eliminated from the Europa Conference League earlier this week after a rearranged date for their final group game against Rennes could not be agreed between the clubs.

Spurs had to postpone the fixture, initially scheduled for December 9, due to a Covid outbreak that saw at least eight players and five staff test postive.

“Maybe it would be better to play one game and not two games, especially for the situation we are living but we have to respect the rules,“ said Conte. - AFP