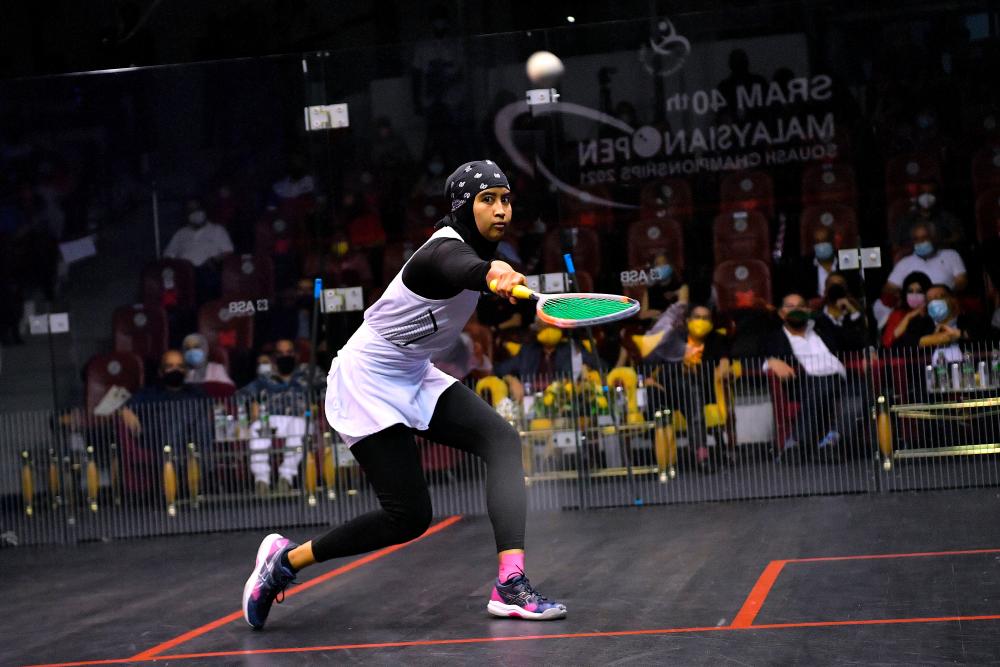 KUALA LUMPUR: Aifa Azman (pix) came into the 2021 Malaysian Open squash championships as a wild card entrant. Today, she walked out of the court crowned champion after stunning top seed Salma Hany of Egypt 12-10, 11-8, 11-4 in the final.

It has certainly been a fairytale journey for the young Kedahan, who will only turn 20 on Dec 18.

World number eight Hany showed her class to dominate the early stages of the first game for a 9-4 lead before the undaunted Aifa fought back to draw level at 9-9 and, eventually, win it 12-10.

With her confidence boosted, world number 69 Aifa continued from where she left off to take the second game 11-8 despite some nervy moments towards the end.

A jubilant Aifa admitted that her game plan in the final against Hany did not produce the desired result in the early stages of the first game before she found the momentum and kept focusing on her performance to clinch the title.

“It’s really amazing to win the title today because I am just a wildcard entrant and, what’s more interesting, is that I am extremely happy to have seen off one of the top players in the world today,” she told reporters.

In the meantime, she would focus on helping her teammates in the Asian Team Championships, which will be held at the same venue - the National Squash Centre in Bukit Jalil - from Tuesday (Nov 30-Dec 4).

Meanwhile, there was heartbreak for Colombian top seed Miguel Rodriguez, who went down 7-11, 8-11, 11-13 to second seed and world number 15 Saurav Ghosal of India in the men’s final.

Ghosal described his 55-minute win today as “special” because he regards the world number 12 Rodriguez as one of the toughest and most clinical players he has ever met in his career, so far.

“It was a really hard match. Rodriguez is a top-quality player, very good and solid throughout the tournament. I knew I had to be really good today to compete with him. I also had a plan in place and tried to execute it as much as I could. I am glad to have sealed a title today,” said the India player.

Ghosal also dedicated the win to his former coach, the late Malcolm Willstrop, who passed away in May, “as he was responsible in moulding me to be where I am today”.

The Malaysian Open champions in both categories each received a cash prize of US$50,000 (about RM200,000) and a trophy. — Bernama 3.Traders should reduce food prices in tandem with drop in prices of goods: Annuar

4.MoU on Cambodian domestic helpers expected to be signed in September: Saravanan