Maradona tributes the backdrop as Napoli aim to bounce back 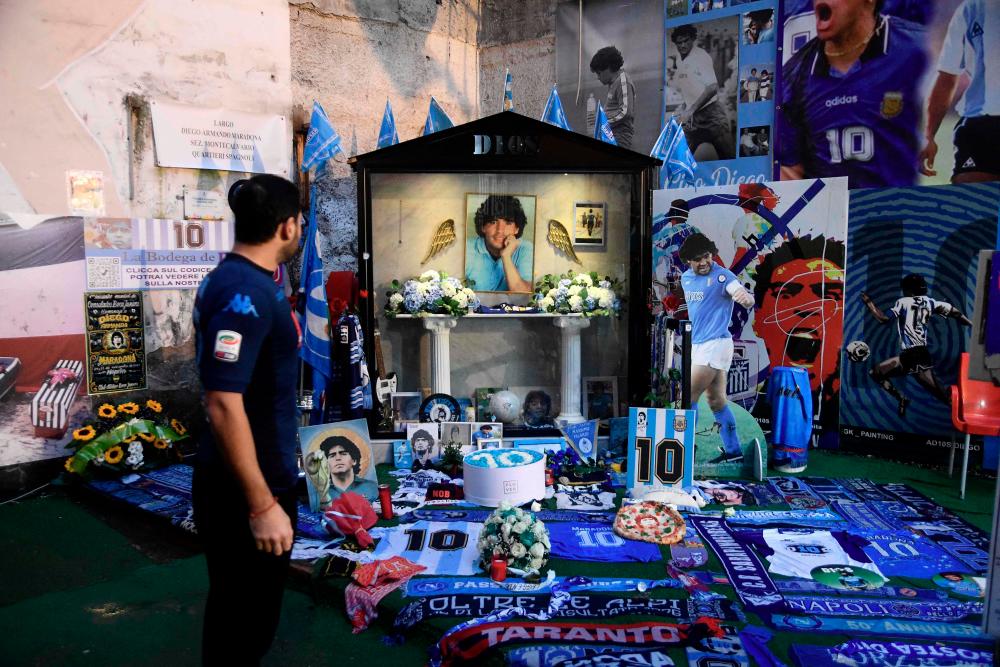 Pictures of late Argentinian soccer player Diego Armando Maradona are displayed among fans items in the Spanish district of Naples on November 25, 2021. -AFPPIX

MILAN: Napoli will pay tribute to Diego Maradona on Sunday when they host Lazio hoping to put two painful and costly consecutive defeats behind them.

The football world honoured Maradona on the anniversary of his death on Thursday but Napoli are using this weekend’s fixture to enable Neapolitans to finally say goodbye at the place where their icon was most at home.

On Thursday Napoli told supporters to arrive at the Stadio Diego Armando Maradona over three hours early so they could be in the stands for an “intense” commemoration ceremony dedicated to the man who led a previously mediocre team to their only two Serie A titles and the 1989 UEFA Cup.

Now Napoli fans will be able to collectively express their love for Maradona in the stadium where he weaved magic at the peak of his career, after being locked out by Covid-19 a year ago.

“You see a sticker in a car, or a mural, or a kid on the street who has a top with Maradona written on the back, and that fills me with pride because he gave the people of my city unending joy.”

Napoli will be hoping for a boost from the pre-match events as they take on Lazio off the back of losses at Inter Milan and Spartak Moscow.

The 3-2 defeat at the San Siro last weekend was Napoli’s first of the league season, cut the gap between the league leaders and champions Inter to four points and cost them their star striker Victor Osimhen.

Osimhen is expected to be out of action for three months after fracturing his left cheek and eye socket in a sickening clash of heads with Milan Skriniar.

To make matters worse their hopes of making the Europa League knockouts are still in the balance following a fraught 2-1 defeat in Moscow on Wednesday.

Napoli’s bid to maintain their Serie A lead has also been hit by the absence of Andre-Frank Zambo Anguissa, who has been a revelation in midfield since arriving in the summer on loan from Fulham.

AC Milan, who are level on 32 points with Napoli and on a high after their win at Atletico Madrid on Wednesday night, host Sassuolo with coach Stefano Pioli set to sign an extension to his contract which will keep him at the club until the summer of 2023.

Juventus meanwhile travel to high-flying Atalanta still reeling from their 4-0 demolition at Chelsea, four points behind their opponents who sit in the final Champions league spot. -AFP