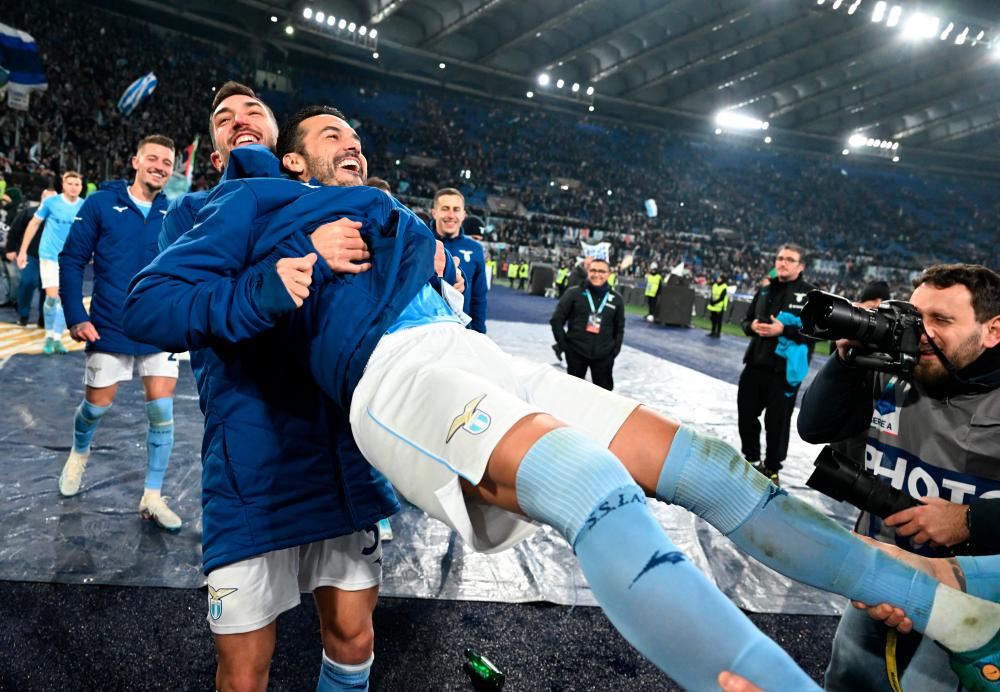 Lazio's Pedro celebrates after the match/REUTERSPIX

ROME: Lazio humbled AC Milan with a superb 4-0 home victory in Serie A on Tuesday, extending the champions’ winless run to five games in all competitions.

Sergej Milinkovic-Savic, Mattia Zaccagni, Luis Alberto and Felipe Anderson were all on target to send Maurizio Sarri’s side into the third place, one point behind Milan and 13 off the leaders Napoli.

Milan continued their recent poor form after they were hammered 3-0 by rivals Inter Milan to lose the Italian Supercup last Wednesday, and crashed out of the Coppa Italia in the last 16 against 10-man Torino the week before.

Milinkovic-Savic fired Lazio in front after four minutes with a low shot into the bottom-left corner after Zaccagni set him up with a cross into the middle of the box.

Anderson could have added a second in the 36th minute but the pass he received from Pedro just in front goal was slightly too powerful for the Brazilian to convert.

However, Zaccagni doubled Lazio’s lead two minutes later, after midfielder Adam Marusic hit the post from the edge of the six-yard box for the Italian to follow up with a tap-in from close range.

Milan had a chance to pull one back four minutes into the second half, but midfielder Ismael Bennacer sent his powerful free kick inches wide of the right post.

Lazio, who were without injured striker Ciro Immobile, who has seven goals in Serie A this season, made it 3-0 from the spot through Luis Alberto, after they were awarded a penalty for a foul by Pierre Kalulu on Spaniard Pedro.

Anderson wrapped up the scoring for Lazio in the 75th minute calmly converting Luis Alberto’s precise cross from the edge the box for his sixth Serie A goal this season, and fourth in consecutive games in all competitions.

Lazio host 11th-placed Fiorentina on Sunday when Milan host Sassuolo, who are one spot above the relegation zone. - Reuters