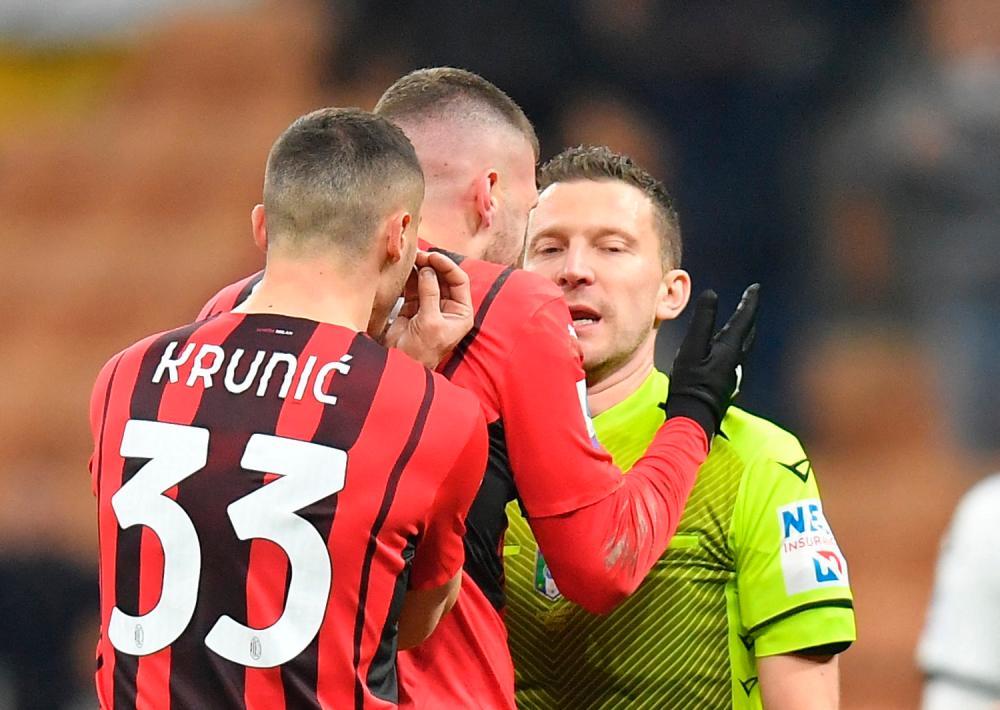 ROME: AC Milan hoped to return to the summit of Serie A on Monday, but a day later their title challenge lies at a crossroads after a refereeing error cost them dearly in a shock defeat by Spezia.

The Rossoneri thought they had clinched the three points necessary to climb above Inter Milan into first place when Junior Messias swept home a shot in stoppage time at San Siro.

But the Brazilian winger and his team mates were soon left incredulous, as referee Marco Serra had already blown his whistle to award Milan a foul on the edge of the area.

Barely two seconds passed between the foul and the shot, but no advantage was played, and the score remained 1-1 – that is, until Spezia stormed up the other end to score a 96th-minute winner.

It was an extraordinary ending to a game in which Milan had missed a penalty, taken and surrendered the lead, and failed to find a way past inspired goalkeeper Ivan Provedel.

“We know we suffered an injustice. It’s a shame, the responsibility is ours for the goal we conceded but that must be shared with the referee,“ Pioli said.

He added: “The referee has apologised. I am sorry for the man, he immediately apologised and put his hands up because he realised he had got it wrong.”

Italian media reports said that the Italian Referees' Association (AIA) also issued an apology for Serra's mistake, and the 39-year-old, who was left in tears, could now face a lengthy suspension.

Milan must now shake off their feeling of hardship and re-focus for what could be the make-or-break moment of their season.

The Rossoneri host fifth-placed Juventus on Sunday night, with Massimiliano Allegri's side heading to Milan on an eight-match unbeaten league run.

After that is the Milan derby against Inter.

The champions currently have a two-point lead and a game in hand over their rivals, so a Milan victory would be crucial to Pioli's hopes of pipping their neighbours to the league crown.

The timing of the two big games does not look ideal for Milan, who are missing key players like Fikayo Tomori and Franck Kessie through injury and Africa Cup of Nations duties respectively.

But Pioli does not see it that way.

“The Inter and Juve games are coming at the right moment,“ he insisted.

“After an evening like this, it is better to have matches this motivating, where we can show we have grown a lot mentally and with our character.”

With the title race between the two rivals looking likely to go the distance, and Napoli just two points behind Milan in third, the Rossoneri will hope they won't live to regret Serra's impatient whistling too much come the end of an absorbing campaign. - Reuters