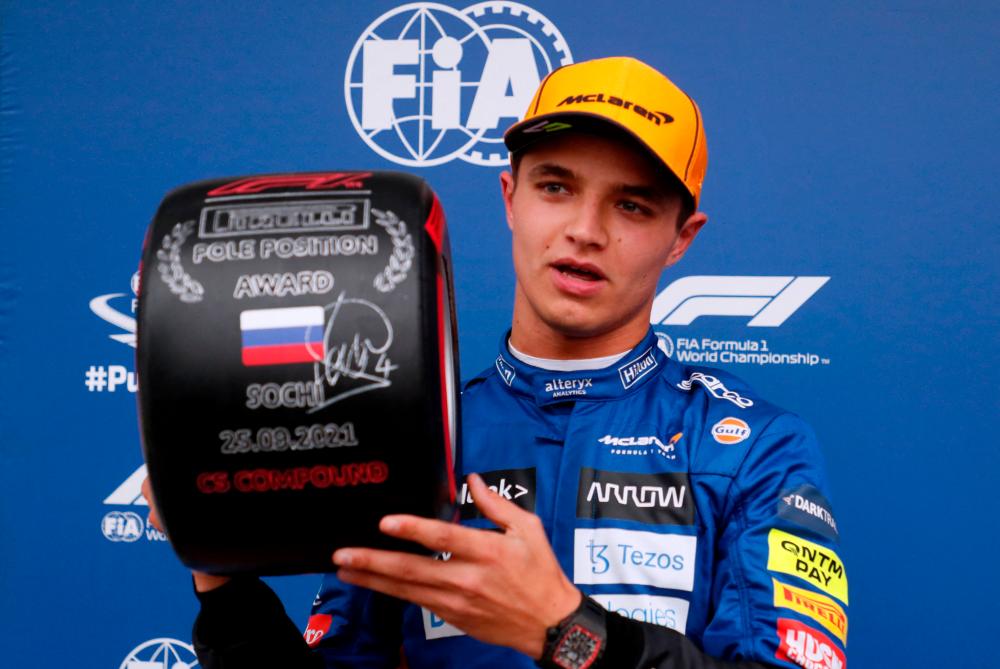 SOCHI: McLaren’s Lando Norris said he was devastated to have the prospect of a first Formula One win slip through his fingers after being caught out by the rain in Russia on Sunday.

The 21-year-old Briton had started on pole for the first time in Sochi, set the fastest lap of the race and still led when it started to rain in the closing laps.

He opted to stay out when the team asked him whether he wanted to pit for intermediate tyres, a decision that turned out to be the wrong call and left him defenceless on a slippery track.

Eventually pitting, after losing the lead to Mercedes’ race winner Lewis Hamilton with three laps to go, Norris wound up seventh and collected a reprimand from stewards for a breach of the pit lane rules.

“It’s a tough one to take. We made the call and we stick by that, even now. At the time we thought it was the best. I know it was the wrong one at the end of the day but that’s hindsight.

“The team told me what was going on and I made the decision, I said I want to stay out. It’s not the team’s fault.”

While Norris stayed out, Hamilton pitted and swiftly made up the 25 second deficit.

Hamilton broke off a television interview to tell his compatriot that he had not wanted to pit either and had followed team instructions to do so only reluctantly.

Friends and long-time rivals George Russell and Charles Leclerc said they knew from experience what he was going through and also offered support.

“He’s part of the decision process in those types of situations and he might feel very guilty,” said Leclerc, who missed out on what would have been his first win in Bahrain in 2019 when he suffered a mechanical problem with 11 laps to go.

“But he’s an amazing driver. He has shown it very often this season,” continued the Monegasque, now a two times race winner for Ferrari.

“It’s just a matter of time before his first win. So I don’t think he should feel so down after the race he has done.”

Russell, who led in Bahrain last year as a stand-in for Hamilton at Mercedes but ended up ninth with fastest lap after the team bodged a pitstop and he then suffered a puncture, agreed.

“It’s every driver’s worst nightmare leading a race and the rain starts coming down. I feel really bad for him,” said the Williams driver, who started third and finished 10th on Sunday.

“I think I’ve been there last year. I know how it feels. He’ll have plenty more victories to come.” – Reuters

4.Treat differences as an advantage in dealing with economic, health crises — PM