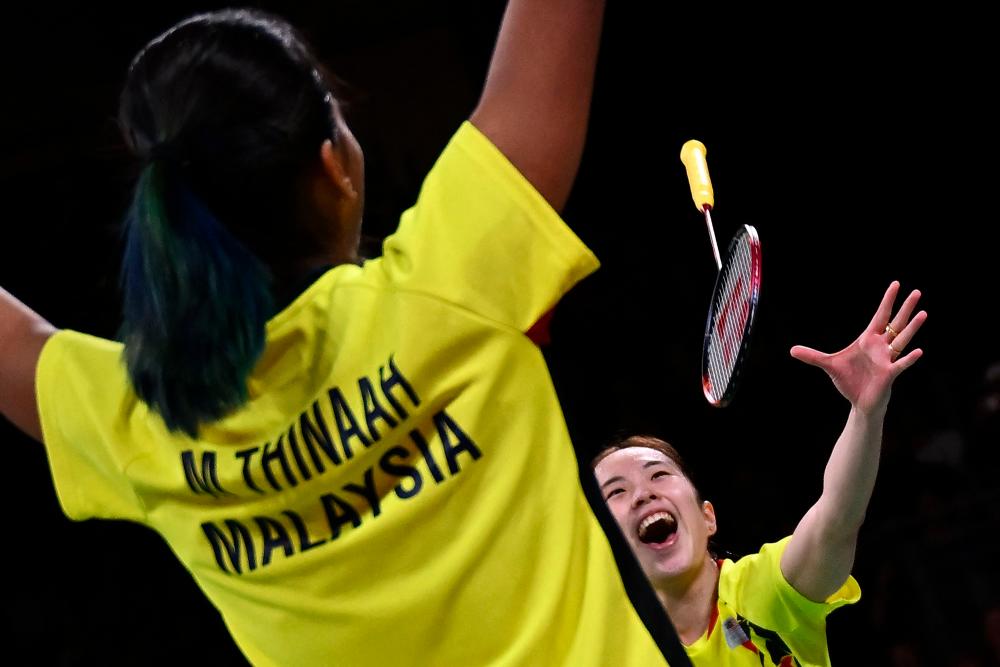 BIRMINGHAM: What a perfect way it was to end Malaysia’s challenge in the Birmingham 2022 Commonwealth Games.

National number one women’s doubles pair Pearly Tan-M. Thinaah stole the show on the final day of the Games as they trounced England’s Chloe Birch-Lauren Smith 21-5, 21-8 to deliver the seventh gold for the national contingent here today.

The deafening cheers from the home crowd in the National Exhibition Centre Hall 5 did nothing to rattle Games debutants Pearly-Thinaah as they were simply in their element in the opening game to outplay the English duo 21-5.

Inspired, Pearly-Thinaah continued their crackling performance, including a delicate back-hand return by Thinaah and a flurry of fiery smashes, to rake up the points and seal the gold medal with a 21-8 win in just 33 minutes.

The world number 11 Malaysians then punched the air in delight before going over to hug Badminton Association of Malaysia (BAM) doubles coaching director Rexy Mainaky to celebrate their first ever individual gold in the Games.

Thanks to the heroics of Pearly-Thinaah, Malaysia have now surpassed their six-gold target for Birmingham 2022, thus equalling the seven-gold achievement at the 2018 edition in Gold Coast, Australia.

Apart from Pearly-Thinaah’s gold and Tze Yong’s silver today, the national badminton squad had won their first gold with a 3-1 win over India in the mixed team final on Tuesday (Aug 2).

As such, the national contingent capped their Birmingham 2022 campaign with seven golds, eight silvers and eight bronzes.

The closing ceremony of the 22nd edition of the Commonwealth Games will be held at the Alexander Stadium, Perry Barr, here, at 8 pm local time (3 am Aug 9 Malaysian time). - Bernama