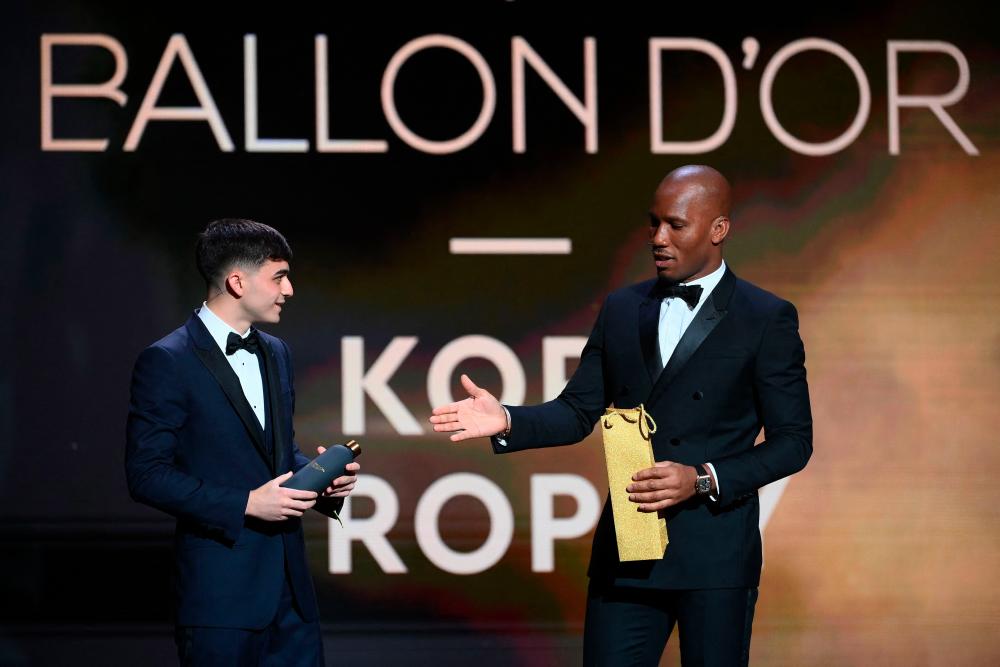 FC Barcelona's Spanish midfielder Pedri (L) receives a thermos as a present from Ivorian and host Didier Drogba during the 2021 Ballon d'Or award ceremony at the Theatre du Chatelet in Paris on November 29, 2021. -AFPpix

PARIS: Barcelona and Spain starlet Pedri won the Kopa Trophy for the best player aged under 21 at the Ballon d’Or awards ceremony in Paris on Monday.

The midfielder, who only turned 19 last Thursday, was a key player for Spain as they reached the semi-finals of the European Championship and featured in their side that lost in the men’s Olympic football final against Brazil in Tokyo.

In addition he played 52 games for Barcelona, helping them win the Copa del Rey.

Pedri, who joined Barca from Las Palmas last year, recently extended his contract at the Camp Nou to 2026.

The Kopa Trophy is named after Raymond Kopa, the Real Madrid and France star of the post-war era who won the Ballon d’Or in 1958.

France forward Kylian Mbappe was the inaugural winner of the prize in 2018, and Matthijs de Ligt of Juventus and the Netherlands won it in 2019.

There was no Ballon d’Or awards ceremony last year because of the coronavirus pandemic. -AFP