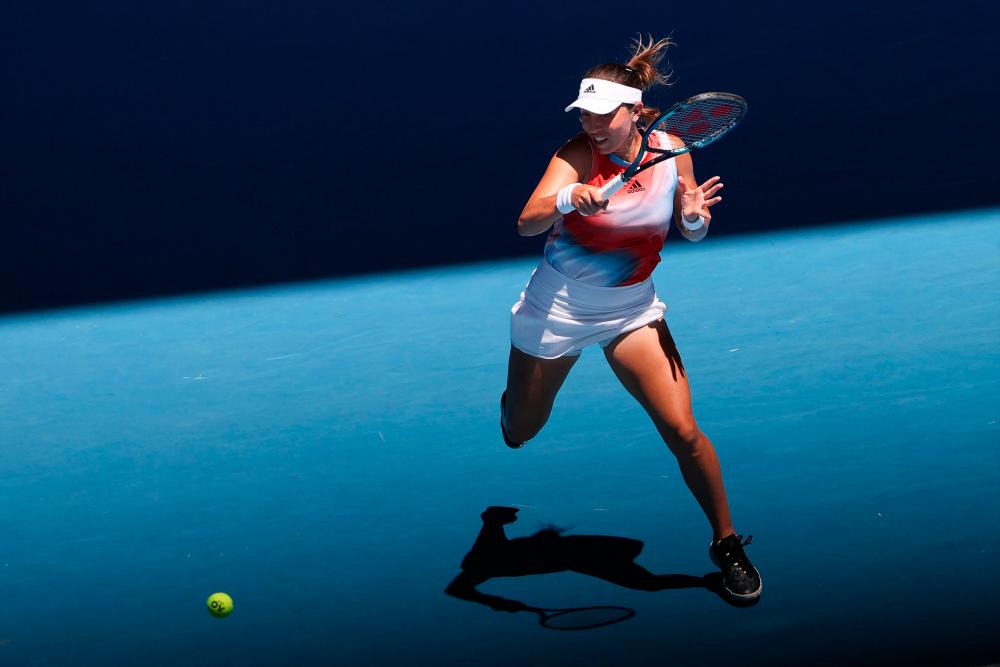 Jessica Pegula of the US hits a return against Greece’s Maria Sakkari during their women’s singles match on day seven of the Australian Open tennis tournament in Melbourne on January 23, 2022. AFPPIX

The 21st seed stormed through a first-set tiebreaker and kept her foot to the gas in overpowering the Greek 7-6 (7/0), 6-3 on Margaret Court Arena.

She will play either world number one and title favourite Ashleigh Barty or Naomi Osaka's conqueror Amanda Anisimova for a place on the semi-finals.

“That was definitely my best match of the year,“ said Pegula, who has been relaxing in Melbourne by playing Blackjack at a local casino.

“I thought I returned really well, I wanted to put pressure on her serve and I felt I did that. I was trying to be patient and play as smart as I could.”

The 27-year-old Pegula, whose billionaire father Terry owns the Buffalo Bills NFL club, also made the last eight in 2021, when she lost to fellow American Jennifer Brady.

Right-hander Sakkari, who made the semis at both the US Open and French Open last year, had a 2-0 win-loss record over Pegula and had not dropped a set at Melbourne Park.

But she found the going tough in searing heat.

They traded blows throughout the first set until the tiebreak when Pegula found another gear with her flat and fast groundstrokes helping her race through it without dropping a point.

She earned a break in the second set to move 4-1 and held on to take the win when Sakkari slapped a backhand wide. - AFP