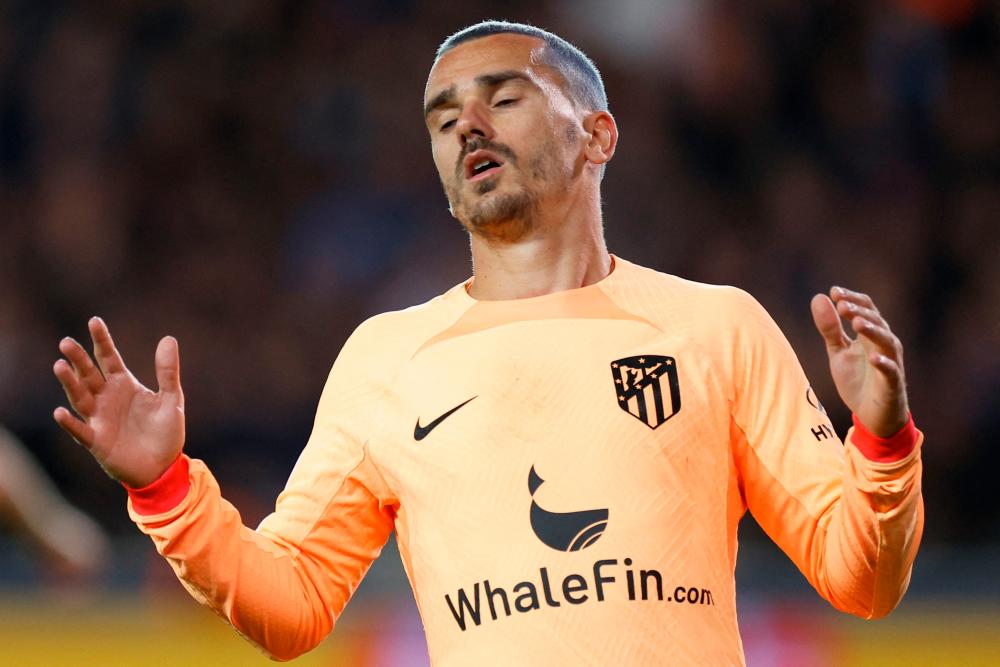 The Belgian side have won their three opening games without conceding a goal and dominated Diego Simeone's side for much of the game, triumphing thanks to Kamal Sowah and Ferran Jutgla's strikes.

Antoine Griezmann, given a rare start, missed a second-half penalty for Atletico, who are level with Porto and Bayer Leverkusen on three points each, after the German side lost 2-0 in Portugal.

“They did well in attack but it’s clear that we have to improve in (defence),“ said Atletico coach Simeone.

“The good thing is that it is up to us, but we have to correct it as soon as possible because this competition does not allow you to make mistakes.”

Alvaro Morata should have sent Atletico ahead after breaking into the box but former Liverpool goalkeeper Simon Mignolet saved his low strike after a tight opening spell.

Brugge should have doubled their lead at the start of the second half but Jan Oblak made a fine save to deny Jutgla, after fine work by Canadian Tajon Buchanan, with Atletico's defence sleeping on the job.

Yannick Carrasco lashed an effort well wide and Griezmann sent a shot into the side-netting as the visitors reacted to the wake-up call.

However the effervescent Buchanan teed up Jutgla to finish with aplomb in the 62nd minute. The 23-year-old striker is in a rich vein of form -- this was his eighth goal in 11 games across all competitions.

Griezmann crashed a penalty off the crossbar after Matheus Cunha was felled in the box, then had a goal ruled out for offside as Atletico's frustration grew.

Mignolet beat away Joao Felix and Angel Correa efforts in the final stages to secure a noteworthy victory for his team, and leave the 2014 and 2016 runners-up with a lot of work to do.

“It’s a very tight group and we will have to fight because we won’t get anything for free,“ Atletico captain Koke warned.

“We had chances in the first half, then the second and then the penalty. They were stronger in the penalty areas.” - AFP