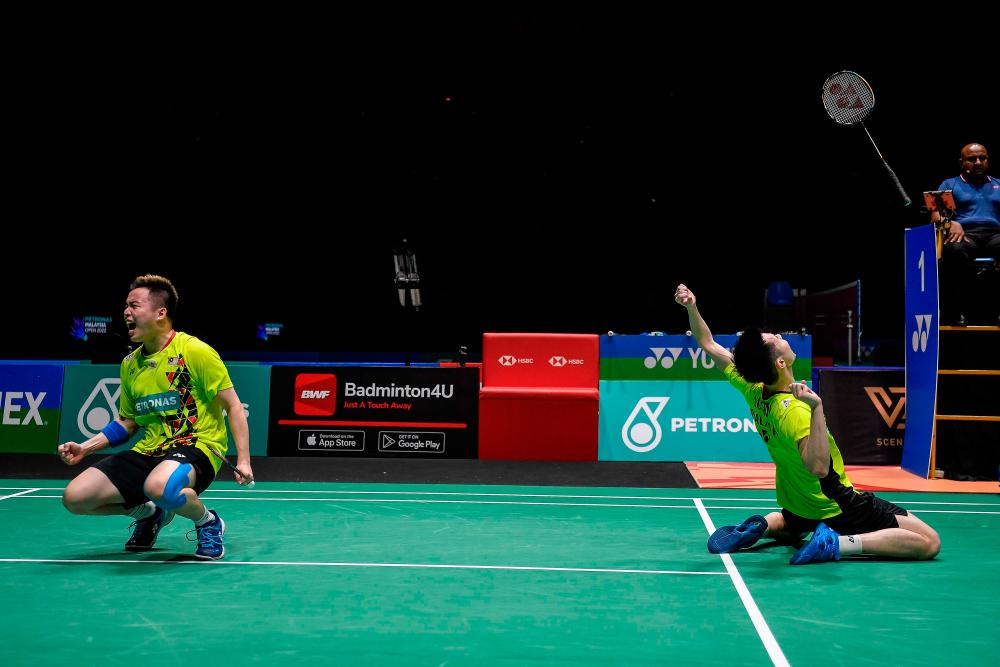 Buoyed by the overwhelming support from the home fans in Axiata Arena, Aaron-Wooi Yik, seeded fifth, were indeed in red-hot form throughout the first set as they sealed a comfortable 21-13 victory.

However, the luck was not on Aaron-Wooi Yik’s side as a number of unforced errors handed a lifeline to the Indonesian pair, seeded third, as ‘The Daddies’ got back into the game with a narrow 22-20 win.

The fans were treated with another tight contest in the decider, but Aaron-Wooi Yik, ranked sixth best in the world, kept their cool to wrap up the tie, 21-19, which brought cheers to the home fans.

The result meant Aaron-Wooi Yik earned two straight wins over Ahsan-Hendra since they defeated them to clinch bronze in Tokyo 2020 last year but the Indonesian still maintained the lead in a 7-3 head-to-head record.

Meanwhile, Aaron said it has always been a close contest against Ahsan-Hendra but was glad to survive the stern test against the current world number three combination.

“It is not easy to beat them as they also took easy points from us but the fans gave us the advantage,” he told reporters after the match.

However, it was the end of the road for Malaysian professional duo, Ong Yew Sin-Teo Ee Yi as they were toothless against another Indonesian pair, Fajar Alfian-Muhammad Rian Ardianto.

In the meantime, Yew Sin admitted they allowed their opponents to check their rhythm which destroyed their chance to enter the last four, today.

Ee Yi, on the other hand, rated their performance in this tournament as six over 10 and vowed to focus on their challenge in Malaysia Masters, next week.

The last time a home pair reached the semi-finals of the tournament was in the 2014 edition through Goh V Shem-Lim Khim Wah, who eventually emerged as champions after beating China’s Chai Biao-Hong Wei, 21-19, 21-18. — Bernama