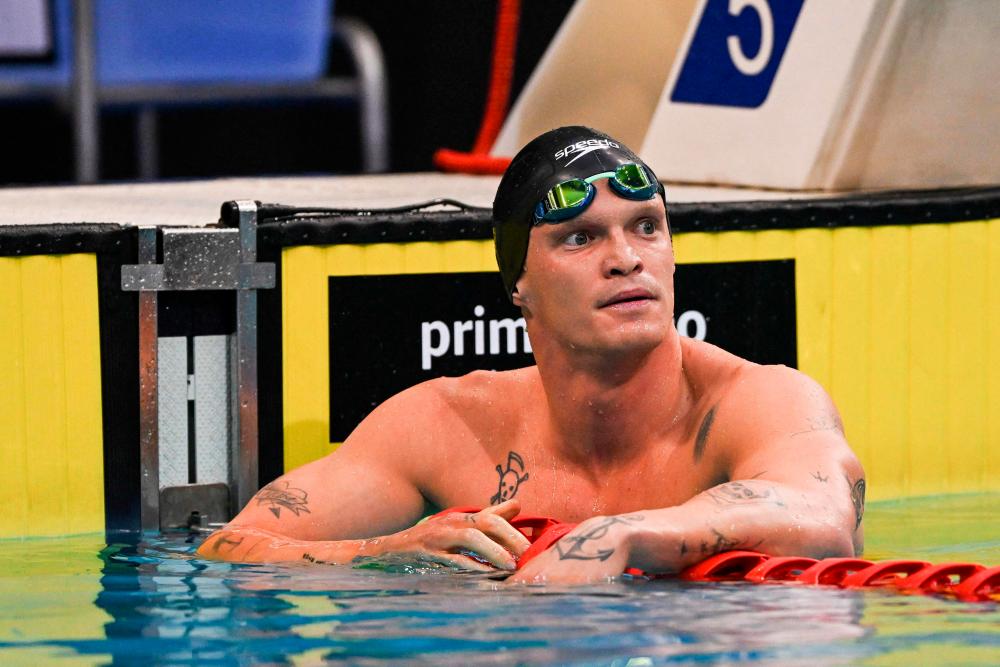 Australia’s Cody Simpson reacts after coming third in the men’s 100 metre butterfly final on day 1 of the 2022 Australian Swimming Championships in Adelaide on May 18, 2022. AFPPIX

Simpson, a talented junior swimmer who put his music career on hold to return to the sport in 2020, clocked 51.96 secs to come third in the 100m butterfly on day one of the Australian Swimming Championships in Adelaide.

Matt Temple (51.50) and Kyle Chalmers (51.67) took the top two spots, which qualify for the world titles in Budapest next month.

But former Olympic 100m freestyle champion Chalmers is set to give Hungary a miss, opening the door for Simpson whose time was within the FINA cut-off.

The top three qualify for the Commonwealth Games in Birmingham in late July.

“That’s a dream come true. I had a great swim this morning and so much progress since last year,“ said Simpson, who has made three albums, toured the world, worked with Justin Bieber and publicly dated celebrities Miley Cyrus and Gigi Hadid.

“I didn’t even think I’d be remotely competitive until this year at the earliest, so to make the team is just a bonus on the way to Paris (Olympics in 2024).”

With Tokyo Olympic 100m freestyle winner Emma McKeon skipping the Australian championships and the worlds, fast-rising 18-year-old Mollie O'Callaghan took up the mantle with a sizzling 52.49 to clock the quickest time of the year.

She beat Shanya Jack (52.60), who is in her first meet since a four-year doping ban was reduced to two years on appeal.

Jack, who was part of Australia's 4x100m team that set a world record in 2018, tested positive for muscle growth agent ligandrol in an out-of-competition test in June 2019.

She always claimed innocence, arguing she did not intentionally consume the prohibited substance.

Ariarne Titmus, who stunned American great Katie Ledecky to take the 200m and 400m gold in Tokyo, is racing both those events in Adelaide, but also opted to compete in the 100m, finishing fifth.

Titmus is skipping the worlds but will compete in the Commonwealth Games.

Australia has long had huge depth in the 100 free, and seven of the eight finalists swam under the FINA-qualifying time for the world titles.

Elijah Winnington, a hot favourite for Tokyo 400m freestyle gold only to miss out on the medals, booked his place in Budapest with a red-hot 3:43.10 -- a time that would have won the Olympic title.

Mack Horton, the 2016 Olympic champion who missed out on selection for Tokyo, was second to ensure he also qualified. Product updates for ‘The Boss’

1.One dead as rare tornado tears through Dutch city

4.Spain moves to widen medical use of cannabis

5.Product updates for ‘The Boss’