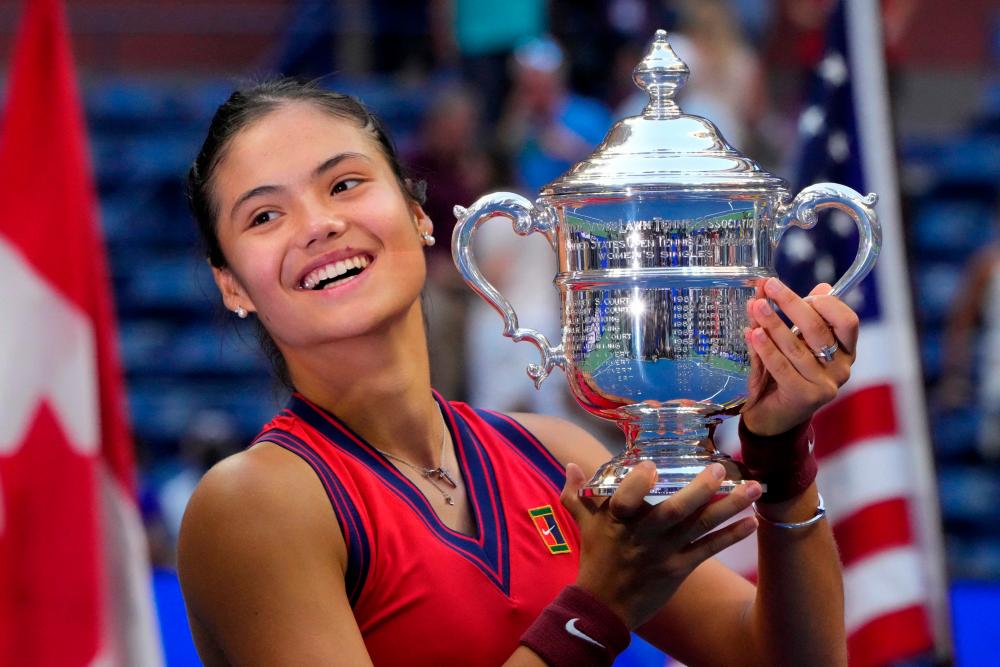 Raducanu celebrates with the trophy after winning the 2021 US Open Tennis tournament women’s final match against Fernandez at the USTA Billie Jean King National Tennis Center in New York. – AFPPIX

NEW YORK: British teenager Emma Raducanu, who stunned the tennis world with her improbable US Open success, said on Monday during a whirlwind media tour that her accomplishment not only took her by surprise but also satisfied her hard-to-please parents.

The 18-year-old beat Canada’s Leylah Fernandez, 19, on Saturday to become the first qualifier to win a Grand Slam title after a fairytale run she never dreamed was possible when she arrived in New York.

Raducanu, whose appearance at the US Open marked only the second Grand Slam tournament of her career, won 10 consecutive matches at Flushing Meadows – including three in qualifying just to reach the main draw – without dropping a set.

The triumph, which vaulted Raducanu 127 spots up the world rankings to No. 23, also went a long way when it came to pleasing her Chinese mother Renee and Romanian father Ian.

“They were pretty tough on me when I was young but they kind of showed the way and I think now it’s helping on the biggest stages in the world,” Raducanu said during an appearance on the ABC News “Good Morning America” programme.

“It was really nice to talk to them after I won. They were just so happy and proud of me and they are my toughest critics and very, very hard to please but I got them with this one.”

The teenager posted a photo on her Instagram account on Monday showing her on the New York City streets with a big smile motioning toward a Nike add depicting herself celebrating.

Raducanu, who can count Britain’s Queen Elizabeth and tennis greats Martina Navratilova and Billie Jean King among those who congratulated her after the win, said she will not let her US Open trophy out of sight on her flight home.

“That’s coming with me right by my side. I’m not trusting it in any sort of other luggage that I’m getting checked in. I can’t believe I get to bring it home,” Raducanu said on “Today”.

“And I got to see my name engraved on the wall with the past champions and I thought that was pretty special to be on the same board as them.” – Reuters