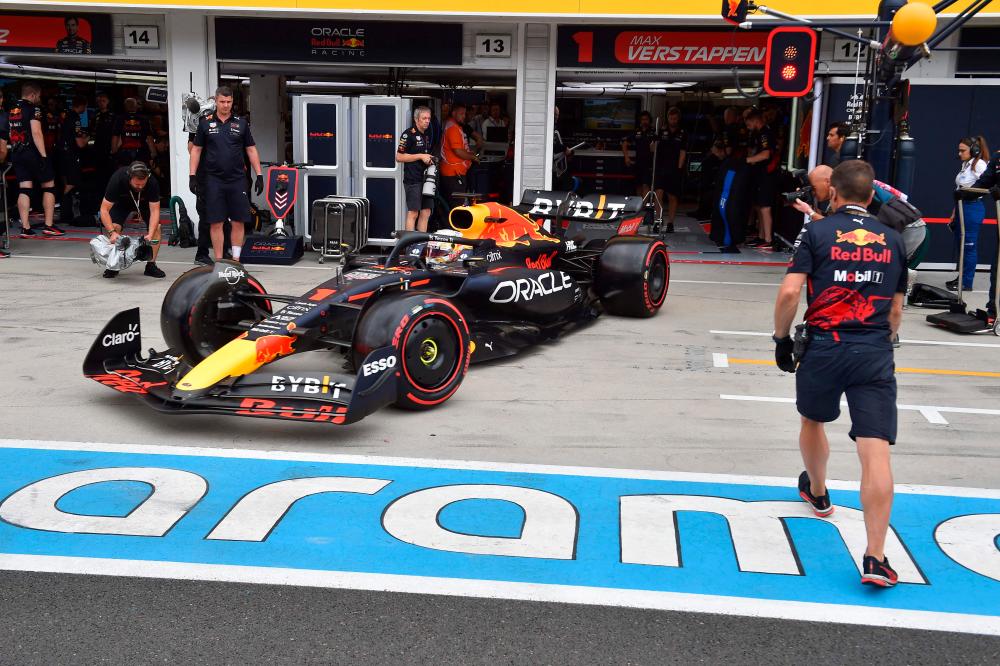 Red Bull Racing’s Dutch driver Max Verstappen leaves the pits for the qualifying session ahead of the Formula One Hungarian Grand Prix at the Hungaroring in Mogyorod near Budapest, Hungary, on July 30, 2022. AFPPIX

Speaking to a news conference at the Hungarian Grand Prix, Horner was careful with his choice of words as he fielded reporters' questions on the proposed deal, which it has been claimed will see Porsche buy a 50 per cent stake in the Formula One team and become engine-suppliers.

“And I think it’s great that a company like Porsche, and Audi, are looking at seriously coming into Formula One.

“But there’s some major caveats that we need to get past first, before things can get anywhere near progression, and that primarily focuses on what the final technical, sporting and financial regulations for the power unit are going to be.

“Are they going to be fair and equitable to the newcomers versus the current incumbents?

“So that is the first piece of the jigsaw that needs to be completed and it’s something that I know the FIA are working hard on. And hopefully in the coming weeks, we’ll get to see that.”

He said that with much to discuss it was “going to be a reasonably lengthy process” but that the fundamental issue remained “what are those regulations for 2026?”.

Formula One is set to introduce a new set of regulations for engines from 2026, which would mean a long-term commitment is necessary from any new entrant arriving as an engine-supplier.

“Anything that we look at is very much with the long-term in mind,“ Horner added. “We’re not looking at a short-term solution.

“Strategically, it would have to fit obviously within the long-term plans that Red Bull have for its commitment in F1.” - AFP