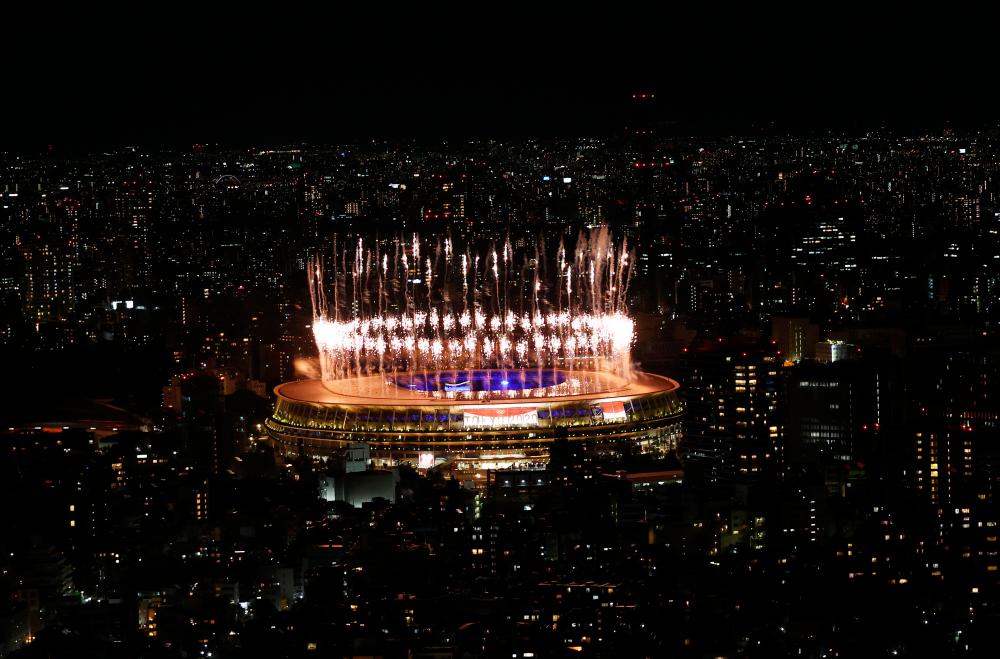 Fireworks are seen from outside the stadium during the closing ceremony from the Shibuya Sky observation deck. REUTERSPIX

TOKYO: After more than two weeks of awesome sporting action, the 2020 Tokyo Olympics came to a spectacular conclusion as the fire in the cauldron was extinguished at the Tokyo Olympic Stadium tonight and Tokyo passed the baton to 2024 host city - Paris.

Held in a new normal, with a lot of restrictions and strict procedures amidst the Covid-19 pandemic, which had forced the Games to be delayed for a year, the curtain finally came down on the Tokyo Olympics in a vibrant but less formal setting during the closing ceremony that was held sans spectators.

Even the number of athletes at the ceremony was lower compared to previous Games as athletes had to leave the country within 48 hours of their events’ conclusion.

Tokyo itself was under a state of emergency due to the virus outbreak, with no spectators allowed at almost all venues in the Games, which was participated by over 10,000 athletes representing 206 teams, including a Refugee Olympic Team.

Australian swimmer Emma McKeon emerged as the highest medal winner - seven - while fellow swimmer Caeleb Dressel of the United States ended up as the athlete with the most gold medals - five.

Japan’s Momiji Nishiya, who won the women’s street skateboarding event aged 13 years and 330 days, ended the Tokyo Olympics as the youngest gold medallist - and second youngest in the Games’ history after American diver Marjorie Gestring (13 years and 267 days), who became the youngest winner at the 1936 Berlin Games.

The Tokyo Olympics also saw zero in-competition doping cases found, although a number of athletes were provisionally suspended and barred from the Games through pre-competition testing.

The closing ceremony started with the athletes’ parade into the stadium, followed by cultural, musical and fireworks displays.

National diving ace Pandelela Rinong carried the Jalur Gemilang as all the athletes walked into the stadium from four different entrances, waving their countries’ mini flags and dancing and jumping - giving the ceremony an air of informality.

After more cultural shows, dances and songs, it was time for the Governor of Tokyo Koike Yuriko to hand over the Olympic flag to International Olympic Committee (IOC) president Thomas Bach, who then handed it over to the Mayor of Paris, Anne Hidalgo.

Paris then took centre stage to showcase what it had to offer when the Games are held in 2024.

Thousands were seen gathered near the Eiffel Tower and rejoiced after the handing over.

Paris then entertained the crowd in Tokyo via live stream to a series of musical performances and an airshow.

The Olympics will be returning to France after 100 years as Paris had previously hosted the Games in 1900 and 1924.

The Japanese capital will next host the Paralympics from Aug 24-Sept 5.

Malaysia, having won a silver through track cyclist Mohd Azizulhasni Awang in men’s keirin and bronze through shuttlers Aaron Chia-Soh Wooi Yik in men’s doubles, ended their campaign in the 74th spot.

Malaysia had 30 athletes at the Tokyo Games. — Bernama