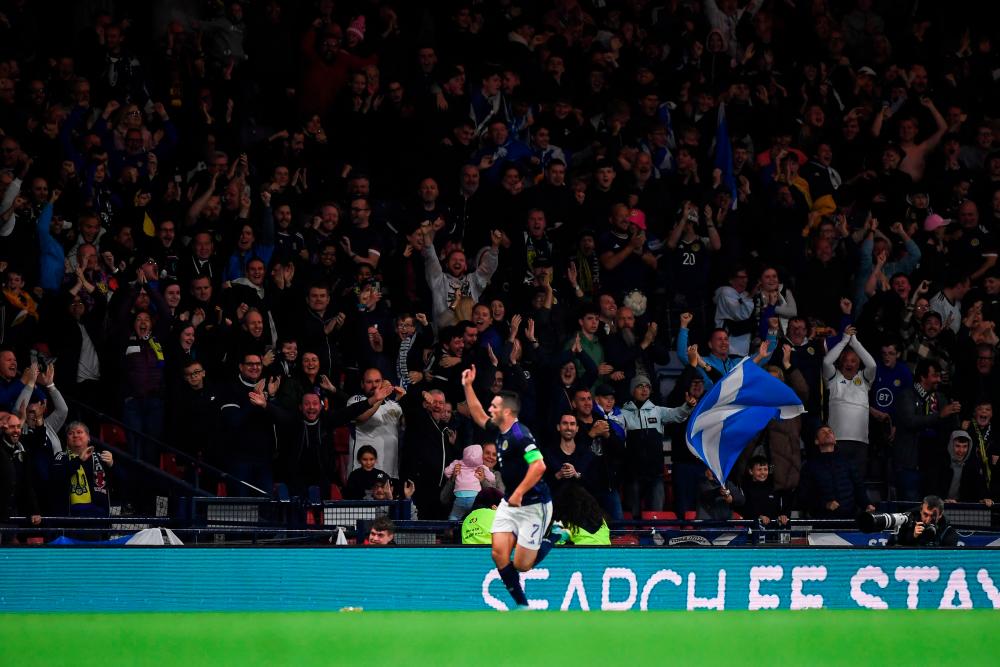 GLASGOW: Scotland boosted their bid for Nations League promotion and gained a measure of revenge over Ukraine with a 3-0 win in Glasgow today.

Steve Clarke’s side dominated a one-sided clash at Hampden Park but had to wait until the last 20 minutes for their goals as John McGinn’s opener and Lyndon Dykes’ brace sent them top of Group B1.

Scotland were beaten 3-1 by Ukraine in an emotionally-charged World Cup playoff at Hampden Park in June.

Their failure to qualify for a first World Cup since 1998 still hurts Clarke’s players, so this was a cathartic result, albeit one they would rather have had four months ago.

Ukraine’s hopes of providing a rare moment of levity in their war-torn nation by reaching the World Cup were eventually dashed as they lost to Wales in the playoff final.

A shadow of the team that beat Scotland in the playoffs, Ukraine provided little resistance as Scotland made it three wins from their four Nations League matches.

The Scots have moved above Ukraine to the top of the group as they chase promotion to League A.

While the competition is derided by some, Scotland are well aware of the Nations League’s importance after securing a Euro 2020 playoff through winning their Nations League group.

In their final group games, Scotland host the Republic of Ireland on Saturday before travelling to Ukraine on Sept 27.

“I’m pleased for the players. They suffered in the summer more than anybody,” Clarke said.

“We did a lot of work in the short period we had, a lot of it very boring work in the lecture room, and they obviously took it all on board. They were excellent.

“Sometimes you need to respond in football and it’s nice that we’ve responded in this way.”

Dykes added: “Obviously I wanted to impact the game, I was disappointed I wasn’t starting. The manager went with Che (Adams).

“But I came on, I changed the game and got two goals and we got three points so it’s good.”

After a minute’s applause before kickoff to mark the death of Queen Elizabeth II, Scotland should have taken an immediate lead when Che Adams shot straight at Ukraine keeper Anatoliy Trubin.

Scotland’s fast start had Ukraine pinned back and the chances kept coming.

Christie headed over from Stuart Armstrong’s cross and Armstrong forced a fumbled save from Trubin.

Scotland’s momentum was interrupted when Everton defender Patterson was stretchered off with a possible knee injury.

Mykhaylo Mudryk should have capitalised on a wayward clearance from Craig Gordon but his scuffed finish saved the Scotland keeper’s blushes early in the second half.

Clarke’s team kept pressing and came within a whisker of breaking the deadlock as Adams headed McGinn’s cross onto the bar before the striker’s follow-up was saved by Trubin.

By the time Armstrong headed another good chance wide it seemed Scotland were destined for a frustrating night.

But McGinn rewarded Scotland’s relentless pressure in the 70th minute as the Aston Villa midfielder rolled his man inside the area and fired into the far corner.

Ukraine appealed for a foul but the referee did not check the monitor after getting advice from his video assistant.

Scotland were rampant and Dykes headed his second goal from another Fraser corner in the 87th minute. - AFP