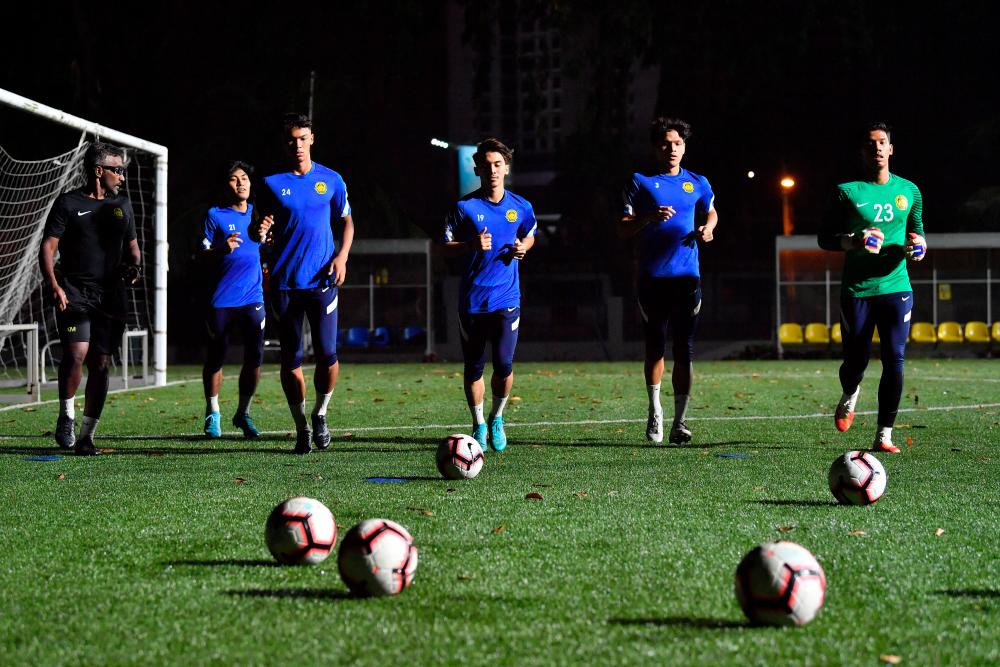 KUALA LUMPUR, April 19-The Under-23 (B-23) football squad underwent training on the first day of the B-23 squad’s training in preparation for the Hanoi Vietnam SEA Games at Wisma FAM.

PETALING JAYA: Only five of the 31 Under-23 squad players called up for the Hanoi SEA Games centralised football training camp reported for duty at Wisma FAM last night.

With the exception of foreign-based strikers Luqman Hakim Shamsudin and Muhammad Hadi Fayyadh Abdul Razak, who are expected to arrive here next week, the rest are Malaysia League (M-League) players.

Head coach Brad Maloney, however, hopes that all the other players, currently featuring in the Super League and Premier League, will check into camp in the coming days.

“There’s always a possibility (of clubs not releasing their players). Currently, we are in discussion with the clubs, so I believe the players will report for duty... it’s just a matter of when they (players) are available,“ he told reporters at Wisma FAM last night.

Maloney believes he could achieve something at the biennial Games, to be held from May 12-23, provided the Football Association of Malaysia (FAM) can assemble the best team possible.

He also explained that Muhammad Hadi, who plays for Azul Claro Numazu of Japan in the J3 League, and Luqman Hakim, who features for KV Kortrijk in the Belgian First Division, will report for duty on April 25 and April 29 respectively.

“I know Luqman very well. I have worked with him many times... he’s a valuable asset to this group (and) he’s always willing to play for the country.

“As for Hadi, we haven’t called him up for a year. To be fair, he has recovered from a recent injury, so he’s back playing and training. Now, we just want to have a good look at him and assess his fitness when he arrives,“ he said.

Meanwhile, Selangor FC goalkeeper Sikh Izhan said he was ready to give his best in training so that he would be picked to play in the SEA Games.

“The next few days will be good for me to train and stay focused... the coach too will be able to focus on me during training so that I can improve bit by bit,” he said.

According to the initial plan, Maloney’s charges are expected to play friendlies against their Under-23 counterparts from Timor-Leste on April 23 and April 29 and the Philippines on May 1 before the final 20-man squad leave for Hanoi on May 4.

Drawn in Group B, Malaysia will take on Thailand on May 7 followed by Laos (May 11), Singapore (May 14) and Cambodia (May 16) at the Thien Truong Stadium in Nam Dinh. Only the top two teams from each group will advance to the semi-finals.

Malaysia, who won the silver medal in the 2017 edition on homeground, failed to get past the group stage in the 2019 edition in the Philippines.

The last time Malaysia won the ‘mother of all medals’ in the biennial Games was in the 2011 edition in Indonesia, with head coach Datuk Ong Kim Swee guiding them to victory. - Bernama