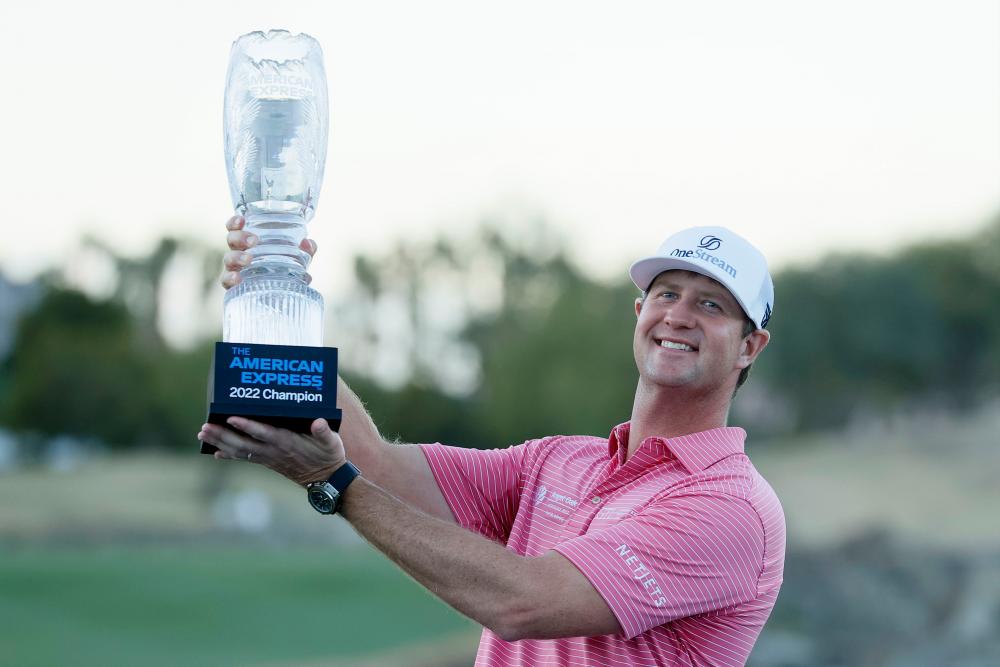 LA QUINTA, CALIFORNIA - JANUARY 23: Hudson Swafford celebrates with the winner’s trophy after winning The American Express at the Stadium Course at PGA West on January 23, 2022 in La Quinta, California. AFPPIX

LOS ANGELES: Hudson Swafford roared to his third PGA Tour victory on Sunday, shooting a final round 64 to win The American Express by two strokes over runner-up Tom Hoge.

Swafford capped his roller-coaster final round with his first par on the back nine at the 18th hole after seizing control with an eagle on 16 and a birdie on 17 in the California desert.

The 34-year-old American also had four birdies and two bogeys on his back nine to finish with a 23-under 265 and post his second victory at the La Quinta Country Club to go along with his 2017 win.

His other PGA Tour win came at a tournament in the Dominican Republic in September.

“To win twice is pretty amazing,“ said Swafford, who earned $1.3 million for the victory. “I had a good par on the last. I was hitting it so good all day.

“I was just trying to stay a little taller in my posture. The way I have been rolling it this week I knew if I just kept giving myself chances I would be fine.”

This is the first tournament of 2022 in the mainland US following two weeks of competition in Hawaii.

Three players were one stroke back tied for sixth, including Italy's Francesco Molinari, who shot 68 after three straight rounds of 67.

Swafford made bogey on his opening hole then birdied the par-four second in a sign of things to come. He parred the next two holes then made birdie on three of his final five holes on the front nine.

He rolled in three straight birdies to begin the back nine then then drained another birdie on 14 sandwiched between a two bogeys on 13 and 15.

On the par-five No. 16, he hit his 198-yard second shot to six feet from the hole. He one putted for eagle to take a two-shot lead over the field and cruised from there.

“I took a couple of deep breaths after that bogey (15th hole) and hit a perfect number seven iron and then made that clutch putt,“ Swafford said of his eagle. “I knew I had to be patient because on this course anything can happen.” - AFP